Jaws is the essential summer movie. It spawned iconic theme music, a ride, this parody song that actually charted in the 1970s and a widespread fear of the ocean. But everyone knows that sequels rarely measure up to the original, and Jaws is no exception. Because the movie and all its follow-ups hit Netflix this week, many are wondering if the three ensuing films are even worth the time.

But before you decide that nothing could ever meet your love of this quintessential monster movie and opt instead for Velvet Buzzsaw, the latest Netflix original thriller that stars Jake Gyllenhaal as a bisexual art dealer named Morf Vanderwalt (O.K. that does sound pretty good), there are a few things you should know about Jaws 2, 3 and 4. Observer did the good work (spent a weekend watching shark movies) and has reemerged with your ultimate viewing guide for these shameless knockoffs.

Jaws II brings us back to the town of Amity Island where the terror all began. We find sheriff Martin Brody (Roy Scheider reprising his role) and the townspeople rebounding from the original attacks, when beachgoers start disappearing all over again…

With a budget of $30 million (the first was $9 million), Jaws II offers plenty of fan service. It again features John Williams’ scores, there are ambitious set pieces throughout and plenty of fun attack scenes (Sheriff Brody standing on the beach shooting a pistol at the ocean, a skier accidentally dumping gas all over herself before using a flare gun, you get the idea). Plus it has one of the best taglines in movie history.

But without Spielberg at the helm, something is missing. Jaws II lacks the wit and lingering terror of the original, and overcompensates by having a lot of screaming teenagers. Really, there are too many teens. It’s hard to keep track of them! The film also makes the critical mistake of showing too much of the animatronic shark, disobeying that Hitchcockian mantra about leaving the monster up to the imagination (ask any film student, they’d love to tell you about this theory). But overall, it’s a satisfactory deep-sea slasher and it’s great to be back with the gang.

Final verdict: Worth watching if you love Jaws.

Jaws 3-D is a hard pivot into B-list waters. The film is set at Seaworld, where the employees, including a young Dennis Quaid, must work to capture a 35-foot great white that has infiltrated. In other words, we’re far from the shallows now.

Featuring terrified park goers trapped with the rogue creature, the film is essentially Jurassic Park if Jurassic Park didn’t make sense. At the very least, it’s a great way to indulge in some enjoyable theme park set pieces, cute animals (including adorable dolphins who have a better fate than most of the humans) and early 3-D technology. Like, very early. This was one of the first modern uses of 3-D in film, and theater audiences were treated to some ham-fisted “high-tech” moments, including a shark bursting through glass and a severed arm that floats on screen for what feels like 20 seconds. The novelty of these effects is fun in a campy way, but it’s a pretty unhinged ride.

Final verdict: Worth watching if you love camp, ocean conservation and 3-D.

Jaws: The Revenge follows Ellen Brody (Lorraine Gary), the wife from the first two films, who is mourning her husband as he apparently had a heart attack from seeing a shark. She is now convinced this shark has a vendetta against her family. Also apparently there is a telepathic link between them. Ellen and the shark.

Jaws: The Revenge offers a sea of continuity errors, nonsensical dialogue and…Michael Caine? Yes, the film stars Caine at his prime as a pilot and love interest. Due to reshoots, he was unable to collect his Oscar for Hannah and Her Sisters that year. Also, the film was made in less than nine months. It’s almost impressive how far and how quickly the franchise can fall.

Final verdict: Stream Velvet Buzzsaw instead. Save yourselves! 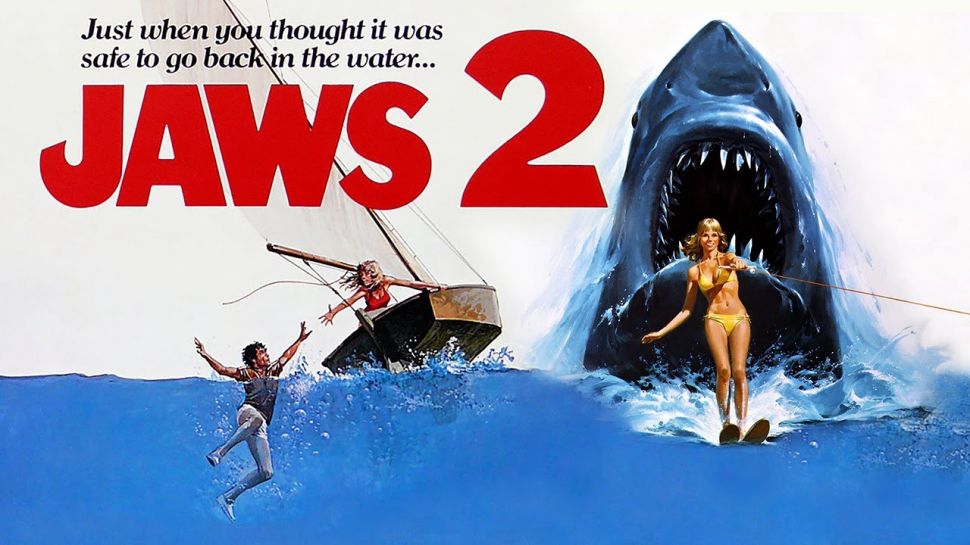