Amazon CEO Jeff Bezos rocked American politics yesterday by exposing an effort by his nemesis American Media Inc., publisher of The National Enquirer, to blackmail the multibillionaire mogul. By publicly taking on the country’s most notorious scandal sheet, Bezos opened the door to an espionage scandal that threatens to rock the nation’s capital and beyond.

Posting salacious accusations of criminality on the web is no routine matter, especially when it’s the world’s wealthiest man doing it, but that’s just what Bezos did by explaining that AMI  attempted to coerce him into stopping his investigation into The National Enquirer’s activities.

This sordid saga burst into public view last month, when The National Enquirer published a salacious account of Bezos’ extramarital affair, complete with images of private text messages of an amorous nature between the Amazon CEO and his mistress. Bezos and his wife of 25 years soon announced their intent to divorce.

Not surprisingly, Bezos wanted to know how AMI got hold of his private messages, and when you’re worth upwards of $130 billion you can hire top-notch investigators. That’s when things got interesting. The National Enquirer isn’t accustomed to being in the hot-seat when it comes to having secrets exposed, since their business model is based on being the exposer, not the one being exposed. AMI, whose acquaintance with journalistic ethics can charitably be termed fleeting, has secrets to hide in this high-profile case.

That was made clear by emails which Bezos cut-and-pasted into his blog post, an exchange this week between AMI’s lawyers and those representing the Amazon CEO. Briefly, AMI demanded that The Washington Post, owned by Bezos, not run a planned story revealing how The National Enquirer obtained Bezos’ private messages. This demand included an alarmingly detailed list of personal photos sent by Bezos to his mistress, now in AMI’s possession, including images that would fall under the “dick pic” descriptor.

That didn’t work, so AMI returned fire with an ominous warning: “Any further dissemination of these false, vicious, speculative and unsubstantiated statements is done at your client’s peril.” Leaving it to attorneys to decide whether that threat rises to the level of criminal conduct, such a statement surely constitutes blackmail as understood by the public. Certainly, none of AMI’s behavior here resembles legitimate journalism. Then, Bezos struck back and wrote up his blog post.

None of which answers the question of how AMI obtained Bezos’ private electronic communications, dick pics and all, in the first place. Here politics enters the drama in an indelible manner. President Donald Trump stands in the background of this scandal, perhaps in more than mere outline. David Pecker, AMI’s boss, is a longtime friend of the president who for years has employed his seedy media empire to protect Trump, specifically by using “catch and kill” to buy off and silence those, especially women, seeking to expose Trump’s private behavior.

Trump hates Bezos and has repeatedly criticized the mogul and his newspaper on Twitter in vehement terms. His tweet on the heels of The National Enquirer publishing Bezos’ texts last month is vintage Trump, mocking and threatening in equal measure: “So sorry to hear the news about Jeff Bozo being taken down by a competitor whose reporting, I understand, is far more accurate than the reporting in his lobbyist newspaper, the Amazon Washington Post. Hopefully the paper will soon be placed in better & more responsible hands!” The timing and content of this “modern presidential” tweet raise many questions now.

A hint where this scandal is headed appeared last night when a Post reporter revealed on MSNBC that Gavin de Becker, the security guru to the stars whom Bezos hired to look into AMI, “told us that he does not believe that Jeff Bezos’s phone was hacked, he thinks it’s possible that a government entity might have gotten hold of his text messages.”

Let’s unpack this important claim. In the current age, when Team Trump immediately points fingers at the alleged Deep State as the secret evil force behind everything they dislike, we need to assess how realistic de Becker’s assertion is. If any state entity is spying on Jeff Bezos and leaking his purloined communications to third parties in the media, that’s legitimately alarming for privacy and personal liberty in America. Because if they can do it to the richest guy on earth, they can do it to anybody.

Suspicion inevitably falls on the National Security Agency, but that appears highly unlikely. In the first place, the NSA could only monitor Bezos’ private communications if they got federal judges to issue a warrant under the Foreign Intelligence Surveillance Act, which is granted solely in cases involving foreign espionage or terrorism. Which seem like things the Amazon CEO is awfully unlikely to be involved in. Moreover, the agency shreds intercepted personal chats without intelligence value, while any FISA reports are exceptionally closely guarded by the NSA.

What about the FBI? That, too, seems far-fetched. It’s difficult to imagine that, when you’ve made over $100 billion legitimately, you would need to resort to crime to make more, and that’s the only way the bureau gets permission to tap your communications. Plus, the FBI is no more likely than the NSA to leak classified intercepts to the media, especially to scandal-mongers like AMI.

It cannot be doubted that certain Trump White House staffers would leak such salacious messages to Pecker’s minions in a New York minute, but it can be all but ruled out that they got them from anybody in the U.S. Intelligence Community. Not to mention that, per Trumpist mythology, the Deep State is their mortal enemy, not their partner in outing the liberal media the president so loathes.

Of course, de Becker’s assessment does not specify whose government entity was behind this. Longtime readers of this column know that technically savvy foreign intelligence services certainly have the capability to spy on Americans, and some of them are active inside the United States. The list of first-rate spy services that are known to target Americans, and which are operating here, is led by Russia, China and Israel.

Moscow’s close and mysterious relationship with our president is no secret to readers of this column, so Russian covert involvement needs to be seriously considered here. Amazon has large-scale ambitions in China, and perhaps those led to concerns in Beijing, which conducts aggressive espionage operations inside the United States too. Israel has close connections to Team Trump, including questionable ties between members of the president’s inner circle and individuals known to have a tight relationship with Israeli intelligence.

Another suspect is Saudi Arabia, which incurred the wrath of The Washington Post by murdering and dismembering their columnist Jamal Khashoggi in Istanbul last October. Bezos referenced that awful crime in his blog post, including the line, “Pecker and his company have also been investigated for various actions they’ve taken on behalf of the Saudi Government,” explaining that AMI is seeking Saudi funding. Bezos added, “Several days ago, an AMI leader advised us that Mr. Pecker is ‘apoplectic’ about our investigation. For reasons still to be better understood, the Saudi angle seems to hit a particularly sensitive nerve.”

The Amazon CEO is more than hinting that Riyadh is mixed up in AMI activities in a nefarious way, something which Pecker is desperate to obscure. If Saudi intelligence possesses the ability to intercept text messages inside the United States, that may be the key to this mystery. Here the Kingdom’s close security relationship with Israel perhaps provides a clue. Israeli security firms sell cutting-edge espionage software and interception gear to countries all over the world, Saudi Arabia included.

In 2017, the Israeli firm NSO Group sold Riyadh a $55 million spy program termed Pegasus which hacks smartphones to obtain their contents. This capability was desired by Crown Prince Mohammed bin Salman to spy on his enemies abroad—including, it seems, the doomed Jamal Khashoggi. Since somebody appears to have hacked Jeff Bezos’ smartphone and passed its salacious contents to The National Enquirer, the Saudi angle is one which investigators are pursuing with vigor right now. If foreign intelligence services are collaborating with gossip merchants to smear private citizens and silence critics, that’s an alarming development which one expert recently termed super-doxxing, and it’s something which all Americans should be concerned about. 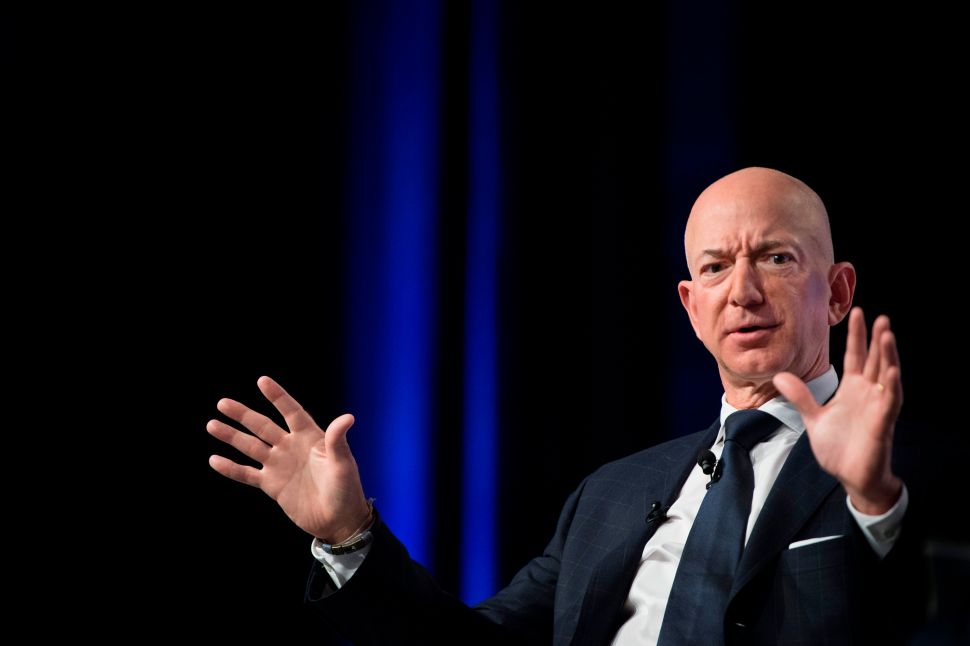