John Cornyn, the Republican senior U.S. senator from Texas, spent Sunday in the ratio barrel. His offense: tweeting a quote from the well-known and respected thought genius Benito Mussolini.

“We were the first to assert that the more complicated the forms assumed by civilization, the more restricted the freedom of the individual must become.” Benito Mussolini

Il Duce, Italy’s far-right fascist dictator (whose poster Hitler had on his dorm-room walls) is as famous for getting Italy’s trains to run on time as he is for imprisoning and murdering his leftist opponents. He was pretty “good” at both!

It wasn’t immediately clear which of Mussolini’s qualities it was that Cornyn most admired or why, exactly, he was tweeting nuggets of wisdom from right-wing dictators in order to own the libs—nor was it immediately certain what he was doing on his iPad on a Sunday morning that led him to read and post Mussolini.

A few hours later, after a well-known Texas journalist kindly demanded to know exactly what the senator meant by posting pearls from a fascist dictator out of context, Cornyn clarified that he did in fact mean that fascism is socialism, or whatever.

You nailed it, Bud. Since so-called Democratic Socialists have forgotten or never learned the lessons of history, and how their ideology is incompatible with freedom, I guess we have to remind or teach them. https://t.co/ftzal1DMED

In a modern-day American context, with socialism on the rise and with the right increasingly McCarthyist in its open redbaiting, posting a Mussolini quote is either a tone-deaf move from an applesauce-brained ninny or the opening act for a Pinochet revival.

Though intellectual sleuths had an idea, it wasn’t until Cornyn further explained himself on Monday that the intellectual genealogy of this boss move became clear.

That Mussolini quote appears, in English, in recent writings from conservative thought leaders in praise of the Austrian political philosopher Friedrich Hayek.

And, turns out, quoting Mussolini in this way in order to own the libs—in order to show that authoritarian fascism is the same thing as socialism, which President Donald Trump and his enablers like Cornyn have come to interpret as “anything left of center”—is something the right does in America, and has been doing for a while.

Hayek, a 1974 Nobel laureate, was a lifelong skeptic of state-run markets, and argued in a 1944 book called The Road to Serfdom that tyranny is the inevitable result of a state-run planned economy. (Hayek was also a starry-eyed fan of Pinochet, the brutal Chilean dictator who toppled a democratically-elected socialist government in a U.S.-backed coup and who, like Mussolini, murdered his political opponents.) For this, and for his bonus argument that fascism was not a capitalist reaction to socialism but in fact socialism and fascism were very similar things, Hayek and his ideas have been elevated to cult status among conservative and libertarian free-marketers.

Margaret Thatcher, for example, absolutely loved Hayek, and used Hayek as the intellectual cudgel to dismantle Great Britain’s Keynesian-style social welfare state (or to at least absorb state functions into the market). “This what we believe,” Thatcher is said to have declared while dropping a Hayek book onto a table during a Conservative Party meeting in the 1970s.

Ronald Reagan absolutely loved Margaret Thatcher and used her policies as a model for his own great era of deregulation and privatization. For these reasons—for putting his thought into trickle-down action—Hayek absolutely loved Reagan, whom he apparently considered a real intellectual, according to the mutual admiration society over at the Cato Institute.

It’s important to note that in the interpretation of modern-day American conservatives, anything that is not the free market is automatically socialist. National parks? Socialist. Privatize them. Universal health care? Socialist.

Hayek loved the market so much that he once suggested that democracy could be dispensed with as long as there were no limits on capitalist activity. He died at exactly the right moment to be venerated as a genius and a right-wing saint, in 1992. The Soviet Union had just collapsed and capitalism had yet to enter its current crisis, with income inequality out of control and socialist policies gaining increasing traction in America.

Cornyn might not have known any of this before posting his applesauce-brained tweet. All you need to know is that the conservatives have a guy who thinks socialism and fascism are the same thing, and even though this harebrained syllogism falls apart at the slightest inspection, its creator remains one of the right’s intellectual heroes. This is not the first time a conservative free-marketer has invoked right-wing dictatorship to own the left, and it will not be the last. 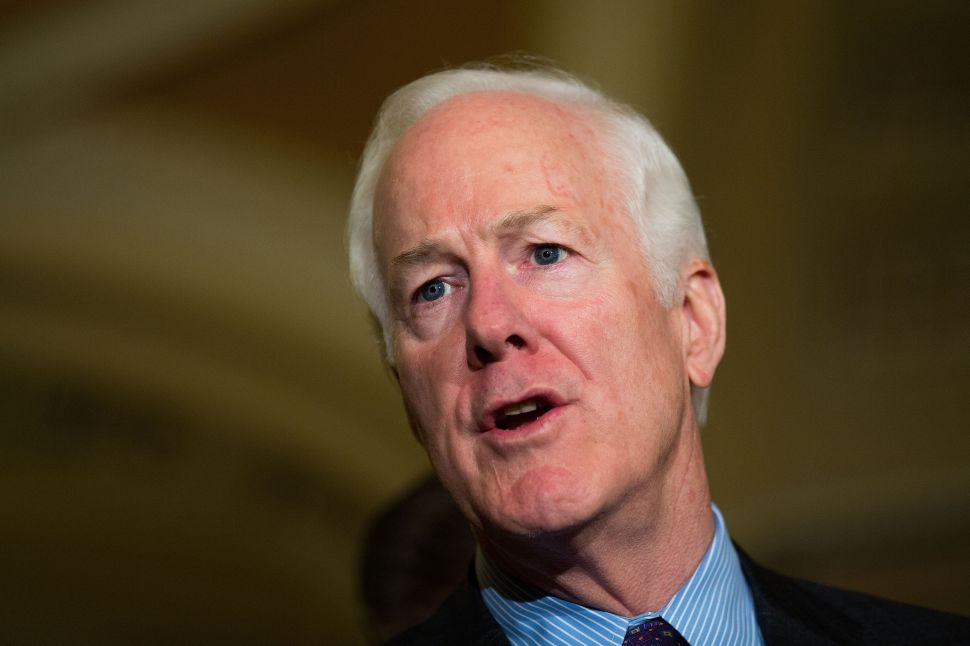