Being invited to join a member’s club in New York has become a rite of passage. It announces that you’ve made it, both in terms of social status and financial means. And in 2019, there’s a selective society for all types. There’s Soho House for entrepreneurial millennials who Juul, The Wing for ladies (and a few men) who lunch over their MacBooks, leading all the way up to the Commanderie des Côtes du Rhône, a circle for individuals with deep pockets and expansive cellars.

Joss Sackler is a member of the latter, having belonged to a number of wine societies that were simply too stuffy for her taste. But the 34-year-old longed for the community that comes with those member’s only scenes, along with the entertaining events that they hosted. So she decided to launch one of her own in 2016, naming it LBV and anointing it a women’s only affair. After all, her beloved wine societies notoriously feature a crowd that is predominantly male; the only women that attend their black-tie dinners are wives and girlfriends.

“It started off really small, like five of us would get together for dinners,” Sackler told Observer about LBV, over a spread of tea and strawberry ice cream at The Pembroke Room in the Lowell Hotel. “We would do wine pairings with fine dining and take turns hosting it at each other’s homes. In the beginning, it was about five of us, but it quickly grew to 12.”

The membership has mostly grown via word-of-mouth and there are now 50 or so LBV members, including fashion designer Elizabeth Kennedy, artist CJ Hendry, Sharon Bush, and fashion stylist and Taylor Swift bestie Ashley Avignone. Originally started (and currently still flaunted as) a group for women, LBV has allowed a select crowd of men in. Bill Helman, a venture capitalist, was the first to be inducted into Sackler’s club, followed by Dogpound founder Kirk Myers, artist Will Cotton, Washington D.C. financier Brian Jacobowski and Seth Weissman, the real estate developer and investor who is married to fashion designer Joseph Altuzarra.

The members, who range in age from their early 20s to their mid-70s, are split into two distinct tiers. Core members shell out $2,500 per year in dues and are given first access to LBV’s four annual dinners. Secondary members, who are on the Social Tier, pay just $500 annually and tend to stick to the more casual events, which have included private workouts at Dogpound, a pre-NYFW showroom visit with designer Prabal Gurung and a wine and food pairing dinner with Michelin-Star Chef Gunter Seeger. While having a stacked wine cellar is certainly a plus among the LBV crew, Sackler maintains that it’s not required for membership.

However, it’s the lavish dinners that are the biggest draw for members. LBV was the first to hold an event in the private room at the freshly renovated Four Seasons in September 2018. For that feast, Sackler had the vision to recreate the sparse outline of a house from Fergie’s “Enchanté” music video, which starred Kendall Jenner and was directed by Bruno Ilogti. But rather than tapping some major production company, Joss hired the super of her Manhattan building to construct the entire art installation. Another dinner served as a screening for the VR documentary Capturing Everest. Guests donned VR headsets and watched the film on the rooftop of the Wythe Hotel to celebrate the feast in honor of the film’s stars: Lisa Thompson, the first all-American woman to summit K2 (who is an LBV member), Garrett Madison, the “it” mountain guide for those with adventurous hearts and money to spend, and videographer Andrew Tierney.

Sackler perfectly fits the profile of her fellow LBV members. On the day she met with Observer, the pert, young blonde bounded into the posh tea room wearing a fuzzy pink sweater and jeans, with one of her young children in tow. In her downtime, Sackler is an avid climber, as promoted on her Instagram, and is extremely well-connected in the New York social scene. She refers to her dissertation in linguistics from CUNY as a point of reference for some of the art installations that she’s created through LBV and does appear to be rather low-key.

“She’s got three young kids, but she’s also real careful about being a mom,” explained LBV member Brian Jacobowski. “When they fly they take JetBlue, because they don’t want the kids to feel entitled or privileged, but that means her and her husband have to fly JetBlue!”

If the last name Sackler sounds a bit familiar, perhaps it’s because you heard about photographer Nan Goldin’s protest at the Guggenheim earlier in February. The artist’s act of defiance was used to portray her feelings towards the very wealthy and widely philanthropic Sackler family who built a dynasty by founding Purdue Pharma—a company best known for creating OxyContin, the painkiller that has shaped the opioid crisis that is currently raging across the country. Joss is married to David Sackler, the grandson of one of the three patriarchs that founded Purdue, who now sits on the company’s board of directors.

Despite the notoriety of the Sackler family name, there’s not much about Joss and David’s personal lives online, save for a few mentions that they are “fixtures in New York charity and fashion circles” and that they own a handful of multi-million dollar homes in all the familiar moneyed enclaves.

But members weren’t discussing much of wine, real estate or national health crises over champagne at 1 p.m. on a Wednesday. The topic at hand was actually a pair of neon-hued bike shorts. Such was the scene on the very last day of New York Fashion Week when Sackler debuted her very first fashion range.

Sure, Sackler is an avid couture collector but that doesn’t make one primed to step into the role of a fashion designer. Which raises some questions. Such as, how does a range of blinding yellow sweatshirts and lace skirts directly align with a social club? And who designs the LBV collection?

“Everything in LBV is tailored to what the members say they want,” Sackler explained. “I want to give every member the best experience, so it’s constantly changing.” The first piece she designed for members was an 18-karat gold-plated cuff bracelet, designed in partnership with Caliber Collection (a jewelry brand from LBV member Jessica Mindich) to be a chic update on the tastevin that’s traditionally worn around the neck of members of a wine society—this one came with a $3,500 price tag. Next up was a wine tote, of course. But this wasn’t your standard run-of-the-mill cotton tote bag—Sackler wanted to create a sumptuous leather bag that her well-heeled members would be proud to carry to one of LBV’s boozy events.

As for the clothing line, well, Sackler likened it to a club uniform, thought LBV doesn’t have an actual clubhouse to call their own. Sackler was also coy about disclosing who helped her design the range, simply attributing the pieces to “an LBV member with a strong background in design.” The two came together to bring Sackler’s vision for outdoorsy silhouettes with polish to life. That resulted in an abundance of neon yellow and black spandex shorts, lots of unlined lace skirts topped with oversized white button-downs, sweatshirts ranging in length from cropped to knee-skimming and sweatpants. Nearly every item was stamped with the LBV logo, delivered in a simple sans serif font. In terms of accessories, there were boxy backpacks with a multitude of metal loops and clips, plus an evening purse with a hefty gold chain. It’s not quite a cohesive fashion line, but it certainly hits the marks when it comes to status athleisure—you know, the type that brazenly exudes that fact that you dropped a lot of money on sweatpants.

The athletic-inspired items were a big push for Sackler, who is an avid climber that has ascended two of the seven summits. “I really wanted the materials to be tech stuff, like -resistant, and the jackets I want to be able to wear on the mountain or to Barneys,” she explained. She also referred to her role as a mother of three as a source of inspiration, which explains the functional hardware on the backpacks and the roominess of the tote. Sackler sees herself carrying those for the early morning school drop-off.

How pricy will these wares be? “It’s like Victoria Beckham or Céline pricing,” Sackler said. And the range won’t just be relegated to LBV members, but it will be offered on the club’s website and touted as a direct-to-consumer business. Going forward, the plan is to release two collections per year, with sporadic drops in line with the streetwear business model.

Sackler is already planning for the future, too. “I already know what I want to do for the next collection: it’s rodeo cowboy. I’ve been climbing with this cowboy hat that’s leather, and [when] rocks fall the leather is hard enough to protect you, like a helmet. The designs will be like the Marlboro man, but I want it to be for a Marlboro woman, with a trench and a great bag,” she said. Hopefully it will pair better with a fine wine than yellow neon does. 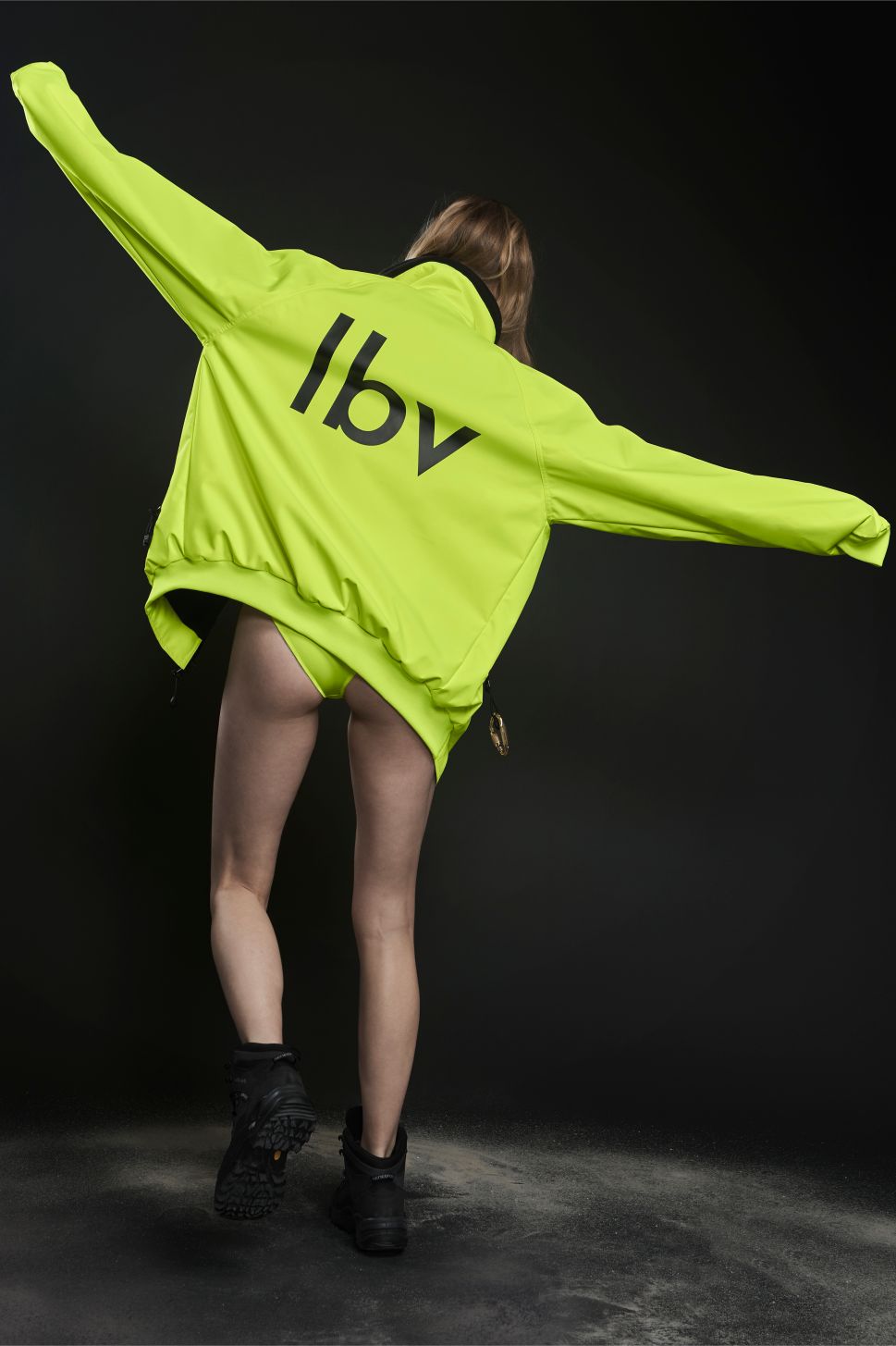