Imagine that in the early 1960s Stephen Sondheim had been part of a comedy act. It was quite an eclectic group: urbane, intimate poetry by Frank O’Hara; mordant sketches by Nichols and May; brainy, satirical songcraft by Tom Lehrer. This fantasy troupe, let’s say, put on shows that were utterly modern, experimental, and set a template for a new mode of comedy—not to mention delivery of plot and theme. Out of this crucible of talent the composer-lyricist emerged with his genius for emotional nuance, razor wit, and intellectual brio. We could look back and think: Ah! That’s where the “Sondheim musical” sprang from.

Of course, no such group ever existed. But rap-improv troupe Freestyle Love Supreme has been spitting instant rhymes and dropping gonzo beats for more than 15 years and, seeing them finally (my bad), you get a new understanding of the phenomenon known as Lin-Manuel Miranda. It takes nothing away from the actor-lyricist-composer’s epic achievement with Hamilton to say you can see its seeds in FLS when they transform word cues and anecdotes from the audience into full-blown hip-hop mini-dramas. This was the school, and Hamilton was Miranda’s game-changing dissertation: harnessing the data-crunching power of rap to distill and distribute a book’s worth of ideas and attitude.

Miranda is a founding father of FLS, along with college friends Anthony Veneziale (now an improv veteran) and Thomas Kail (who directs). The current iteration of the show at the Greenwich House Theater was produced by Miranda, and features Veneziale (Two-Touch) as our de facto host and guy who gooses the audience for fresh material along with moody and deadpan Utkarsh Ambudkar (UTR), Chris Sullivan beatboxing the crap out of the mic as Shockwave and, as guest performer, Christopher Jackson (C-Jack), who Hamilfans know better as George Washington. Miranda has surprised audiences with guest appearances, but I wasn’t so lucky. Not complaining: I love me some G-Wash.

Describing—much less reviewing—75 minutes of hip-hop improv is a bit like trying to capture the essence of what happened on a street corner with six world-class buskers on a particularly inspired night: so brilliant, so ephemeral. The world’s best stenographer couldn’t keep up with the rapid-flow of newly minted, slangy couplets and internal rhyme chains. So, what happened? The group solicited a word from the crowd, and amid the weird, the silly, and the banal, they seized on “thatch.” Hence an opening salvo that literally and figuratively explored the verse connotations of interwoven lines. Before long we got a fast-and-furious trio with each MC riffing on more audience suggestions: C-Jack twisting “collusion” into a spirited defense of Colin Kaepernick, UTR rapping about his Jeff Goldblum obsession, and Two-Touch giving a history of Hawaii, replete with cannibal puns on the fate of that notorious colonizer, Captain James Cook.

A story from a woman about the time her eight-year-old daughter backed the Nissan down a hill and nearly into the sea becomes a domestic dramedy, that morphs into a mermaid fantasy, and ends up on the lawn of the White House circa 2009, right before Lin-Manuel Miranda is about to perform an excerpt from his new musical for the Obamas. Quick: What rhymes with ouroboros?

Later there was a number keeping it real while singing the bluesy joys of Netflix (killer soul chorus by Arthur Lewis a.k.a. Arthur The Geniuses). Finally, the crew re-created the day in the life of an audience member, a forthright executive advisor named Nikki, who returned a jacket in Soho, played canasta and bossed her boyfriend around to hilarious effect. If it seems like an impossible mental and vocal feat, creating songs and vignettes that hang together despite the fact that the building materials were just supplied that instant, well…the boys have help. The running order and some songs follow a template, but they still have to slot in new words and narrative on a dime, keep to the beat, strain to maintain the euphony and be funny, so all the people can see—and yup I will be keeping my day job.

If this doesn’t seem amusing, I’m not apologizing: You had to be there. So be there. And yet, I can’t recommend the show I saw; it’s gone. The minute Shockwave spits a series of plosive lip-smacks and glottals out a wikki-wikki vinyl scratch, or UTR spins a gender-balanced tract out of a mother’s embarrassing memory, and C-Jack shares a long, adorable confession about trying to reduce his kids’ device time, this show is already disappearing into history. Audience members are asked to deposit their phones in a lockable Yondr pouch when they enter the space. It’s not just because producers want to avoid people filming the show and posting on social media. (I certainly could have used a recording to transcribe some numbers.) But there’s a deeper reason for it: You should be present, in the room and in the moment, because that night of lyrical, comical, syncopated genius will soon be mere air. 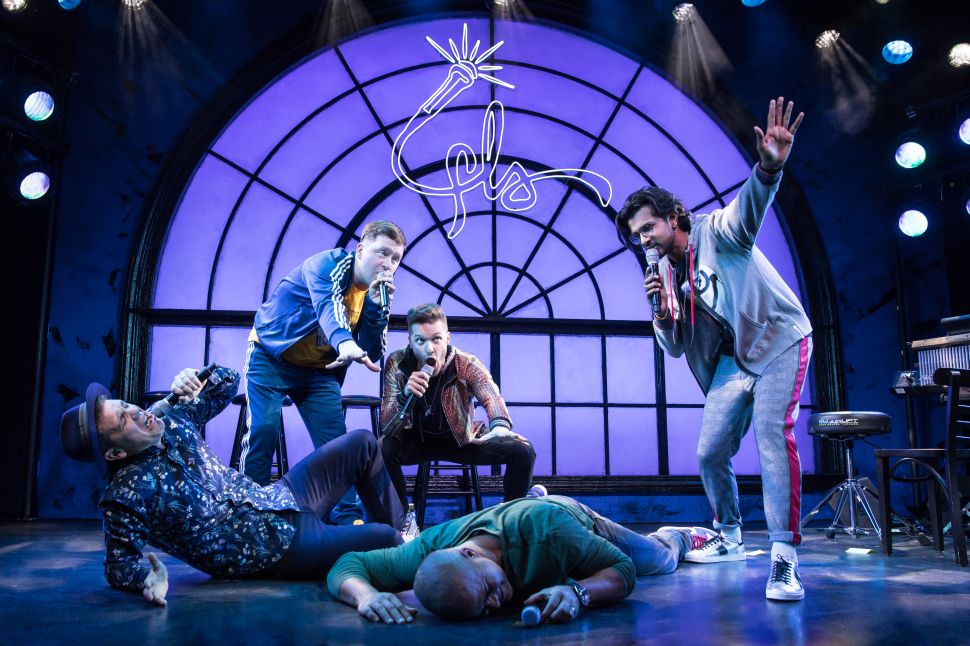