Meghan Markle’s whirlwind trip to New York included stops at Ladurée, Bonpointe, the Surrey and the Polo Bar, but the main event was her over-the-top baby shower at the famed Mark Hotel on the Upper East Side. Markle chose to stay at the luxe five-star hotel for her jaunt to the city, and she went all out with a party fit for a royal. The Duchess of Sussex reportedly stayed in the Mark’s opulent two-story Grant Penthouse Suite, which happens to be the largest in the world—definitely a fitting locale for her celebrity-filled baby shower.

The over 10,000-square-foot suite, designed and decorated by Jacques Grange, comes with a regal price tag of $75,000 per night, and is composed of five bedrooms, eight bathrooms and no less than four fireplaces. There are also two wet bars, because one is simply not enough, as well as a conservatory, library lounge, dining room and a 2,500-square-foot rooftop terrace.

All the custom furniture was designed by Grange, and is entirely unique to the hotel. The living room has 26-foot ceilings, a fireplace and wet bar, and if desired, can be transformed into a full-size grand ballroom. Considering Markle only had about 20 guests, we don’t think that’s entirely necessary, but you never know.

Serena Williams planned the entire shower along with Markle’s longtime friend and former Northwestern sorority pal Genevieve Hillis, according to Harper’s Bazaar, and guests included her pal and stylist Jessica Mulroney, Amal Clooney, Abigail Spencer, Misha Nonoo and Gayle King. King revealed a few details about the fête on CBS This Morning, including that they brought in someone to “explain how to arrange flowers. We all each made an individual vase.” The session was led by Lewis Miller, and the creations were then donated to Repeat Roses, which takes flowers and provides them for those in homeless shelters, hospices and other treatment centers.

If you’re not looking to spend a small fortune on single-night stay, consider one of the Mark’s other accommodations, though you’ll still be handing over a large sum—the 152 rooms and suites at the Preferred Hotels member start at $690 a night.

The Mark is also where you’ll find the Michelin-star restaurant of the same name by Jean-Georges Vongerichten, who apparently provided all the food for Markle’s festivities—perhaps an avocado toast situation. If they needed any extra beauty prep, the hotel also houses a Frédéric Fekkai salon. The New York winter isn’t particularly conducive to outdoor activities, but temperature permitting, guests can also go for a ride one of the hotel’s custom bicycles, only available to those staying at the Mark, with black-and-white helmets and Insta-ready baskets. And let’s not forget about the bespoke pedicabs, with the hotel’s signature black-and-white striped canopies and monogram.

Markle, however, is far from the first famous face to step through the Mark’s classic doors. Indeed, past guests include Emma Watson, Selena Gomez, Oprah, Tom Brady, Gisele Bündchen and Kendall Jenner—it’s a favorite of Met Gala attendees, so prepare for even more celebrity spottings at the Mark this year. 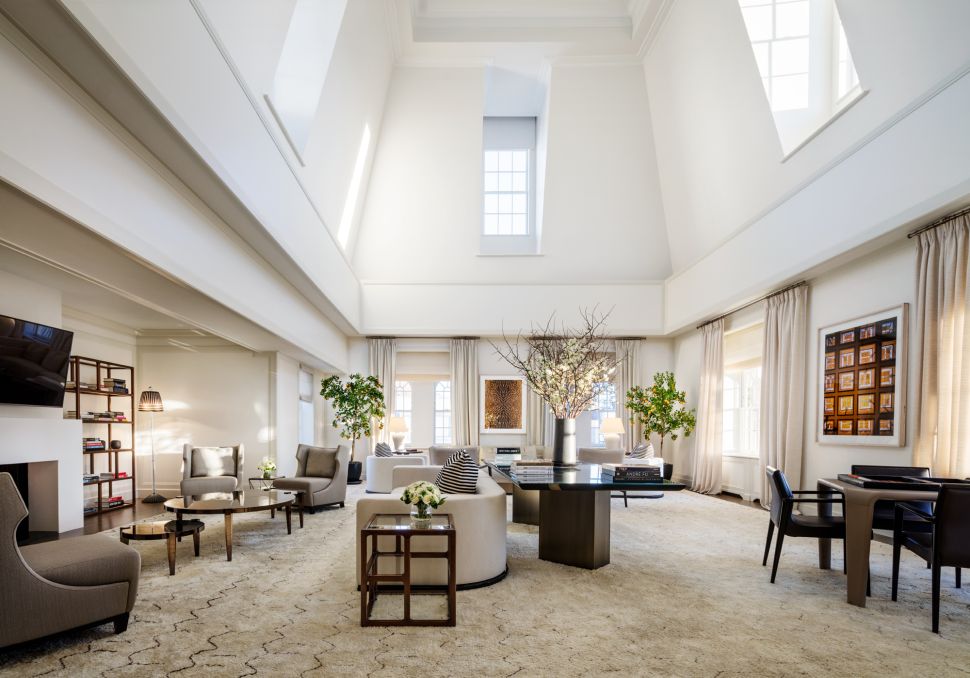