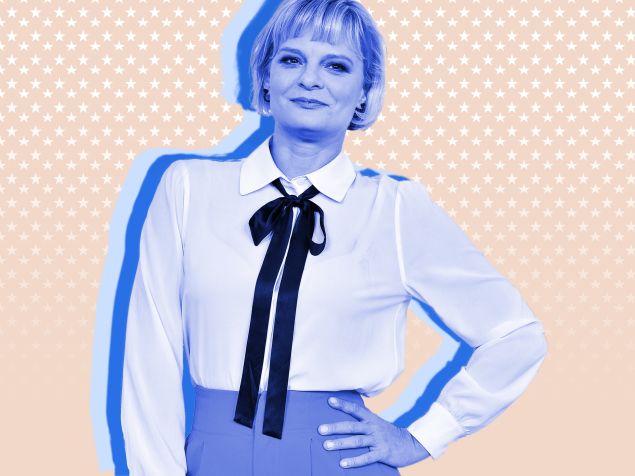 Martha Plimpton has clipped her Twitter wings. In January, the actress flew this social-media coop, leaving behind 192,000 faithful followers as well as irritating trolls who regularly took issue with her politics and pro-choice activism.

The Twittersphere “just eats up your life,” she told Observer. “And your mind. And your time.” And Plimpton, 48, doesn’t like to waste time. She’s booked. First up is All the Presidents Mann, her American Songbook series concert on March 2 at 8:30 p.m. at Jazz at Lincoln Center in the airy Appel Room overlooking Central Park and Columbus Circle. The concept: She pairs Aimee Mann covers with troubled American commanders-in-chief. (So many choices.)

“This is something I came up entirely while sitting in my house and listening to Aimee Mann, and wondering how I can get people to pay me to sing her songs. That’s it,” she says. Nine years ago, her first American Songbook concert came with a wry, questioning title: Martha Plimpton Sings? Yep, she does. Listen up.

But why Mann, a folk-pop singer/songwriter who specializes in love, loss and damaged souls? “Aimee Mann has an extraordinary insight into the human propensity to fuck shit up and ruin a good thing. Which is something I completely relate to,” said Plimpton. “She has a keen sense of justice and injustice. She’s very direct.”

Same goes for Plimpton’s acting, whether on TV in The Good Wife, for which she won an Emmy, or the sitcoms The Real O’Neals and Raising Hope, or on stage in The Coast of Utopia, Top Girls and Pal Joey, which each earned her a Tony nomination. 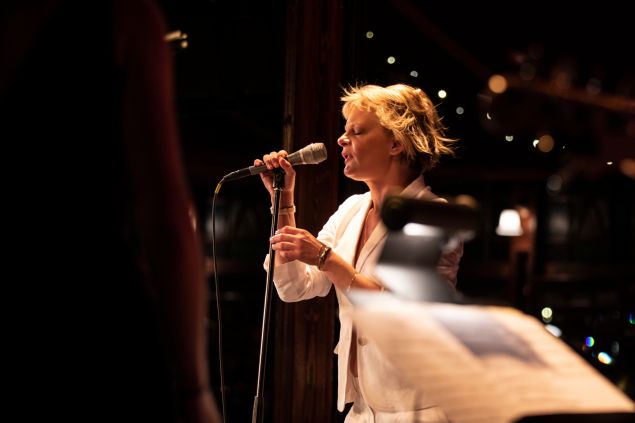 Plimpton debuted the Mann show last year on Presidents Day at Joe’s Pub, followed by an encore performance in the summer at Bard College. Currently she and her musical director “are going through the material,” she says, “adding and dropping songs” so she’s reluctant to say what’s on the set list. But it’s a safe bet that “Save Me” and “Voices Carry” make the cut in the concert threaded, she says, by “presidentiana, little history lessons and odd bits of information.”

Hence, Plimpton has been brushing up on the likes of, say, Harding, Taft and Kennedy. And Trump, who inspired Mann’s “Can’t You Tell,” which came out in the fall of 2016 and amusingly (scarily?) take a first-person view from inside then-White House hopeful’s head. “Isn’t anybody going to stop me? I can’t do this job.”

Plimpton has plenty to say on that score. “The person in the White House now is the most disgusting, puerile, sociopathic, truly deranged pig we could have possibly chosen,” she says. “I’m not too into invoking his horrible, traumatic name right now, but yes, we certainly allude to him in the show.”

In a way, Trump looms in another Plimpton project. In June, she returns to London to reprise her role in the Donmar Warehouse staging of Lynn Nottage’s 2016 play, Sweat, which is transferring to the West End. Toggling between 2000 and 2008, the Pulitzer Prize-winning drama follows close-knit Pennsylvania steelworkers struggling after factory layoffs and shutdowns. Some critics have said Sweat helps explain 45’s win.

“I don’t like polemics. I don’t like plays that drive political points home,” Plimpton says. “Sweat is about relationships.” Last year when she was offered the role of Tracey, a blue-collar laborer, mother and friend, for the show’s two-month run beginning in December, she thought, “Spend Christmas in London? At one of the coolest theaters in town? What could be better?”

As of now, Plimpton is the only cast member announced for the June 7 to July 20 run at the Gielgud Theatre. Acting since she was a kid in films like The River Rat, The Goonies and The Mosquito Coast, she brings decades of life experience to work — as well new insights since taking her mother, Shelley Plimpton, on safari in South Africa for her 70th birthday. The trip sparked Martha’s interest in wildlife tracking, which she’s returned to Africa to learn more about. 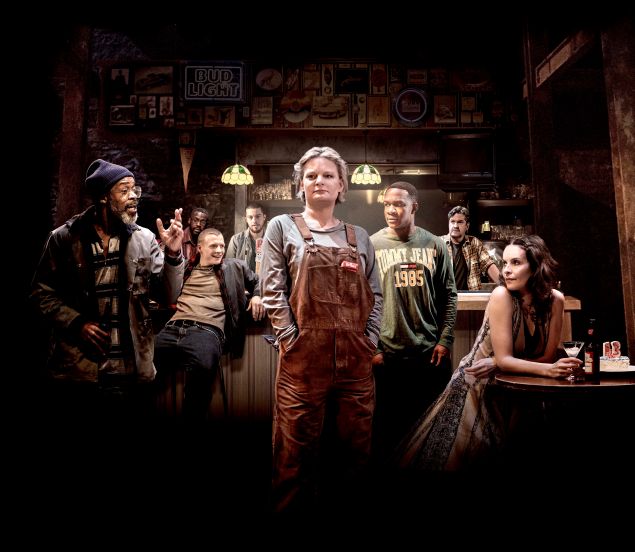 “I’ve developed a real profound interest in and love for it,” she says. “It’s made me better at what I do for a number of reasons. Primarily because it’s about listening…and being extremely well-prepared and ready for anything. It’s about empathy and seeing big picture…and focusing up close. Weirdly, it has enhanced my understanding of what I do.”

That’ll come in handy on April 20 and 21, when Plimpton takes part with more than 20 other performers in Sonnet Walks, a long-standing London celebration of the Bard’s birthday that was the brainchild of Oscar- and Tony-winner Mark Rylance. As audiences stroll through the city toward Shakespeare’s Globe, actors breathe life into the playwright’s speeches and sonnets.

“It’s this really cool thing,” says Plimpton, whose credits include Shakespeare’s Cymbeline and A Midsummer Night’s Dream. “I’m really glad to be doing it this year.”

She’s less thrilled that work takes her away from her Brooklyn house and garden, where 250 bulbs—daffodils and tulips, mostly—planted last fall will pop presently, while prized heirloom tomatoes and cucumbers will be ripe for the picking in summer.

“I love putting my hands in the dirt. I love the miracle of it,” she says. Plimpton posts pictures of her backyard wonders as well as tips (Pests in the garden? “Try Bobbex,” she notes. “Smells like ass but it works!”) for her nearly 41,000 followers on Instagram. “I like Instagram,” she says. “It’s about the pictures.”

As for Twitter, she hasn’t felt even a slight twinge. “I don’t miss Twitter at all. There’s a part of me that would love to use it to support my show. But I don’t want to engage with most people there. I don’t want to engage with most people. I’m an adult woman with a very healthy, wonderful social life. I don’t need the praise or the trolls or any of it. When I’m doing it, I’m always thinking I could be doing so many other things.”

That to-do list includes figuring out precisely what to say if Aimee Mann shows up at the American Songbook concert that she’s inspired. “I would love for her to see the show,” says Plimpton. ”I would also be fucking terrified. But I’d love it. Yeah.” 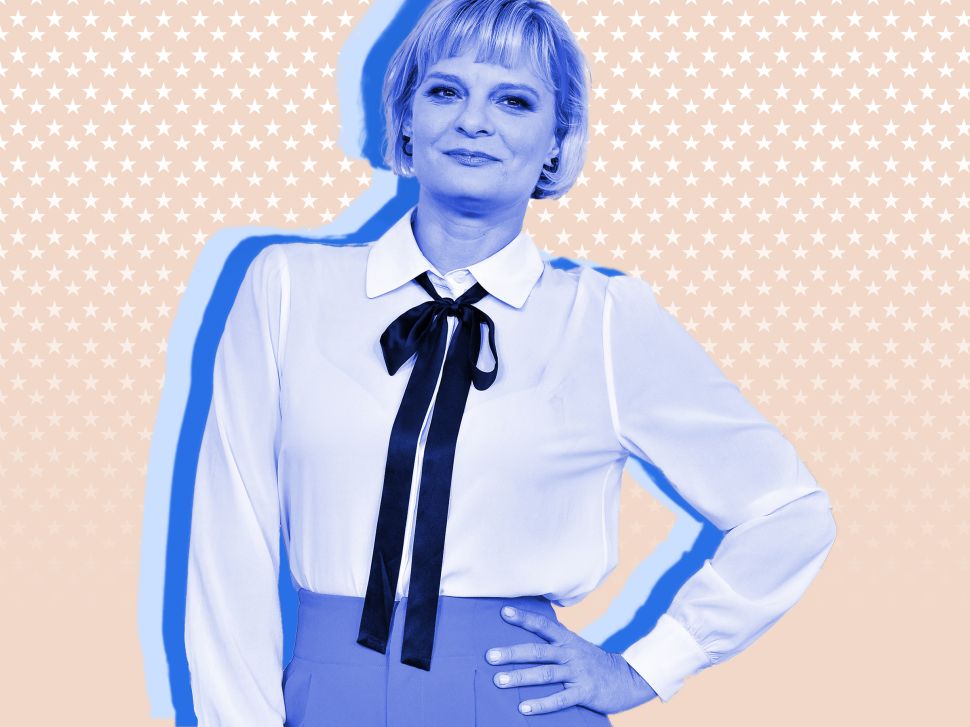