Now in its sixth year, Mexico City’s Material Art Fair has firmly cemented its place on the global art calendar of “must-see” fairs. There are several reasons for this. For starters, it’s one of the few art art-selling events that doesn’t feel like a chore to slog through. Wandering convivial Material, where booths are stacked in a compact jungle-gym of scaffolding, is actually fun. And the fair’s ethos of highlighting emerging artists and younger art spaces guarantees exposure to plenty of new concepts and artistic strategies. It’s really the best fair to see what’s trending on the art world’s hive mind.

It’s always a game to spot a few recurring trends popping up in galleries. Washy paintings that nod to early modernists such as Matisse still rule many booth walls, but I prefer to find the weirder flotsam of the global zeitgeist and put it in context.

This year, vases are everywhere. Wonky vases, silhouettes of vases, broken vases. What’s this about? Perhaps it’s a vessel that symbolizes “art object” or “cultural patrimony” into which artists can pour contemporary concerns or experiment with new processes or materials. Such is the case with George Rouy and Jesse Pollock’s black vases made from steel and charred sour oranges at London’s Hannah Barry Gallery.

Also trending: free-standing, disembodied architectural details. At Mexico City gallery Labor’s booth, French artist Guillaume Leblon has installed Abandoned Window, in which a curtain seems frozen mid-billow, supporting a lonely houseplant. New York’s Fierman gallery is presenting Yeni Mao, whose sculptures are some of many in the fair comprising architectural tile and other building materials divorced from architecture. I ask the artist, who relocated to Mexico City several years ago, if he thinks this trend reflects an interest in the built environment, perhaps contradictory to our generational concerns over displacement or our increasingly nomadic lifestyles. He explains, “It’s definitely a trend in Mexico, and maybe that is part of it. For me, the fragments of architecture are more about a fragmented anthropology…a displaced identity.”

But personally, it was most satisfying to get to the bottom (no pun intended) of one very weird trend I have been noticing since the art fairs in Miami in December: pants everywhere.

For the life of me, I could not figure out why this was “a thing.” Here again, we see it in full force. In Parisian gallery Sultana’s booth, Pia Camil’s sculptures are an explosion of multicolored pants. One floor above, a mobile from Calixto Ramirez sees sand drip from a pair of jeans onto the floor of Italian gallery Ribot’s booth like an hourglass. In Swiss gallery No Conformism’s booth, a gallery attendant held up a pair of white pants silkscreened with images from Inner Light Collective, proclaiming they’re “Giving clothes second life.”

At Material, the trend is positioned in a global discourse that gives a little context to this love affair with all things trouser related. In a fair full of references to prosthetics, shoes and disembodied legs, pants become a sort of ready-made shorthand for absent bodies, without the classical connotations of the torso.

The Barcelona gallery Nogueras Blanchard is showing an array of wooden stilts by Wilfredo Prieto. Vancouver-based Macaulay & Co. Fine Art has a similarly-installed lineup of paper boots from Anishinaabe artist Charlene Vickers, which simultaneously reference indigenous aesthetics and childhood in a somewhat unsettling manner. There are shoe-less casts of feet from sculptor Alix Marie on the floor of London gallery Roman Road’s booth, and foot-less shoes from Magnus Thierfelder stalking the floor of San Francisco gallery Et. Al.’s booth. At Jan Kaps of Cologne, what appear to be tiny polio braces by Berenice Olmedo creepily prowl the installation. And local gallery Neri Barranco is showing crutch/prosthetic sculptures from Daniel Aguilar, who created the series after breaking his ankle.

It’s a testament to Material’s strength as a site of playful discourse that we can now take the pants trend seriously as part of a larger discussion on the body and all its weird horrors. Material is a lot of fun, but it’s also smart as hell.

The fair has developed an impressively on-brand identity that director-cofounder Brett Schultz attributes to close collaborations between its architects, graphic designers, participants, and curators. That brand is playful, adaptable, international and defined more by an openness to experimentation than any one aesthetic—as the pants proliferation at this year’s event makes clear. Who knows what it will be next year, but the delight is its unpredictability. 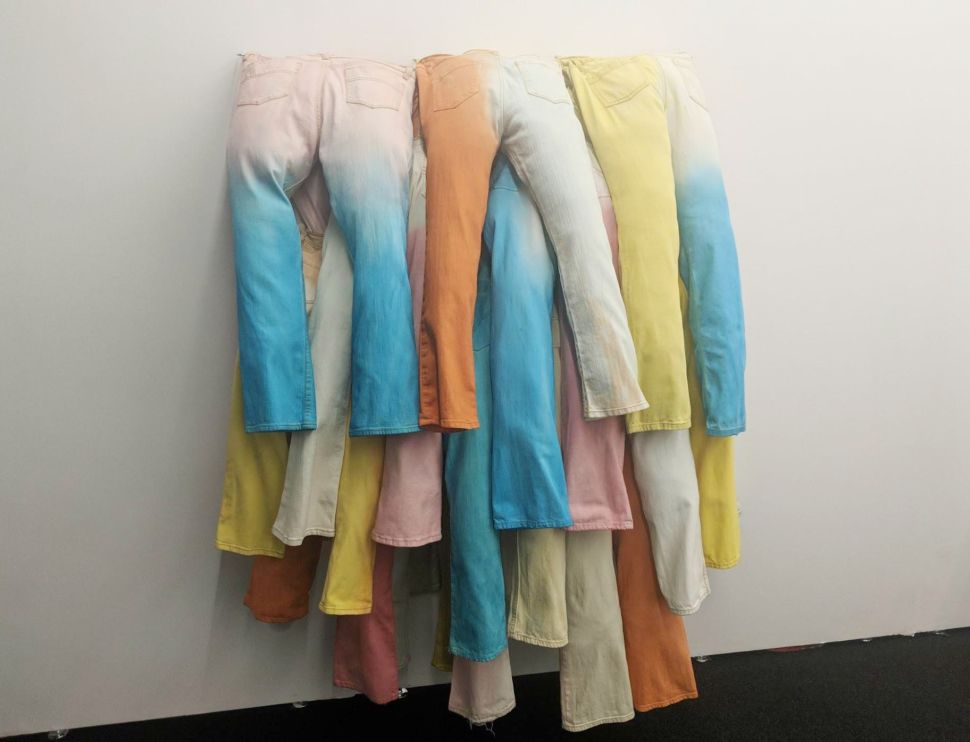