Art lovers should pack their bikinis and speedos, because the city of Miami Beach is about to become (even more of) a major arts destination. The grounds around the convention center on this island paradise off Miami’s coast will soon be home to seven installations that, at a total cost of $7 million, constitute the largest single percent-for-art purchase in U.S. history.

Percent-for-art refers to a type of government initiative wherein a certain portion of new development costs must be allocated to art. In this case, that is being facilitated by the city’s Art in Public Places (AiPP) program. Founded in 1984, AiPP reserves 1.5 percent of all capital costs from both public and joint private-public projects for commissioning and purchasing art.

When the convention center was slated for a $615 million renovation and expansion, the AiPP jumped at the opportunity to commission multiple works to unify the property. That process represents a major departure from the norm.

“So often, public art is [doled] out piecemeal,”  Brandi Reddick, cultural affairs manager with the City of Miami Beach, told Observer. “Public art is rarely purchased with the goal of relating it to a collective or larger goal or theme. We had the unusual honor of purchasing this artwork all through the same committee and with each piece united by the same vision.”

Reddick, alongside Dennis Leyva, the Public Art Administrator for Miami Beach, led AiPP’s search for artists. Their international call for proposals, which concluded in January 2015, returned 524 applications. Leyva, Reddick and the AiPP board whittled that list down to eighty, then eighteen, and then the final seven whose work will trickle onto the convention center grounds through the end of 2019.

The new art also needed to speak to the existing art. Leyva and Reddick were careful to place the projects near existing permanent installations––by such luminaries as Roy Lichtenstein, Dan Graham and Tobias Rehberger––so that the result was cohesive rather than disjointed.

“All of the artists,” said Leyva, “embraced the location where their work was going to be sited and how it referenced the surrounding area. We didn’t want them to feel like standalone pieces that were unrelated to each other.”

“The best project for each particular site was selected,” said Reddick.

Two of the projects, a soundscape by Bill Fontana and a beach-centric mural by Franz Ackermann, have already had their public reveals. April will see the unveiling of pieces by Ellen Harvey, Joseph Kosuth, Joep van Lieshout and Sarah Morris. The final installation will be a warped sculptural take on South Florida’s pool culture by art team Elmgreen & Dragset.

Brooklyn-based artist Ellen Harvey’s work, titled Atlantis, will place viewers in conversation with the immense and delicate South Florida ecosystem. Made up of a 10-foot by 100-foot mouth-blown glass mirror, it reflects the viewer’s visage against an engraving of a satellite view of Florida, the Gulf of Mexico, the Everglades and the Atlantic.

Harvey’s intention is to connect viewers to Miami Beach as an intersection of the urban landscape of Greater Miami and the wilds of the Everglades National Park that abut the city. “Atlantis literally connects the area around the convention center to the larger Florida ecosystem. I spent over a year just painting the life-size design for this project because I really wanted to convey the very human limitations of our ability to comprehend our environment,” Harvey told Observer, noting how much support she felt in completing the task. “The enthusiasm and ambition that everyone brought to bear on this project was really impressive.”

As the contemporary art market becomes increasingly dominated by sales to hyper-wealthy individuals, the public has a vested interest in their municipalities finding ways to present quality new art to the masses. AiPP’s unique opportunity to commission at this vast scale could prove to be a model for future endeavors. 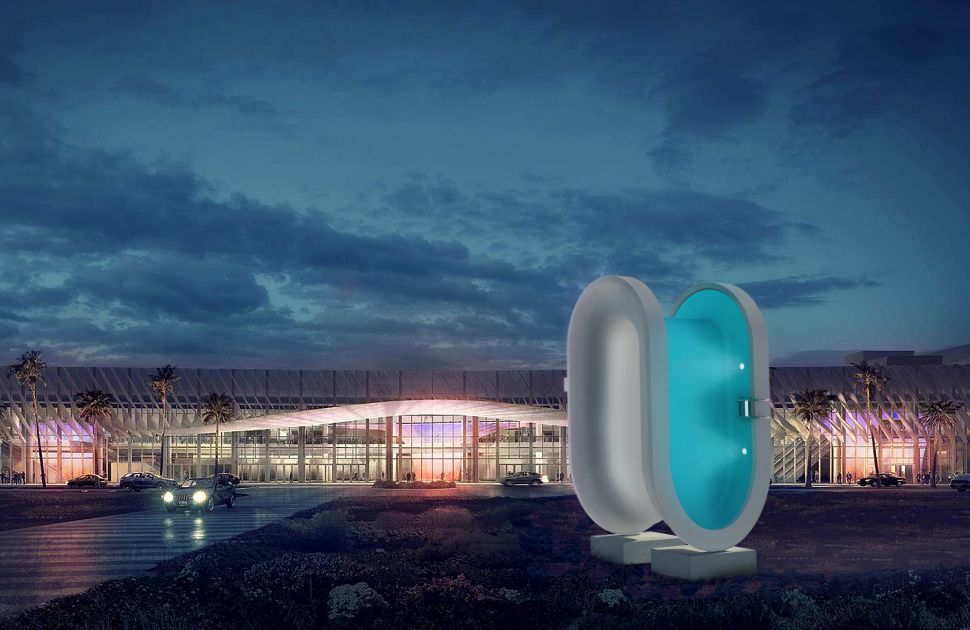