The Game of Life might have made you think our years on this planet would be sunnier: you’re handed $10,000 from the get-go, you start off with a marriage or college diploma, and you’re gifted a car to cruise in through colorfully-tiled checkpoints.

Indeed, life is not so chipper. A recent update to the famous Milton Bradley game, which hadn’t, until this point, changed all that much since its inception in 1860, puts such reality into jarring perspective. The new Quarter Life Crisis edition, a swim-til-you-sink aria of existential doubt and compounding debt, is (hilariously, brutally) endless: the signature vans drive round and round to pick up spouses to divorce, children to pay for, and new jobs to gamble with—all while paying (overpriced) rent and climbing out of debt to secure $500,000 in the bank for a victory. Mercy comes in the form of side gigs where players get an extra $20,000 for their freelance work each time a certain number is spun.

To test out the new game, four journalists sat down to drink wine and spin life’s wheel. (The fact that the job market for our very profession is in a jeopardy hellscape added a special kick to our travails.) Let’s meet the players and see how well the game reflects, per its new edition, “millennial life.”

Diep Tran
Given Job: Assistant to the Assistant Manager, $40,000/year
Given Housing: Tree House, Rent: $20,000/year
Side Gig: Podcast Host (Art imitates life, and so do board games—Diep indeed hosts a podcast!)
Quote: “There’s a lot of room in this van—are thruples allowed?” (They’re not.)

And we’re off to the loop-the-loop races! To see how well this Quarter-Life Crisis version mimics contemporary life, we’ll establish some markers to check in with our players and provide commentary on the game’s verisimilitude (or lack thereof).

Like with the original Game of Life, colored pegs go in the driver seat to designate each player. And also like the original version, only blue and pink pegs are offered in this updated edition.

Diep: Shakes her head no
Billy: “It’s not cute.”
Diep: “Does your player’s gender matter?”
Billy: “No but if they wanted to get fancy the gender would dictate your salary.”
Alex: “Too real.”

In keeping with millennial culture, jobs change on a dime. Each time you land on the “Job” space, you are given a new occupation. While Alex dumped the waiter gig and upgraded to Social Media Influencer, the luck-of-the-draws weren’t always a career advancement.

Because your salary increases when you pick up a spouse—at least in this board game—the race to get married was quicker than a doomed Tinder date.
Naveen, who chose a pink peg: “I’m so excited to marry a lesbian.”
Billy, spinning a one: “Inching toward my future hubby. I need the fast track to marriage.”
Diep: “Always marry someone with more money. I’m losing so much money being single. But I need children.”
Billy: “I don’t and at this rate I’ll be the Bobby of the group.”

Like with jobs, your home can switch as well when players land on a “Housing” space. Diep had the most exciting move that quickly took a turn for the worse.
Diep: “I’m splurging: I got a houseboat!”
The very next turn, Diep was handed an unfortunate Action Card, which players draw each time they land on a space that’s not rent, pay day, or a milestone like Job or Housing.
Diep: “It says, ‘Move out: you’re starting to suspect a little old lady next door is a serial killer…’”
Billy: “She’s on the dingy and she’s dangerous!”
Diep: “‘…Return your house card to the deck, shuffle, and draw a new one.’”
Naveen: “We didn’t even get to come over.”
Diep then got stuck in an expensive Tiny House.

Other Ways We Lost Money

1. Car Crashes: Lose $10,000 each time another player’s van lands on your space to pay for the damage.

2. Action Cards: These basically make players pay for all the things insurance (real and emotional) would cover.

3. Betrayal: Some Action Cards come with a dare, meaning if you execute said dare you can make another player pay the amount on the card.

Naveen, riding high on his Pro Gamer salary, often found himself paying for other people’s cursed Action Cards.
Naveen: “I’m already sensing class aggression at the table.”
Alex: “You’re the Howard Schultz of the group.”
Naveen: “It’s gauche to discuss money with friends and now I’m getting screwed.”
Diep: “Life comes at you fast man.”
Naveen: “I mean you can’t cheat The Game of Life, she cheats you.”

After an hour-long game of financial and emotional ups and downs, Naveen—who had the highest salary, and most quips per capita—banked $500,000 first. While the instability of housing and the milieu of underpaying jobs felt modernized from the original game, the presence of only two genders was dated and certain financial punishments were hyperbolic (the price for two car crashes, $20,000, was somehow equal to a year of childcare). But in true millennial fashion, no one even had children, so we’ll just have to deal with the car fees. 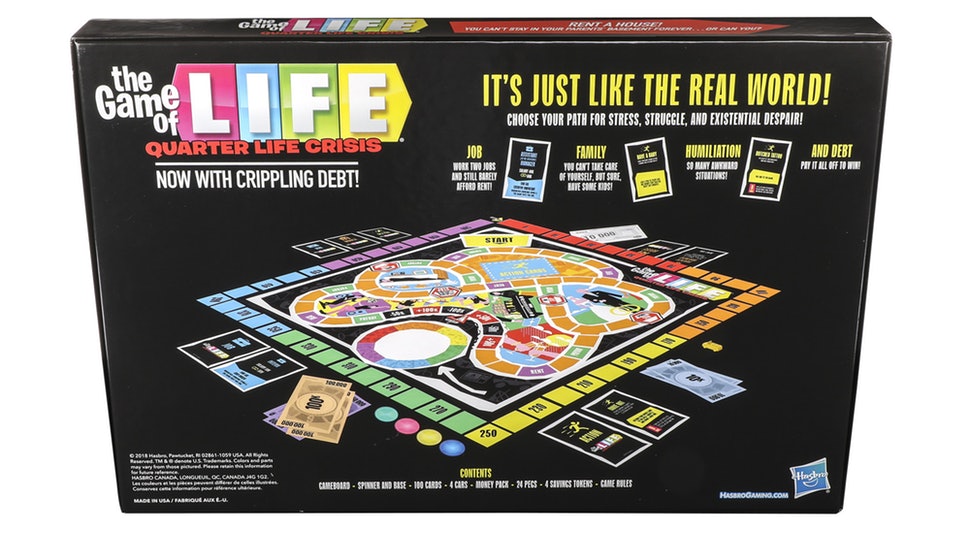