Each year, hoards of courageous revelers flock to New Orleans to celebrate the purple, gold and green explosion that is Mardi Gras. (Long live open container laws!) The party falls on March 5 this year, and whether you’re an MG debutante or a seasoned attendee, you need a home base—you know, a place to unwind when you’re not elbowing your way through raucous Bourbon Street (which, yes, is hard work, but well worth it to catch all those fantastic costumes and floats).

Below, our top five picks for the finest, most festive NOLA hotels, all of which promise big luxury in the Big Easy.

Conveniently located near the French Quarter and the Garden District, Le Pavillon is a historic hotel that dates back to 1907. With rates starting at $161 a night, it consists of 226 accommodations, including special suites like the Napoleon St., Bourbon St., Frenchmen St. and Dauphine St., each of which is decorated uniquely. The Napoleon St. is filled with antiques and stained glass, and features a 19th-century carved fireplace mantel and an antique carved bathtub that was a gift from Napoleon to a Louisiana plantation owner. Guests can grab a drink at the new lobby bar Cachette 1907, chill at the rooftop pool and savor a Couchon de Lait po’boy at its restaurant, Bijoux. 833 Poydras St., Lepavillon.com.

The luxe Windsor Court is part of Preferred Hotels, with a classic and elegant atmosphere that’s more formal old-world than many of the other hotels in NOLA. It has 316 rooms and suites, which are decked out in upholstered headboards and patterned curtains (they start at $595 during Mardi Gras). There are five dining options, a spa, a fitness center, a pool, and an impressive art collection of mostly British pieces from between the 17th and late 20th centuries, with a major emphasis on Windsor Castle. This place is known for its afternoon tea, but it hosts a special Mardi Gras Tea that includes King Cake and themed cocktails like the King’s Cup and Carnival Berry Sip. If you’re lucky, the hotel’s pet French Bulldog, Bristol, will show up (in a tutu, no less). 300 Gravier St., Windsorcourthotel.com.

The historic Jung Hotel has been a part of New Orleans since 1908, but after opening and closing its doors various times since, it made its major comeback in 2018 after a three-year, $140 million renovation. Its 207 modern guest rooms (which start at $159 in March) boast leather headboards, wood accents, marble floors, and a light blue, buttery yellow, beige and white color palette. The stay is within walking distance of the French Quarter and has a big lobby bar, fitness center, restaurant, coffee house and rooftop pool deck. The lobby pays tribute to the city, with works by local artists and original chandeliers at the mezzanine bar. Those who book the Krewe of Orpheus’ Orpheuscapade package ($350 for three nights) receive tickets to the black-tie ball on March 4, which will feature massive floats and live performances from Harry Connick Jr. and Prince’s former backing band New Power Generation. 1500 Canal St., Junghotel.com.

The 125-year-old Roosevelt reopened in 2009 after a $145 million renovation under Waldorf Astoria, with original details like coffered ceilings and mosaic tiles. The downtown NOLA hotel is right by the French Quarter and the Canal shops, but still feels like enough of a getaway from the chaos of Bourbon Street. Its 504 rooms and suites (which start at $183 a night) are mostly traditional, with wood headboards, accent furniture and patterned carpets. Guests can dine at any of the three restaurants and check out the Sazerac Bar, the Blue Room and the rooftop pool. And if you really need to escape the Mardi Gras madness, you can hit up the 12,000-square-foot spa. Past visitors include Frank Sinatra, Judy Garland, Marilyn Monroe and Audrey Hepburn. 130 Roosevelt Way, Therooseveltneworleans.com.

If you’re looking to be close to the action, consider the Royal Sonesta, which is smack-dab in the middle of the French Quarter. The 483-room hotel features traditional gabled windows, flower-accented linens and wrought iron balconies, some of which overlook Bourbon Street. It has three dining establishments as well as two bars and a coffee house that prepares special Carnival pastries like King Cake and its signature Queen Cake. It’s a bit pricier during Mardi Gras season, with rates starting at $429, but the AAA Four Diamond–rated property is also home to the Jazz Playhouse, a great spot to check out live music. 300 Bourbon St., Royalsonestaneworleans.com. 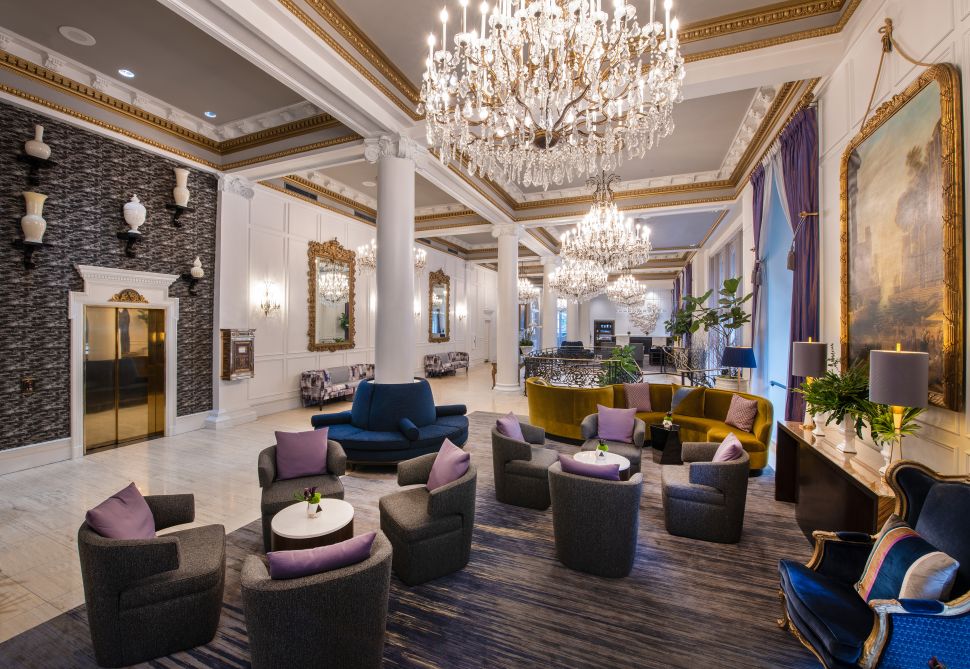