With battle lines drawn, the competition is divided into two fierce opponents. On one side, a successful, well-oiled machine still enjoying the most impressive display of sustained excellence of the past two decades. On the other, a tortured underdog accustomed to heartbreak and failure en route to a previously unimaginable high.

A bit overblown and borderline Shakespearean, yes, but that’s how a sports fan with an overactive imagination could describe last year’s Super Bowl: Tom Brady and the New England Patriots, winners of five Super Bowls since 2001, versus the Carson Wentz–less Philadelphia Eagles, who claimed their first-ever Lombardi Trophy last season. The clashing teams represented the NFL’s golden incumbent and the face of its future.

But you could apply that same description to the ongoing brawl between streaming and traditional television. In this metaphor—just go with it—the upstart streaming industry is the Eagles, happily running trick plays and scoring touchdowns against the old guard of television, the Pats. But while New England finds themselves in the Super Bowl again this year, linear television executives may be facing a terrifying reality of prolonged misery (kind of like a bunch of long-suffering Washington fans).

Traditional TV recently suffered its worst subscriber loss in history, as more than 1 million paying customers opted to cut the cord. With the competition at its most cutthroat, industry players and viewers are curious if streaming services could make a serious play for one of prime time’s last vestiges of hope: the NFL broadcast rights. The majority of the league’s current deals expire at the end of the 2022 season, and talks between interested parties are expected to commence within the next 12 months.

Much like Kevin Hart’s credibility, television audiences have been shrinking at an alarming rate. The year 2017 was the first time that the number of viewers who say they watch their favorite show online was larger than the number who watch it on a pay TV, according to Hub, which has been tracking how consumers discover and watch new TV programming for the past five years. Last year, the shift toward online viewing spiked again, with 56 percent of viewers saying they watch shows online and 44 percent saying they watch on a pay TV set-top box.

As over-the-top (OTT) viewing continues to sack linear TV (yep, still running with the football analogies), the NFL remains a big win for broadcast networks. Following a two-year ratings skid, this season’s NFL viewership rebounded by five percent from last year. In 2018, Sunday Night Football was the second-most-watched TV program by average viewership, attracting an audience of 19.6 million. Five of the top 10 most-watched individual telecasts of 2018 were NFL-related.

In theory, now is the perfect time for one or more of the moneyed streaming services to deal a knockout blow to television.

“It would be like watching the brutal fight of a former champion before he falls to a bloodied canvas,” Eric Schiffer, chairman of leading brand consultancy firm Reputation Management Consultants, told Observer. Scratch what we said before—now that is Shakespearean.

“On Wall Street, the fallout [of broadcast losing NFL rights] would be harsh,” added Steve Birenberg, the founder of Northlake Capital Management, in what may be the most polite understatement so far this year.

However, while OTT services are flush with resources and aggressively headhunting the competition Gregg Williams–style, does a complete partnership between the streaming industry and the NFL make sense for both sides right now? Digital streaming of NFL games rose 86 percent in 2018, per Yahoo Sports, but Amazon’s simulcasts still averaged just 500,000 viewers, according to Ad Age.

“I think one of the streamers may make a bid,” Birenberg said, “but I think it’s too soon given 1) the rebound in ratings this year; 2) the owners will be happy with the broadcasters and the reach they supply; 3) there are still reliability issues with streams, though they’re lessening rapidly; and 4) the time delay on streaming is an issue for betting and even enjoyment.”

Schiffer compares the NFL making a complete shift to streaming right now to it “committing fan suicide.” (Yikes. And we thought Mark Davis’ haircut was as bad as it gets.)

So will the NFL likely stay put then?

“I think a combo bid makes sense, with a shared broadcast and streaming outcome,” Birenberg said. “Broadcasters maintain a crucial live event where most people will still watch for a few years, while streamers could piggyback on the production costs and value, and learn for a long-term future where maybe they control linear and digital rights.”

Football fans currently enjoy a version of that setup thanks to simulcasts, but increased digital coverage isn’t out of the question moving forward.

Per Adweek, NBC shells out more than $1 billion annually for the prime-time Sunday Night Football rights, and CBS pays a similar premium for Sunday afternoon games. Last year Fox snapped up the NFL’s Thursday Night Football rights (which it simulcasts with Amazon) for a whopping $3 billion over the next five seasons to compliment its Sunday afternoon lineup, which already sets it back upwards of $1 billion per year.

Meanwhile, the Disney-owned ESPN, which has been bleeding subscribers over the past half decade, has long been seen as a candidate to relinquish its $2 billion-per-year Monday Night Football rights given its minuscule return on investment—just $285 million in ad revenue. Should gambling be legalized, the total cost of the NFL broadcast rights are estimated to jump 18 percent to more than $9 billion; that’s roughly double Dallas Cowboys owner Jerry Jones’ entire net worth.

Given the tremendously high costs, one can see why a major network might consider relinquishing its NFL’s squatting rights. Conversely, the exuberant price tag may look far more palatable on the profit-loss sheets of the deep-pocketed streamers—Apple has a market cap approaching $1 trillion, after all—who don’t need to worry about ratings. Without a merger with Viacom (which appears to be in the cards), CBS is at a disadvantage because it’s heavily investing in its streaming service, CBS All-Access. After selling its entertainment division to Disney, New Fox has scaled down considerably, though its entire business model will revolve around news and sports, so it’ll probably fight to the death to keep football (cue Al Pacino’s Any Given Sunday speech). ESPN and ABC are backed by Disney, and NBC has Comcast—two powerful and well-resourced safety nets for these high-wire negotiations.

“I do not know how the bidding will work, but I suspect that the incumbents have an exclusive window of some sort on their current packages,” Birenberg said. “Sunday afternoons seem like they will belong to broadcast due to the local nature of the viewing. Thursday, Sunday, and Monday nights seem more likely where the swapping action would be.”

Rome wasn’t built in a day, Keeping Up With the Kardashians is still somehow on the air and the Cleveland Browns needed a grueling 20 years to give its fan base any semblance of hope. These things take time. Though streaming may not yet be equipped to handle the NFL’s TV rights exclusively, and the league may not yet be willing to relinquish the comforts of broadcast’s reach, we can’t deny that the future of small-screen entertainment as a whole is heading online.

Once it comes time to negotiate, will streaming finally defeat a historically entrenched foe like the Philadelphia Eagles did in Super Bowl LII? While it may look doubtful this time around, we’ve reached a point where, at the very least, the prospect isn’t a hopeless Hail Mary. 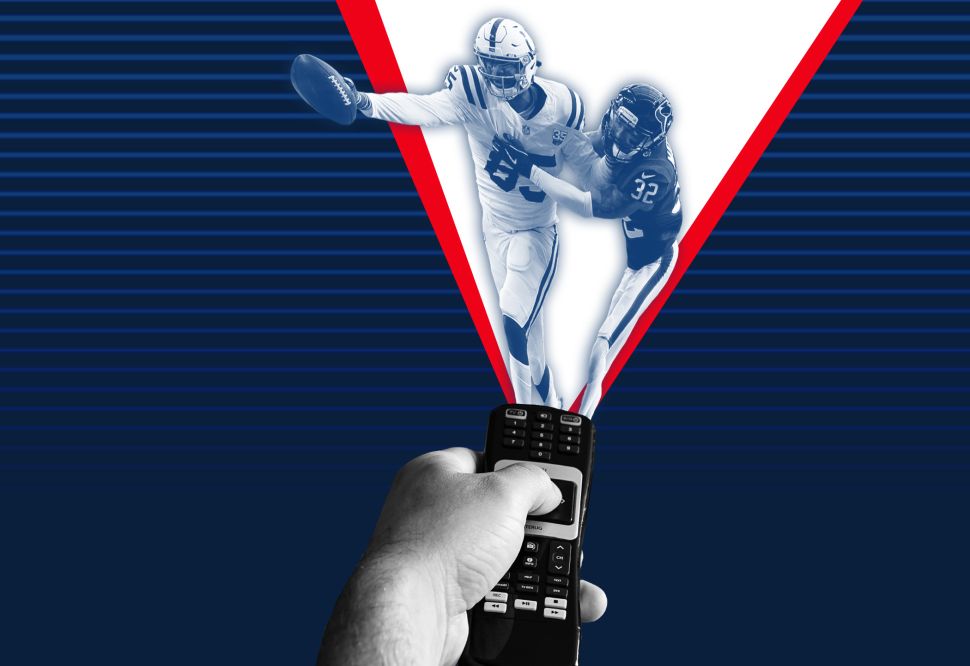