For office workers across Manhattan, winter brings a familiar problem: so much need to clear your head outside the office for a few minutes, so little space in which to take that respite. It’s too cold outside most days for the usual walk to ward off afternoon agita, and the luxury of holing up in the warmth of a Pret comes at a price…the price of a coffee. But there are actually scores of free public indoor spaces for you to roam scattered across Manhattan, Brooklyn and Queens.

Called privately owned public spaces, or POPS, they are located within and outside private buildings throughout the city, and provide a place for anyone to sit down and take a break, get out of the rain or snow, use a restroom, inspect a potted plant or just while away some time. But if you, like many, were unaware that you have a perfect right to enter and lounge in these buildings, perhaps it’s because they’ve been long suffering from an issue of publicity. Namely, they have almost none.

To fix that, the New York City Department of City Planning has partnered with the  Municipal Art Society to sponsor a POPS logo competition, open to any and all, with submissions due by March 15. A seven-person panel and a public vote will determine the top three finalists, each of whom will receive up to $2,000 and be honored at a public event. Of those three, New York City Department of City Planning Director Marisa Lago will make the final selection, with the winner receiving an additional $2,000 to create a design that will be prominently displayed at the more than 550 indoor and outdoor spaces.

“There’s no target number, but we’re hoping for thousands of submissions,” said Elizabeth Goldstein, president of the Municipal Art Society. “These are badly needed open spaces in dense business districts. People need a place to take a breath, to cool their brains, for office workers to sit and eat their lunch.”

These public spaces on private property are amenities offered by the building owners to the general public, which they created in exchange for some zoning variance awarded at the time the building was being erected or expanded: If we let you build the building five stories higher than the zoning laws permit, for instance, you must create a space the public can use. That site then will be designated a POPS.

The concept of real estate developers paying for community amenities is not new. More often, builders may be required to pay into a fund to improve the street in front of a development project or to create a park or bus stop. In effect, it is city planning on the cheap. In 2013, the city of Santa Monica issued a report on why developers should pay into a parks and recreation development impact fund. That report noted that “[t]he establishment of a new set of parks and recreational capital facilities fees has become prudent in light of: (1) the limited revenues being generated by existing parks funding sources, [and] (2) the loss of other sources of potential capital improvement funding (e.g., redevelopment),” among other factors.

New York City has approximately 3.8 million square feet of privately owned public spaces in 329 different buildings. A 2017 audit by New York City Comptroller Scott Stringer of 333 POPS found that 182 of them were not fully compliant with the law—obstructing or restricting entry by the public in some way. One fine of $10,000 was levied against Trump Tower, which had removed a black marble bench and not provided other agreed-upon amenities.

Who is responsible for identifying noncompliance by building owners is not fully clear. Goldstein said that the city’s Department of Buildings is in change of insuring compliance with the regulations, but she noted that Buildings Department inspectors have higher priorities than determining whether or not public amenities are being provided. The City Planning Department and the Municipal Art Society also are not expected to keep tabs on this. In large measure, she said, it is up to the public to make sure that building owners are keeping up their end of the bargain, reporting problems themselves to the Department of Buildings.

“These are outdoor plazas, covered pedestrian arcades and indoor ground floor spaces that are open and usable by the public, required by a 1961 New York City zoning law,” said Jerold S. Kayden, professor of urban planning and design at the Harvard University Graduate School of Design and founder of Advocates for Privately Owned Public Space, which teamed with the Municipal Art Society to bring more attention to these amenities.

The New York City Council passed a law in 2017 to require all POPS sites to have signs that reveal themselves as usable by the public, and the new logos will be integral to these signs. “Will a logo really help?” Kayden asked. “I hope so, because it identifies an area as a privately owned public space, letting the public know that it has a right to be there.” 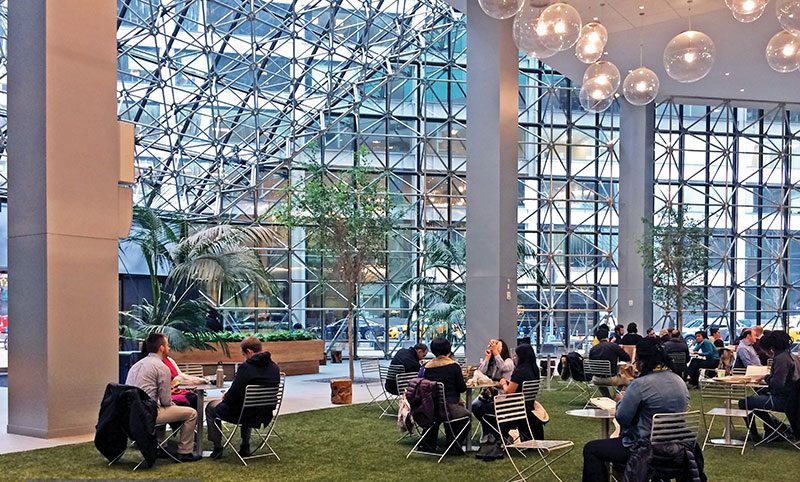