Fashion Month is already in full swing, but its grand finale awaits. The trend-hunting masses are preparing to touch down for Paris Fashion Week, which kicks off February 25, and they will no doubt make a beeline for the chicest hotels in the city. Those who still haven’t found the perfect pad to collapse in after all those runway shows needn’t worry—we’ve got you covered. Below, the five most stylish stays for the most stylish week of the year.

The Dorchester Collection hotel opened in 1913 and is easily recognizable for the signature red geraniums (1,900 in total!) on its facade. The interiors have a sand, beige and platinum color scheme with red accents, fancy moldings, plush velvet fabrics, glittering chandeliers and views of the Eiffel Tower. Guests can choose from its five restaurants and luxe bar.

Plaza Athénée is composed of 154 rooms and 54 suites starting at nearly $1,000 a night. The biggest is the four-bedroom, 4,850-square-foot, Marie-José Pommereau–designed Royal Suite, which start at $25,100 a night. But you can’t go wrong with the 1,400-square-foot, one-bedroom Haute Couture Suite, inspired by Parisian high fashion (it starts at around $13,500). Inside you’ll find a baby grand piano, pink and gray upholstered silk furniture and silver leaf detailing. If you have time in between shows, you can decompress at the hotel’s Dior Institut Spa, which opened in 2008 as a partnership with Christian Dior. 25 Avenue Montaigne, Dorchestercollection.com.

Part of Leading Hotels of the World, The Bristol is located in a very French 18th-century building. It first opened its doors in 1925, and each of its 120 rooms and suites is decorated uniquely, though all of them hark back to the era of Louis XV and contain opulent Louis XVI furniture—silk tapestries, velvet curtains, taffeta quilts. Home to four restaurants (two of which have Michelin stars) and Spa Le Bristol by La Prairie, it was the first five-star hotel in France to be awarded a “Palace” distinction by the Ministry of Tourism.

But The Bristol’s best feature is hands-down its Burmese cat, Fa-Raon, whom you’ll find lounging about in a Goyard collar and custom engraved Christofle tag—that is, when he’s not in his own private chambers. 112 Rue du Faubourg Saint-Honoré, Lebristolparis.com.

The Buddha-Bar Hotel Paris is a nouveau kid on the block. The Preferred Hotels hot spot opened in 2013 in an 18th-century mansion in the eighth arrondissement on Faubourg Saint-Honoré, flaunting a classic French-meets-East Asian aesthetic. Red lanterns and dragons, plushly upholstered armchairs and gilded mirrors adorn its 56 rooms and 19 suites, which start at $400 a night. Guests can dine in either of its two restaurants and unwind at the wellness center. 4 Rue d’Anjou, Buddhabarhotelparis.com.

The glamorous 18th-century hotel on the Place de la Concorde reopened after a four-year renovation in July 2017 as part of the Rosewood Hotel group. Crillon has welcomed guests like Madonna, Sophia Loren, Taylor Swift and Celine Dion and offers 78 rooms (starting at $1,100 a night in the low season), 36 suites and 10 signature suites. Les Grands Appartements mega-suite was designed by none other than Karl Lagerfeld, while the Marie Antoinette Suite—with its gold leaf accents, Versailles marble, pearls and crystals—is the real pièce de résistance. Inspired by the French queen, who would take piano lessons there, it starts at more than $18,000 a night.

The hotel has four dining options, including the Michelin-starred L’Ecrin, plus Sense, A Rosewood Spa, which is complete with a custom swimming pool inlaid with 17,600 very low-key gold scales. 10 Place de la Concorde, Rosewoodhotels.com.

The Ritz Paris, which finally reopened after a multimillion-dollar four-year renovation in 2016, is one of the most well-known hotels in the city. Now part of Leading Hotels of the World, its contains 142 rooms and suites, which start at $1,130 a night around Fashion Week. Many of the suites are named after famous former guests like F. Scott Fitzgerald, the Duke and Duchess of Windsor, and, of course, Coco Chanel. The designer called the Ritz home for more than three decades, and her eponymous suite is decked out with gilded mirrors and her personal sketches and portraits (it starts at $20,380 a night). Chanel’s influence is also evident in the Chanel au Ritz spa, with offers Chanel skin care treatments and products.

Guests can savor sensible, Fashion Week–appropriate meals in any of the hotel’s three restaurants and nurse cocktails in any of its three bars, including the famous Bar Hemingway. 15 Place Vendôme, Ritzparis.com. 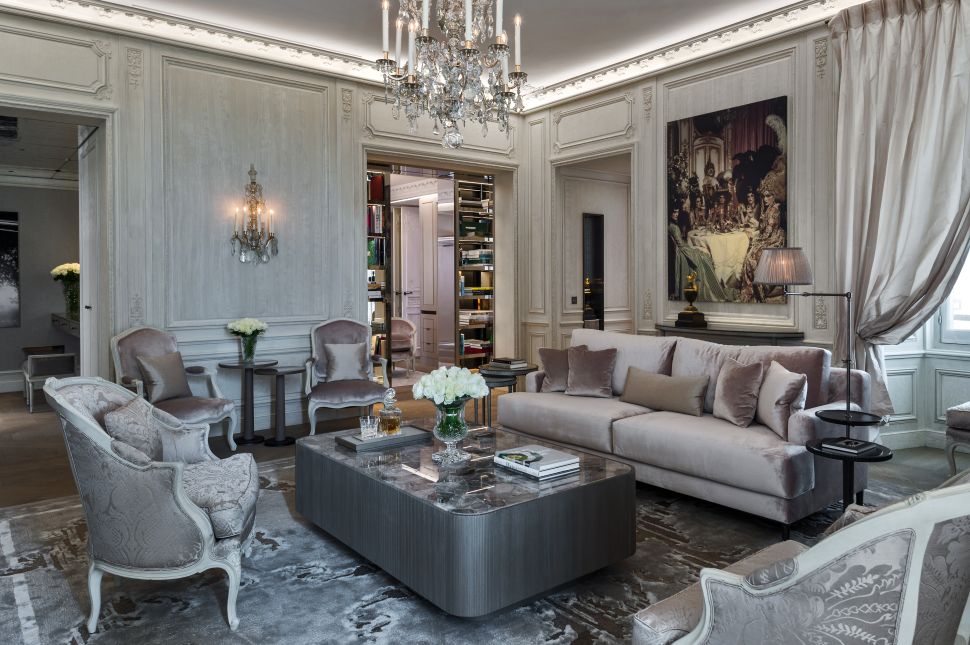