When you have a disease, or someone dear to you has a disease, and you go to the theater a lot, you begin to think, fucking playwrights. Suddenly, every play is about getting cancer, or fighting cancer, or recalling such-and-such who perished from the big C. And if your dear someone dies, and you keep going to the theater, you still think, fucking playwrights. Because now there’s a whole bunch of grief plays for you to enjoy. Playwrights are vampires. When Conor McPherson wrote his superb monologue St. Nicholas, it wasn’t about a theater critic falling in among UV-averse bloodsuckers; it was a straight-up self-portrait.

It’s not just dramatists; all writers ransack misery for art. I don’t know what exactly inspired Simon Stephens and Nick Payne to write the monologues that make up Sea Wall/A Life, a quietly shattering diptych at the Public Theater. Both concern fathers, children, death and guilt in the aftermath, and both are exquisitely played by Tom Sturridge and Jake Gyllenhaal. Maybe the writers are transcribing from life, or their friends’ lives. Maybe they simply know that grief is evergreen. Whatever the source, the effect is raw and wrenching.

Should this show come with trigger warnings for the bereaved? I tend to think of such disclaimers as millennial-coddling stuff, emotional blankets for digitally stunted waifs who are victims of life without ever having lived. But anyone can get triggered—even prickly, middle-aged theater critics. Death follows us, our dangerous shadow. Fundamentally, that’s what these two snapshots are telling us: Life is the trigger warning.

Our first victim of fate is Alex (Sturridge, languidly flayed), who tells us about his wife and her father, Arthur, an ex-soldier, now a math teacher, who owns a house in the south of France. Alex is a commercial photographer, joyfully married, and the most conflict he has with Arthur is arguing about the evidence for God. Stephens’s piece, Sea Wall, gets its title from the oceanic topography that the father-in-law shows Alex one day while they’re diving. Our narrator assumed the drop-off would be gradual, but “the darkness of the fall that the wall in the sea reveals is as terrifying as anything I’ve seen.” A handy foreshadowing for a different sort of descent that completely shreds Alex’s family’s life. To say more would be to spoil the gut-churning accident that leaves the speaker a shell of a man.

On the surface, both monologues are about what we make of grief—how we assimilate it into life without going mad—but they’re really about what grief makes of us. How it re-defines our social and inner selves in irreversible ways. Alex talks matter-of-factly about the great, huge hole in his belly, a literal hole that goes through him. At the end of his 35-minute confession, we have no idea if the wound will close up or he’ll bleed to death.

After intermission, the ways in which grief transform a person become more complex and, in some ways, more sinister. Jake Gyllenhaal, in cozy cardigan and deceptively mild-mannered, relates the slow death of his father from heart disease and the birth of his son in a smash-cut double reminiscence (the chronology becomes clear at the end). Payne’s script has a brisk, wry efficiency, peppered with bits of pregnancy comedy. Gyllenhaal’s unnamed narrator has a penchant for making lists: potential boy and girl names, things to buy once baby’s on the way. The larger mystery of the piece, and Sea Wall shares this feature, is the deliberately murky nature of the protagonist’s relationship with his father. Gyllenhaal expresses doubts about having a child, after his father dies—“truth is I’m not a dad. I’m a son,” he says—and that identity crisis becomes chilling detachment about the well-being of his daughter.

Directed with keen sensitivity by Carrie Cracknell on an artfully drab set that includes a broad brick wall, free-standing studio lamps and minimal pieces (table, piano), Sea Wall/A Life is not what you’d call an uplifting experience, contemplating the sour mystery of extinction and the indifference of the universe. “I don’t understand why we prepare so fucking wonderfully and elaborately for birth and yet so appallingly and haphazardly for death,” Gyllenhaal marvels, capturing the evening’s keynote. Trigger warning? That would assume we don’t want to hear tough, human truths. And we should hear them, even if we still grumble, fucking playwrights. 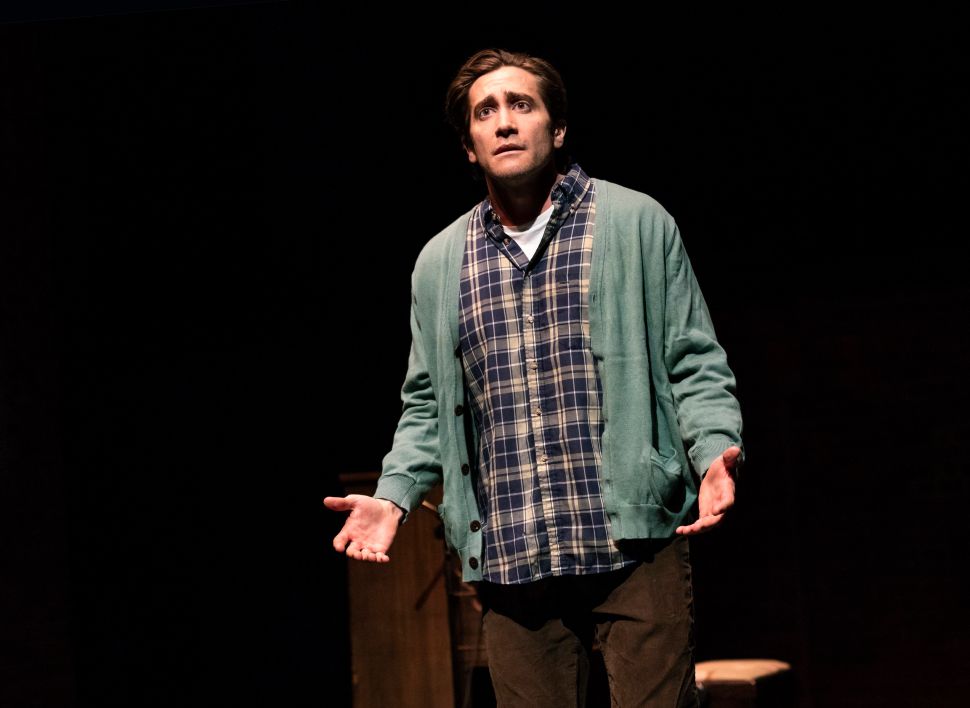