Despite new recruits to the Academy geared toward adding greater diversity and younger voices, the February 24 Oscar broadcast will no doubt shed more light on who’s wearing who than on the current state of the art of movie making. For that, tune in a day earlier on IFC for the Independent Spirit Awards. While there is some crossover with the Academy, Spirit Award nominees tend to tie closely to socio-political issues of the day, honoring a filmmakers regardless of how much money their movies have earned.

Nominees are limited to movies made for under $20 million, (which would eliminate five of eight Best Picture Oscar candidates), and are voted on by Film Independent’s roughly 7,000 members of mostly independent film producers, directors, actors and writers. In the Best Director category, the Spirit Awards nominated three women, Debra Granik, Lynne Ramsay and Tamara Jenkins. The number of women directors nominated for the Oscar this year is zero.

“When I see nominations announced for various shows where it’s five white guys nominated for Best Director, I honestly think it’s insane,” said the president of Film Independent, Josh Welsh. “It’s not hard to find work by filmmakers of color and by women.” In fact, since the beginning of #MeToo and subsequent blustery vows by executives to be more inclusive, women directors of the top 250 grossing films jumped to 11 percent in 2017, up from seven percent the year before. But as feminist fury faded in 2018, that number slumped back to eight percent.

“A bigger problem is you have good men who are all feminists and all about women directing until it means that their job is on the line. And then you see the reality of the situation,” said Ashley Connor, nominated for Best Cinematography for the dramatic thriller, Madeline’s Madeline. The Academy nominated no women for cinematography. “I’m not saying it requires Guillermo del Toro to not take his next job, but it really does take a change in ideology and the understanding that numbers are numbers. So, if they’re not in any way improving, then that’s still a symptom of the patriarchy’s control.”

In 2011, Debra Granik received an Oscar nomination for her film noir, Winter’s Bone, which introduced the world to its likewise nominated star, Jennifer Lawrence. Granik’s latest film, Leave No Trace, based on Peter Rock’s novel, My Abandonment, stars Ben Foster and Thomasin McKenzie as father-daughter survivalists living in a Pacific Northwest forest. It was nominated for three Spirit Awards, including Best Picture and Best Director, as well as the Bonnie Award recognizing mid-career female directors.

Reviews for Leave No Trace are unanimous. The New York Times said it, “encourages us to see the beauty—and meaning—in the everyday.”  Rotten Tomatoes scored it at 100 percent, slightly higher than the 61 percent enjoyed by Oscar nominee and Golden Globe winner Bohemian Rhapsody. In fact, Leave No Trace scored better with critics than any Oscar nominees and received no nominations from the Academy.

Also nominated is Lynne Ramsay, a Cannes and BAFTA-winning veteran of 20 years who has never been nominated for the Oscar. Her thriller, You Were Never Really Here, about a hitman played by Joaquin Phoenix, garnered Spirit Award nominations for Best Feature, Director, Editing and Actor, and earned $2.5 million at the box office.

“The Oscars have so much to do with capitalism,” observed Connor. “It’s very rare that a film that doesn’t make money or doesn’t have a large backing behind it is considered for any awards. And this is what makes the Independent Spirit Awards special.”

Sorry to Bother You, Boots Riley’s breakout surrealist comedy, was embraced at festivals and by critics, earning $17 million on a $3.2 million budget in over 800 theaters. Nominated for a Best First Feature Spirit Award, it, too, was ignored by the Academy. It made money, but maybe not enough. Or it could have been the fact that it raises hot-button issues dealing with race, class and the media.

“You do see those sorts of stories throughout independent film, films that have political content,” said Welsh. “You’re grappling with social issues, exploring people from very different backgrounds, that’s a huge strength of independent film. And they’re really is an audience for that work. But there’s so much media consolidation going on. And all the consolidation is lining up behind the tentpole franchises, more escapist fare. What’s frustrating is we are swimming in a sea of garbage and we need people who are going to shine a light on the great work that’s being made.”

In the current climate, streamers like Netflix and Amazon might be life rafts in that sea of garbage. They are the only deep-pocketed organizations willing to finance filmmakers mostly on their own creative terms. Tamara Jenkins is nominated for Best Director and Best Screenplay Spirit Awards for her hilarious but poignant fertility comedy, Private Life, which also garnered a Best Supporting Actress nod for Kayli Carter. Jenkins’ movie, which received 93 percent on Rotten Tomatoes, higher than half the Oscar picks for Best Film, was released on Netflix.

“If a company like that will get behind a film like Roma, or Dee Rees’ Mudbound last year, films that are fiercely independent and artistically uncompromising, and get a major corporation behind that…” said Welsh, trailing off, leaving the unquantifiable to imagination.

When he talks about diversity, Welsh speaks not only of inclusion for women and people of color, but reaching out to filmmakers from all over the world. Since its founding in 1981, Film Independent’s membership has swollen to roughly 7,000 on seven continents, including Antarctica. Plans are underway to develop programs for filmmakers in India, Pakistan, Bangladesh, Nepal, Sri Lanka and North Africa, among other regions, including the Middle East.

“I am grateful there are these smaller production entities and people who are trying to keep film culture alive through diversity. Otherwise we end up with a very limited subject until the only kind of film that can be made and enjoyed in the United States is these big sterile gargantuan things that look like The Triumph of the Will, something in the franchise world,”

concluded. “Organizations like Film Independent are really pushing for democratization of the film business by having these programs. It’s so important that it’s called the Spirit Awards because it bolsters the spirit of independent filmmakers.” 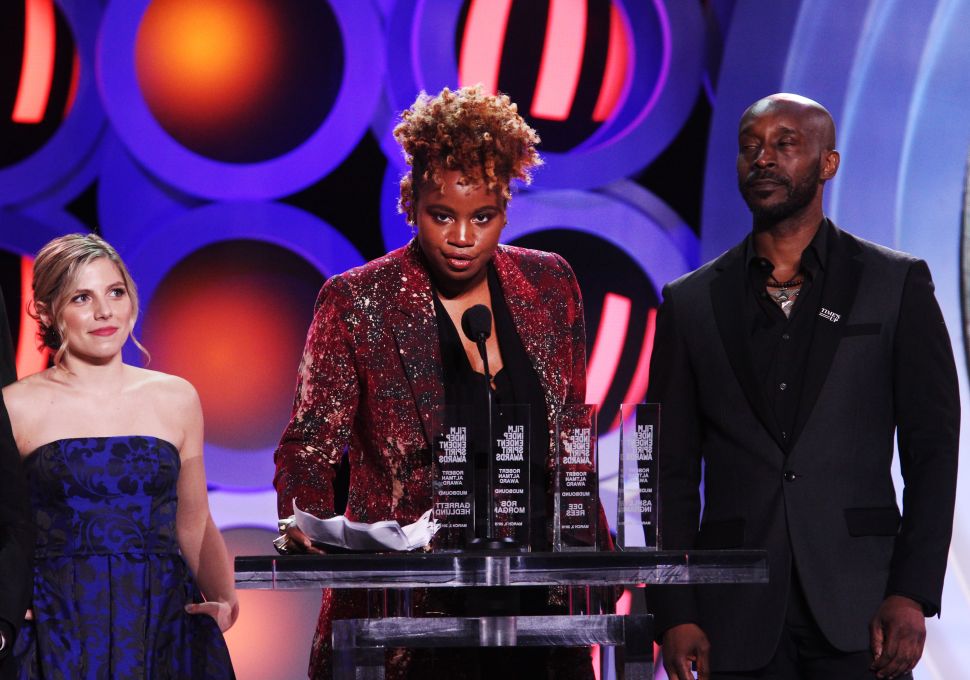