Chris Hemsworth and Elsa Pataky were just in Montana for Liam Hemsworth and Miley Cyrus’ family-inclusive honeymoon ski trip, but to warm up afterwards they jetted off on another fancy getaway. The couple, who primarily reside in Byron Bay in Australia, recently hunkered down in Thailand for a private excursion with their three children.

Actually, the Thor actor has been in the area shooting his upcoming film Dhaka, but his wife and kids joined him to head to Soneva Kiri, a resort composed of 34 villas on Thailand’s fourth largest yet least populated island, Koh Kood.

The luxe stay, which can be reached via a 90-minute flight on Soneva’s private plane, is tucked away in a rainforest. Here’s everything you need to know about the secluded spot, from its secret waterfalls to its lofty treetop dinners.

Those who favor atmosphere shouldn’t miss the resort’s Treepod dining experience. Guests climb into a bamboo pod, which is then hoisted up into the trees of an ancient rainforest, where their food and drinks are delivered via a zip line from their own personal waiter.

…And watch a classic under the stars.

The overwater outdoor cinema, Cinema Paradiso, is suspended above the lagoon and features a new movie—everything from blockbusters to classics—every night. Guests recline in lounge chairs in the covered, cushiony porch-like auditorium, where they can nosh on gourmet snacks and, more important, sip on cocktails.

The smallest villa is still a very roomy 4,337 square feet.

Even if it’s “only” one bedroom, the tiniest of Soneva Kiri’s luxe accommodations is still palatial. It also comes with a rather regal price tag of up to $5,690 a night in the high season ($1,828 in the low season). The cozy villa has its own private pool, day beds, direct beach access and an outdoor bathroom and shower.

But it’s hard to beat the massive, six-bedroom clifftop haven with its own treehouse.

The biggest villa is a 31,516-square-foot mansion hidden atop a cliff in the jungle. There’s a massive swimming pool with a waterslide, a sunken dining area, indoor and outdoor showers in four of the bedrooms, a spa, a steam room and a game room. In addition to the very chic -facing master suite, guests can clamber up into an actual treehouse with its very own deck, bathroom and dressing area—it’s meant for the kids but seems more than adequate for grown-ups. It’ll cost you $21,570 a night during the peak holiday season, though there’s a chance you can get it for a true steal of $5,238 a night in the low season.

Chasing secret waterfalls is a must…

A $370 two-hour experience led by a tropical ecologist includes a trek to a secret waterfall. The five-level cataract looks pretty mind-blowing, if Hemsworth and Pataky’s Instagram shot is any indication.

…As is spending the day at a sacred temple.

The full-day adventure takes you to visit a Cambodian Khmer temple, the UNESCO world heritage site Angkor Wat. It also includes a speedboat ride over to Ban Hat Lek, where you’ll board a private helicopter and fly over the Central Cardamom Mountains National Park. The whole thing will set you back $18,170.

Chocoholics will find their true paradise at the resort’s dedicated sweets shop, filled with locally made cocoa treats (blends of up to 95 percent!) like cookies, truffles, bonbons and mousses. An endless supply of dessert sounds crazy and dangerous, but at least you’ll get your money’s worth. 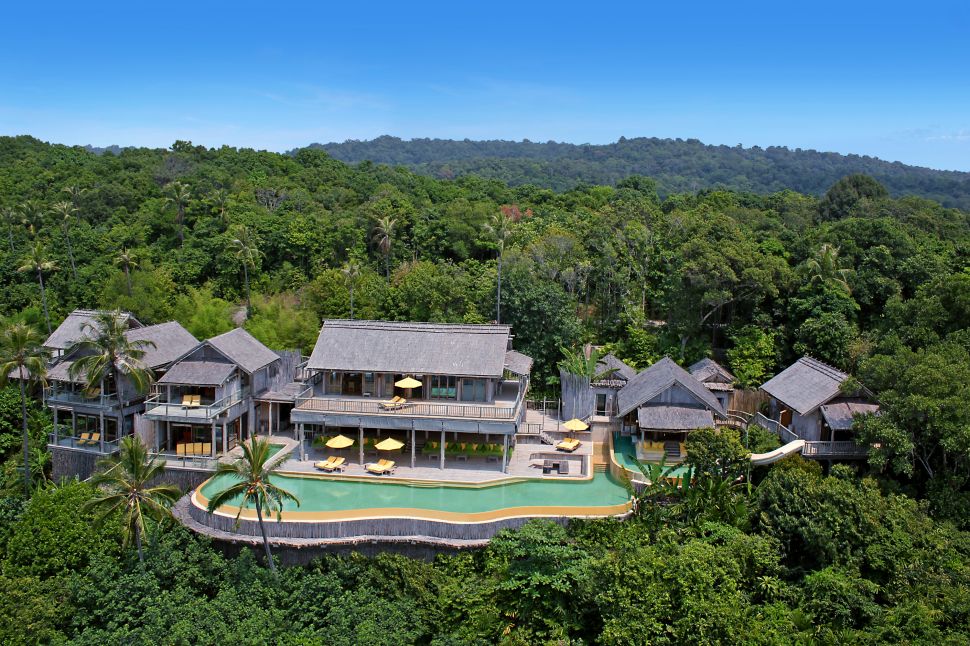