Super Bowl LIII is just around the corner, which means you’re probably thinking about which of your friends has a TV in their apartment, so you can invite yourself over to scream at the screen whenever the New England Patriots score.

But, fellow New Yorkers, consider this alternative: Rather than avoiding the mass of Patriots devotees who’ll no doubt be cramming themselves into every boozy establishment in the city, why not face the hordes head-on? Instead of cowering at home like a nerd, why not instead head to Professor Thom’s on 2nd Avenue between 13th and 14th streets, the designated headquarters for obsessive Boston sports fans based in New York? While you’re watching the game, heckling Pats fans (but no fighting, please) and secretly praying for Tom Brady to sprain his ankle, you can order the most fantastic nachos Manhattan has to offer and simultaneously indulge in one of the great American pastimes: rage eating!

“Eating your feelings” is a hackneyed phrase—so overused that it’s reduced scarfing cookie dough to cope with a breakup to a mildly amusing footnote on the emotional-consumption spectrum. Sad eating is supposed to be funny, something to be mocked, but what about eating when you’re so pissed off you feel like you might explode? What about staring down your worst enemy while simultaneously inserting a delicious, bite-size morsel into your masticating jaws? Now that sounds like a power move.

And oh, what rapturous bite-size morsels you’ll find at Professor Thom’s. The nachos there could convince a Knicks fan that trading Kristaps Porzingis to the Mavericks was a swell idea. They could convince a Brady-hater that maybe Tom doesn’t really seem like that bad a guy.

First of all, these things are absolutely massive. I recently shared a two-person nacho order with a friend, and at the end of the evening we split the leftovers in half and carted them home: I had modest dinners for the rest of the week. The sauce is thoughtfully provided on the side, and the melted cheese, crackling chips, fresh guacamole, salsa and green peppers (meat is optional) all mesh together in a glorious cacophony of flavor. Most of all, the Professor Thom’s nachos are good enough to thaw any frosty, sports-induced bad mood.

When Boston sports teams are having a good year, the atmosphere in New York City seems to tense up and chill, like an austere blancmange filled with rapidly souring milk. The Celtics and the Red Sox are always points of contention, but this year things suck because the goddamn Patriots are in the Super Bowl. There’s perhaps nothing in the world more infuriating than a protracted winning streak, especially if the object of your vitriol happens to be the entity that simply can’t stop racking up wins.

So yes, the New England Patriots are barreling toward their next championship having more than earned the hatred they inspire. And yes, it’s more than a little bit likely that they’ll take home a big win yet again. It’s rough, but it’s the truth. You can’t do anything about it, so you might as well accept that fact and succumb to the simple pleasures delivered by a plate of nachos the size of a hubcap. Go forth, embittered New Yorkers, and eat your feelings. 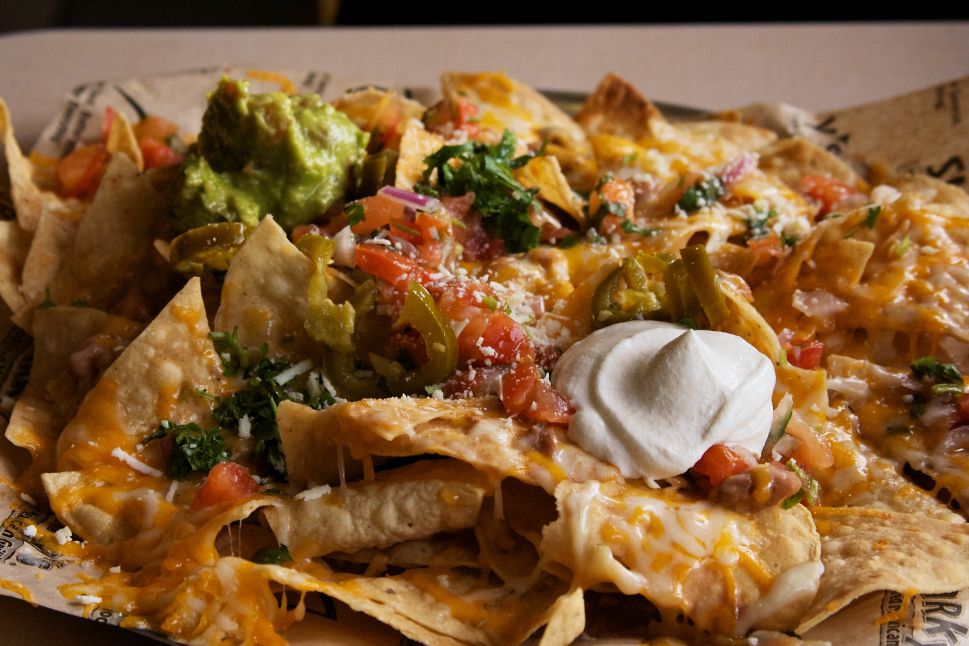