So you think you know J.R.R. Tolkien (1892-1973). You’ve seen the film epics, and you’ve read the books that were the beloved adopted children of America’s psychedelic age. You may also have seen the posters that decorated college dormitory walls. But did you know he was an artist, too? And that many of those original illustrations were by his own hand?

A visit to “Tolkien: Maker of Middle-earth” at the Morgan Library and Museum through May 12 draws on Tolkien’s own archive. The objects in the show form a sort of portrait revealed through the astonishing world he dreamt up and brought to life with more than words.

The exhibition premiered last summer at the Bodleian Library of the University of Oxford, which has the world’s largest holdings of Tolkien documents and drawings. The Bodleian also has a Tolkien archivist, Catherine McIlwaine, who organized the exhibition and is the author of its massive catalogue.

At the Morgan, after entering the upstairs galleries through an oddly-carved portal that evokes the lair of Bilbo Baggins, visitors follow Tolkien’s life and literature on the walls. The experience requires an adjustment for anyone who met Tolkien through moving pictures. “Tolkien: Maker of Middle-earth” is neither Imax nor CinemaScope.

“It’s amazing how small everything in the show is, but it’s beautifully done,” said Morgan curator John McQuillen, standing by a sketch of an English landscape, a study in green that Tolkien made as a teenager.

Tolkien���s first audience for his fantasies, besides himself, was his family. On the wall are Christmas cards from the 1930s, in which Tolkien has illustrated scenes of tiny demons, polar bears and Father Christmas. They look something like a mix between cartoons and illuminated medieval manuscripts. The script appears shaky, Father Christmas explains, because it’s cold at the North Pole. (Normally, Tolkien’s handwriting was unerringly straight, even and small.)

“You start to see little bits of the Hobbit creep in,” said McQuillen. Nearby is the original dust jacket design that Tolkien himself drew for the book’s publication in 1937, a vision of calm symmetry with blue snow-capped mountains rising behind a foregrounded landscape.

In one of Tolkien’s favorite drawings for The Hobbit, called Bilbo Comes to the Huts of the Raft-elves, 1937, a blue lake is framed in vegetation that absorbs light as if it were stained glass. Other scenes from that time glow in orange and dark red, as if the palette came from the American Southwest.

“It’s very modern—he wasn’t afraid to experiment with color and styles. It was clear that he was not stuck in any antiquated illustration mode,” said McQuillen. “It’s a creativity that he cannot even keep control of.”

John Ronald Reuel Tolkien was born in South Africa, and came to England when he was four. From then on, he would be attached to the green rolling hills outside Birmingham, sketching the landscape since childhood, preferring English weather to the hot sunshine of his birthplace. These lush green surroundings would become Middle-earth, the setting of his books.

Tolkien’s banker father died in South Africa soon after the family went to England. His mother converted to Catholicism (much to the displeasure of relatives) before she died when her son was 12, leaving him an orphan. Tolkien would be a devout Catholic for his entire life.

The boy, who had been left without much money in the care of a Catholic priest, was bullied in school before he went off to World War I, where most of his classmates were killed. Photographs from that time show a young man much older than his years. After the war, he studied ancient English and Germanic languages and spent his lifetime teaching philology at Oxford. Among his scholarly publications was a translation with commentary of Beowulf.

Those ancient tales inevitably took their place among the roots of Tolkien’s own stories. “There are styles and patterns, character elements, historical elements. The dwarves in The Hobbit are drawn directly from Nordic myths. Royal lineages in The Lord of the Rings are related to patterns in medieval history,” said McQuillen.

“There’s no one-to-one correlation,” McQuillen stressed, however. “There are large patterns in medieval literature that he worked in, but very few things are lifted out of Beowulf and plunked into The Lord of the Rings.

Tolkien’s Catholicism is also sometimes cited as a source. “He’s writing stories, he’s not writing down his own personal beliefs,” said McQuillen. “There are elements of what you might call Catholic faith that come up in The Lord of the Rings and The Hobbit. But unlike C. S. Lewis’ Narnia cycle, the religious influences are not so overt.”

C.S. Lewis was among the prominent admirers of Tolkien’s work. Other readers ranged from W.H. Auden to Joni Mitchell, who evoked Tolkien in her song, “I Think I Understand.” Mitchell created the Gandalf Publishing Company in the 1960s to release her song lyrics.

Tolkien’s fame was already established by the 1950s, and his books sold well in hard-back for years before they became a paperback industry. Yet his manuscripts for The Hobbit and The Lord of the Rings—the source of individual pages displayed on the wall at the Morgan—were sold to Marquette University in Milwaukee in 1957 for a mere 1,500 pounds. “It was a Catholic University and they were acquiring works by Catholic authors,” explained McQuillen. “Tolkien thought he was getting a great deal.”

Another Christian school that acquired Tolkien’s property—his writing desk, where large portions of his famed books were written—is Wheaton College, in Illinois. The institution purchased the item from a private collector in 1987, after Tolkien’s death, and have it on permanent view.

At this point, there’s clearly a lot of desire to get closer to Tolkien, the man, as well as the world he fashioned. But one aspect of the creator’s legacy left out here is its massive continued presence and depiction in pop culture. While other Morgan literary exhibitions, like the recent “It’s Alive: Frankenstein at 200,” traced the mythology of literary characters—a scientist and the monster that he created—through theater, film, fan magazines and the fabrication of life-like replicas, “Tolkien: Maker of Middle-earth” leaves all that out.

“[This exhibition] focuses on Tolkien himself and his creative process that brought us the famed literary works. We wanted to keep the focus on Tolkien’s original material,” McQuillen explained. “As with our Frankenstein exhibition, the subsequent adaptations and influences of Tolkien could be another exhibition in their own right (and may well be one day in the future).”

Tolkien himself said as much in The Hobbit: “It’s a dangerous business, Frodo, going out your door. You step onto the road, and if you don’t keep your feet, there’s no knowing where you might be swept off to.” 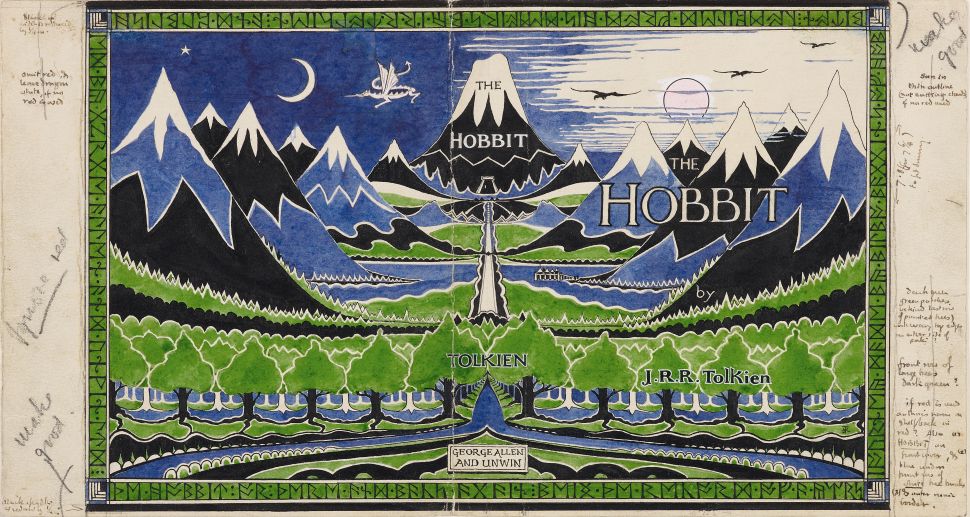