Last fall, about two weeks before size-obsessed Donald Trump and the Republican Party lost control of the House of Representatives in the 2018 midterms, the White House put out a very large 72-page warning, a lengthy “manifesto,” as the wags at CNBC winkingly called it, all about the evils of socialism.

Turns out the slightly more materialist cousin of Karl Marx’s thoughtchild is stalking America. Socialism, the Council of Economic Advisers allowed, is “making a comeback,” what with arguments that maybe Americans should enjoy health care like the rest of the Western world rather than be left to die because their GoFundMe couldn’t quite cover the cost of their dialysis treatment gaining traction even among supposed MAGA diehards. But if actually allowed to enter the halls of government, such ideology is guaranteed to turn the United States into “the next Venezuela” (where all citizens are, at least, guaranteed health care, even if a combination of an extractive economy and economic isolation means they can’t always get it).

It was the kind of vintage red-baiting that Richard Nixon picked up from Joe McCarthy, a broadside that worked back when real-life Archie Bunkers presided over blue-collar dinner tables with all-American fists. And it failed, spectacularly. Though Trump did apply the “next Venezuela” label to losing Democratic efforts in the Texas senate race and in the Florida gubernatorial contest, in the House of Representatives, the Democrats captured 40 seats and Nancy Pelosi became Speaker. And now, more than a few of the Democratic Party’s new stars openly identify as socialist.

Drawing deep from the well of ideas at his disposal, the president’s reaction to this political and ideological setback has been to keep at it, but more. “Tonight, we renew our resolve that America will never be a socialist country,” the president said during his State of the Union address. “America was founded on liberty and independence—not government coercion, domination, and control.” On Monday night, during a combination 2020 campaign stop/greatest hits nostalgia act of the kind you see at a third-rate casino, Trump demonstrated that along with “lock her up” and “no collusion,” his is a political See ‘n Say with a new gear: say “socialism” loudly, and something good will happen.

As has been observed elsewhere, this is absolutely an official Team Trump talking point. Elsewhere on Monday, Donald Trump Jr. offered a sort of anti-labor mashup, declaring that “loser teachers” are trying to “indoctrinate [Americans] on socialism from birth.”

Not since the Cold War have we seen such an obsession from a sitting president with capitalism’s supposed polar opposite. And back then, red-baiting like this was aimed outwardly, at the Soviet Union, not inwardly. Will yelling “socialism” over and over, like it was invoking some kind of capitalist candy man, work on the grandchildren of the very people who Nikita Khrushchev warned about this? Actually, probably not! What Trump is doing is in fact “a huge gift to the left,” according to The Chicago Tribune, free air time and proof positive that Alexandria Ocasio-Cortez and Bernie Sanders are living rent-free (how socialist!) in Trump’s head.

Ask any political theorist, and if they are being honest, they will tell you that voters prefer actual real things to ideology. And they especially want things if things are affordable health care and relief from student debt. Fox News has run multiple items in the past month detailing how popular socialism is when defined in this way. Young voters simply don’t care about the word in the way their parents did—and there are increasing signs that those same parents also don’t really care, as long as it means a return of the semblance of security they once enjoyed.

There are probably only two ways that Trump can possibly hope the socialism scare tactics will work: Redefine the term, on his terms; or actually offer something concrete as an alternative.

Up until now, his go-to bogeyman was Venezuela, where a combination of an extractive economy, economic isolation and abject executive management has led to a refugee exodus of near Syrian crisis proportions and—so it would appear—a coup in which the United States may have taken an active role. In response, anyone can point to the examples of Canada and the United Kingdom, where the “socialist” policies advocated by AOC and her crew have been in place for decades. Many Americans may look to the relative stability in both of those places and ask themselves, “Why can’t we have that?” We can’t, Trump says when he bellows “socialism” like he’s picking up burgers for his football buddies. We can’t, and I have no reason why.

Trump was elected on a raft of promises he had no plan or intent to keep, mostly because he didn’t expect to win. It would have been smart politics to actually invest in that infrastructure project he talked about, or bring meaningful jobs back to the heartland. Those were good ideas! Instead, he kept with the same familiar GOP program that led to this mess. In this time of crisis, he is retrenching and clutching at his old familiars, with one addition: Crooked Hillary, no collusion, socialism! It’s the same act with another song, except this one is giving the other side free advertising. 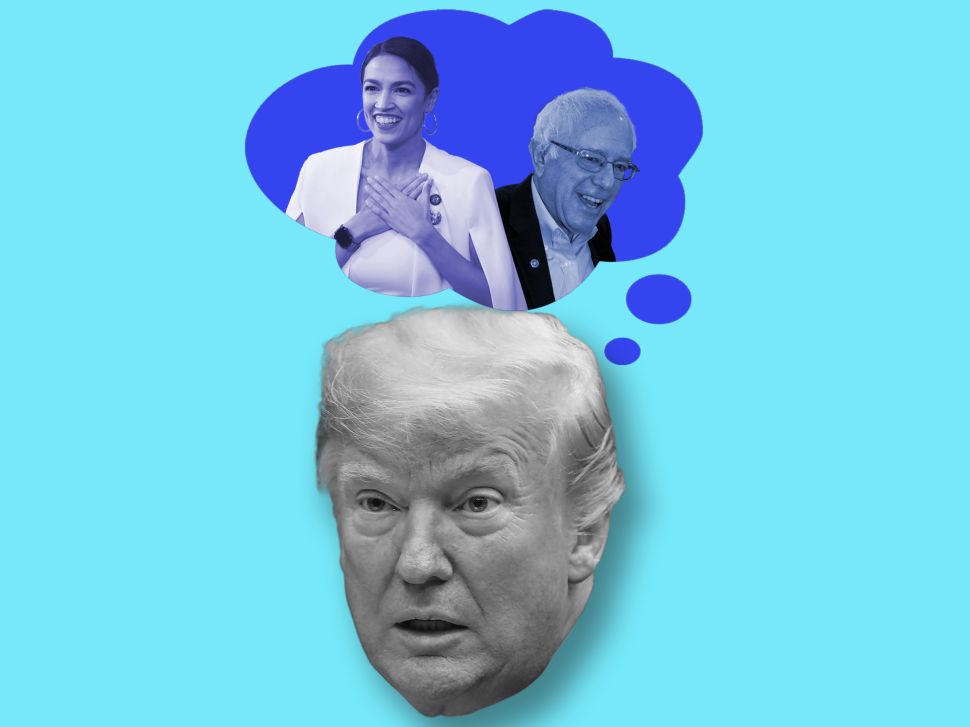