Last year’s summit between President Donald Trump and North Korean Leader Kim Jong-un dominated headlines and became historic for even taking place. But this year’s second meeting, set to occur in Hanoi, Vietnam later this week, presents new challenges for the leaders. Despite signing a joint resolution for the “complete denuclearization of the Korean peninsula,” North Korea’s regime has continued expanding its nuclear capabilities—jeopardizing any progress made during last June’s negotiations. At trial next week is the president’s promises to deliver lasting reform in Asia, as well as the future of the lone regime.

Here is what to keep an eye on during this week’s second summit with North Korea.

A Possible End to the Korean War

During last year’s summit, Trump promised Kim Jong-un an end to the Korean War. This possibility is still on the table, as both U.S. and South Korea envoys have indicated a likely declaration between all parties.

“The possibility is open,” Kim Eui-kyeom, a spokesman for South Korea’s president, Moon Jae-in, told The New York Times on Monday. “We still don’t know exactly what format the end-of-war declaration will take, but there is an ample possibility of North Korea and the United States agreeing to such a declaration.”

Although the Trump administration’s overarching objective going into this week’s summit is a denuclearized North Korea, the president has sent out mixed messaging on the issue. Last Monday, Trump said his team was in “no rush” to have the regime denuclearize, adding that “if there’s testing, that’s another deal.”

North Korea has not conducted a nuclear test since 2017 and has moved to close two of its nuclear sites. Despite these outward measures, the president’s national team has warned that the regime “is unlikely to completely give up its nuclear weapons and production capabilities because its leaders ultimately view nuclear weapons as critical” to its survival.

We also don’t know what the path for denuclearization looks like. Speaking to The Wall Street Journal, a senior administration official described one outcome as obtaining “a freeze on all weapons of mass destruction and missile programs… agreeing on a common definition of denuclearization; and making progress on a road map for future negotiations.”

North Korea Likely to Get a Pass for Human Rights Violations

With denuclearization a top priority for the Hanoi summit, North Korea’s decades-long track record of human rights violations will unlikely take precedent in the negotiations.

“Human rights vocabulary had disappeared long ago after the new government. But it seems even in the U.S., it is kind of disappearing,” one North Korean defector told CNN. “All the world was watching [President Trump], but during the Singapore summit, I never heard him mention human rights.”

Appearing in a pre-recorded video message this weekend at a Mar a Lago, Trump touted the release of U.S. hostages, but did not mention the death of the regime’s former American prisoner Otto Warmbier—who died from injuries shortly before the summit. Many experts have subsequently accused the White House of whitewashing the regime’s brutality.

“There are worrying signs that in its efforts to claim that the talks are making progress, the Trump administration is turning a blind eye to North Korea’s nefarious activities,” wrote Brooking Institute’s Thomas Wright in an op-ed for POLITICO. “When you peel away the rhetoric, the administration’s policy to North Korea comes down to a practical understanding: You stop testing missiles and nuclear bombs and we will pretend everything is fine.” 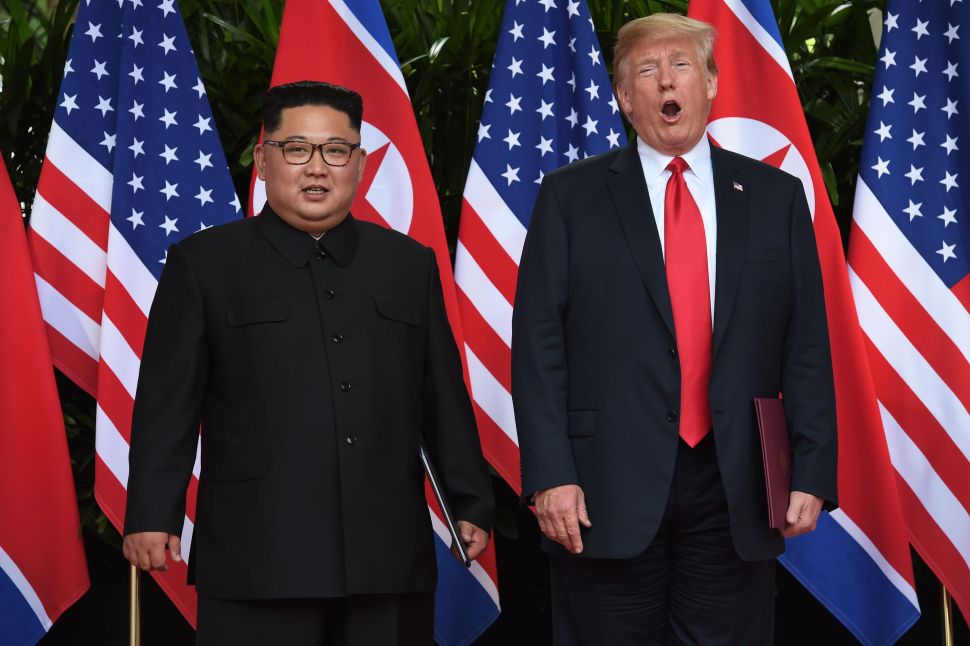