As all of us learned Friday, there’s only one scene in director Dan Gilroy’s near two-hour film that even resembles the genre of horror, and even fewer plot surprises. It’s basically a tensionless Zoolander for the art world, with a Beetlejuice level of gore. Boring for its simplicity, yet surprisingly hard to follow, not a single attendee championed the film. “It’s a shit movie,” said Postmasters co-founder Magda Sawon through laughter. The screening, in her opinion, was pretty much the only way to produce a good viewing experience. “We had the perfect audience. There’s no debate that it lifted the experience—we know this game.”

The basic premise of the movie can be summed up easily. An aspiring gallerist named Josephina (played by Zawe Ashton) finds a trove of creepy paintings by an undiscovered artist named Ventril Dease, (a riff on “ventral disease,” which returns images of penises on Google). Soon, though, we learn that the artist was a serial killer who used painting to work through psychological trauma and that his murderous spirit is brought to life every time a character engages with his art for personal gain.

There are no redeemable characters. The critic, Morf Vandewalt (Jake Gyllenhaal) writes a scathing review of a love interest’s ex-boyfriend to curry favor; rival dealers Rhodora Haze (Rene Russo) and Jon Dondon (Tom Sturridge) fight over the exhibition rights of a street artist who doesn’t want to play the market; an art consultant named Gretchen (Toni Collette) blackmails the museum she used to work for into buying more than they want. The movie’s satire offers some comedic value—Gyllenhaal typing naked at his keyboard might be the most hilariously absurd image in the film—but the film can’t get rid of its characters fast enough. When they die, no one cares.

Except, perhaps, for actual art professionals. “It’s so rare to see the art world portrayed in popular fiction so this is huge for us,” Powhida explained. “It may be [useful] for figuring out what someone else’s perception is from the outside of the art world, what notes it hits and what it misses.”

For the most part, this is what consumed conversations. “Some of the narratives are spot on,” Powhida observed, describing Rene Russo’s character Rhodora Haze as comparable to former gallerist Priska Juschka. In the movie, Haze played in a band called The Velvet Buzzsaws before becoming a dealer. In real life, Juschka spent her twenties as a punk squatter in Berlin before marrying a rich man and opening a gallery in New York. In 2011, she was forced to dissolve the company after being charged with a series of lawsuits alleging fraud.

In addition to Haze’s biographical connection with actual dealers, her behavior aligns with known Chelsea sharks. She gives collectors access to more desirable works by extracting purchases of new talent, and steals artists from emerging galleries by promising more sales. That’s not nice, but she’s not a total jerk. When her artist Pier (John Malkovich) suffers from a year-long creative block, she doesn’t stroke his ego. Instead, she tells him what he needs to hear—that he should extract himself from the art world so he can find his voice.

Haze probably constitutes the most fleshed-out and true-to-life character (the art handler, artist and thief played by Billy Magnussen is a close second), but for all the qualities of the art world this movie nails, its misses are the ones that stick. For example, the first scene depicts a crowd of collectors who can’t get into Art Basel, while critic Morf Vandewalt walks in without any trouble at all. As Carolina Miranda noted over Twitter, “The first piece of comedy is that someone *wouldn’t* be able to get into Art Basel.” The second is that someone thought to cast critics as more powerful than the average art world peon.

There are plenty of reasons these fallacies grate, but perhaps the most tedious is that the second half of the movie consists entirely of art killing its characters off in what appears to be a near random sequence (a departure from traditional horror films, which crucify characters in order of the severity of their sins). Stilted and without narrative interest, there’s not much else to think about but these misses. At Postmasters, attendees fixated on why parking was ubiquitous in places where there is none—just the tip of the iceberg for this movie.

I say this because ultimately, the killings aren’t actually as random as they first appear. A misguided morality sorts their sins—something Powhida identified as akin to selling out. For art to stay pure, critics are supposed to be poor, gallerists should not capitalize on art that isn’t meant to be sold, and dealers must not transform their punk spirit into a commercial art career. The problem, of course, is that there’s no great sin in gaining wealth through art. It’s the cheating, market manipulation, and vanity that distracts from the art, and the worst offenders—collectors and auction houses—are all but absent from this movie. It doesn’t help that the film is set in L.A., which the film inaccurately depicts as an art market town, but there is one small truth revealed via omission. Like life, the rich suffer fewer consequences for their transgressions than the rest of us.

The uneven attention to detail and character development makes the movie feel incomplete, leaving its audience with plenty of questions. Arguably the most obvious—“What audience is this for?”—came up repeatedly after Friday night’s screening. “It seems like this is for the art world, but it’s not that good at being a parody of the art world,” collector Barry Hoggard lamented.

That doesn’t bode well for the movie. If those in the industry need a table full of liquor and twenty other people to get through it, how’s an average person going to connect? It seems reasonable to assume that won’t most bother trying. 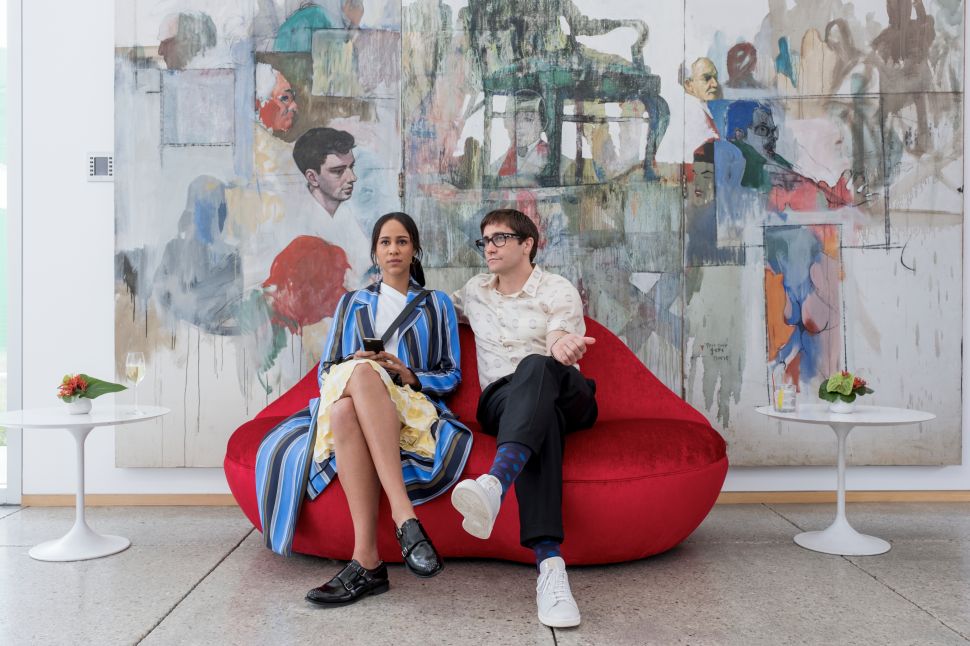