Wolfgang Puck is one of the most renowned celebrity chefs in the world, but if you know his work, you might be surprised to learn that his crew will supply the dishes at this year’s Governors Ball, the Academy of Motion Picture Arts and Sciences’ official post-Oscars fete. That’s because Puck is an absolute wizard with meat, and we generally associate these elite partygoers not with animal flesh, but with plant-based power smoothies and the like.

So what exactly has Puck whipped up to satisfy 1,500 starving, anxiety-ridden vegan celebrities who’ll be clamoring for any morsels they can get their hands on after sitting through the three-plus-hour ceremony on Sunday? Thankfully, we now have the answer given that the charming cuisine connoisseur stopped by The Ellen Show to demonstrate his expert technique for the host and her guest, Annie Hall star and statement hat aficionado Diane Keaton.

First, it’s important to note that Puck is a seasoned pro when it comes to executing this gig: He and his staff have been catering the Oscars Governors Ball for 25 years, so he knows exactly how difficult it is to sate more than 1,000 diet-conscious people at once. Puck has also interpolated countless innovative ideas into the fabric of American cuisine—open-concept kitchens, funky cheeses on pizza—so maybe it isn’t so surprising that he’s been enlisted as the chef who feeds America’s most famous stars on Hollywood’s biggest night.

In the Ellen segment, Puck explained how he shaves a long strip of apple with a modified cutting device, and then uses the strip to wrap up little sprigs of celery, fennel and more apple into something resembling an adorable little sushi roll. Next, he prepared handmade vegan pasta with pepper, garlic, capers and tomato sauce, garnishing it with a bit of chili powder and topping it off with pesto.

He concluded the segment by showing the pair his process for creating miniature chocolate Oscar statues. “We make 3,500 of the small ones, and they’re all stuffed with strawberry marmalade,” Puck said.

Puck also couldn’t resist flirting relentlessly with Keaton, who hovered around the cutting board, fabulously clutching a glass of iced red wine.

“With ice?” the chef exclaimed before taking a sip and wincing horribly. “Maybe in the summer it’s OK.” 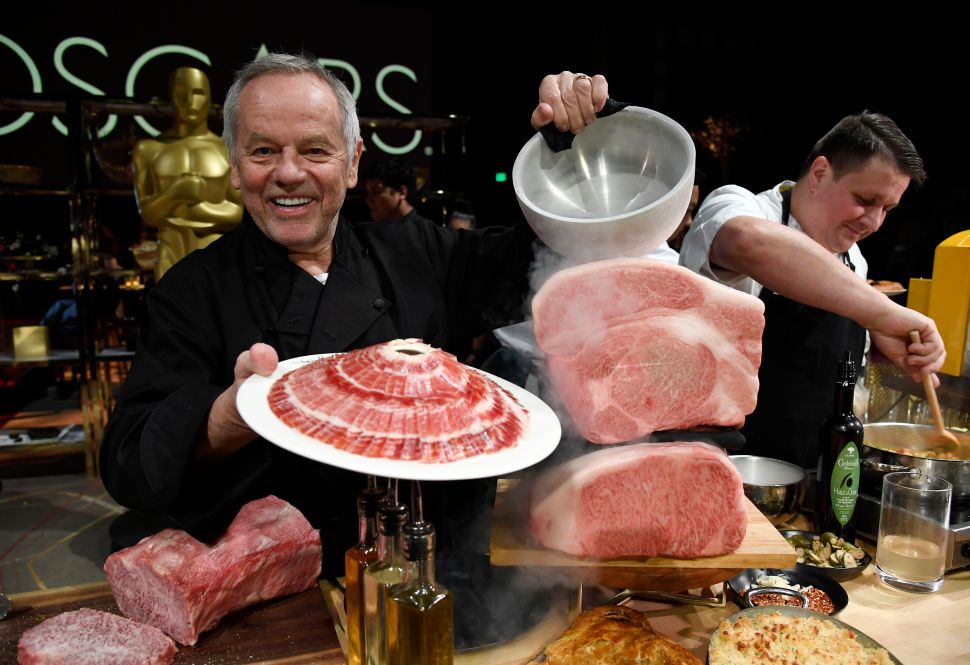