Maroon 5 played the Super Bowl Halftime Show on Sunday night, and in accordance with the generally flat rhythms of the game itself, the best that could be said of the perfunctory 14-minute stroll through the band’s hits was that it was fine.

Travis Scott and Big Boi made boisterous guest appearances, frontman Adam Levine took his shirt off and generously writhed around the stage, and a prerequisite meme reference was thrown in for the kids: Scott’s “Sicko Mode” was preceded by Spongebob Squarepants footage, which was voted for last year by fans of the Nickelodeon show in the wake of creator Stephen Hillenburg’s death. The one true standout moment was a surprising, confounding distraction that punched through the monotony like a douchey airhorn: Adam Levine’s terrible tattoo collection.

Some posit that the Super Bowl gig is an impossible challenge for musicians, who are only ever setting themselves up for failure and ridicule by agreeing to perform for impatient, only-half-paying-attention football fans and Twitter snobs.

But first of all, tell that to Prince, whose Halftime Show was nothing short of brilliant. Second of all, the only truly insurmountable obstacle facing Super Bowl performers is the optics threat. Those omnipresent high-definition cameras are going to broadcast all the slipups (like a wardrobe malfunction) and less-than-ideal facial expressions (like these “unflattering” ones) to millions of viewers.

And Adam Levine’s optics are…not great. He’s handsome and in incredible shape, but you’d never be able to tell because his ink is just so intense: It distracts the eye entirely. It’s actually hard to pick the worst tattoo of the bunch.

Adam Levine is tattooed like he's the main character in Memento but the mystery is where he left his Juul. pic.twitter.com/FxBAxOPnsG

Why is it okay to see Adam Levine’a boobs and not Janet Jackson’s?

Asking for a friend.

Perhaps it’s the word CALIFORNIA etched across his belly in businesslike font, or maybe it’s the inexplicably winged mermaid that covers nearly his entire back. Or it could be the corny, classically designed tiger and MOM tattoos running down his arm. My vote, though, is for the sanskrit symbol. There’s nothing more dull than getting innumerable tattoos for no other reason than to prove you’re interesting.

Structurally speaking, the Super Bowl Halftime Show has always been a fascinating display of what the National Football League and its affiliates in network broadcasting think is quality entertainment for viewers of all ages. In this case, since so many artists—including Rihanna and Cardi B—turned down the job this year to stand in solidarity with blacklisted star quarterback Colin Kaepernick, it appears that Maroon 5 would just have to do.

The band indeed delivered the standard phantasmagoria of pop fare that football’s big night requires, but all the canned synth sounds in the world couldn’t drown out the silent scream emanating from Levine’s flesh as it cried out for someone to please rectify this unfortunate situation. 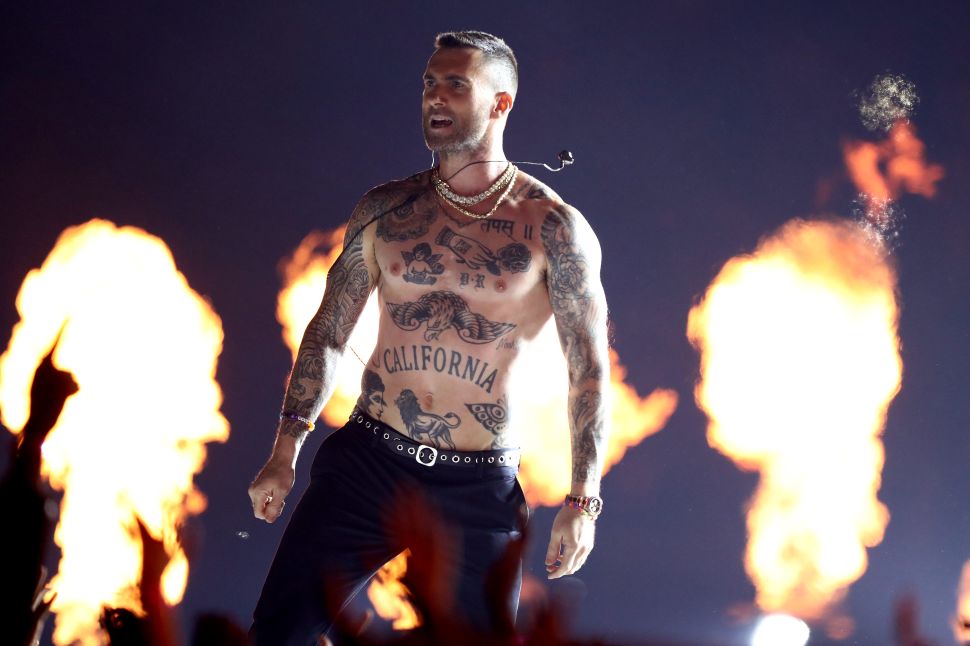