Every February, Mexico City draws a crowd of art industry insiders and other lovers of culture (and warm weather) to Latin America’s preeminent duo of fairs, Zona Maco and Material Art Fair. Now in its 16th edition, Zona Maco, the first fair to make the city its home, will take place from February 6 to 10, with over 70 galleries from across the globe showcasing work. Material follows suit, opening a day later on February 7. In a metropolis that’s been gaining serious momentum for its rich cultural heritage and local art scene, Observer has rounded up seven exhibitions occurring during Mexico City’s art week that you won’t want to miss.

This exhibition marks the first major exhibition of New York artist Nancy Spero in Mexico. Curated by Julie Ault, the show is arranged according to the evolution of Spero’s work across subject matter and medium—as a first-generation feminist, Spero created figurative paintings, works on paper and installations that engaged with distinct female tropes, including goddess mythologies as well as women as victims. In a time when female artists received little recognition, Spero used her art as a means to fight for equality, and as a way to respond to the larger social issues of the day, including the Vietnam War.

Commemorating 50 years since the events of 1968, including the Tlatelolco massacre in which students gathered in peaceful protest were brutally attacked by the Mexican government, this group exhibition reflects on the past while examining where Mexico stands today. Accordingly, the show brings together artifacts and other tools used by social movements, challenging the very definition of art, while shedding a light on the complex realities in Mexico, where violence is still omnipresent.

Presented in collaboration with Fundación Televisa, this exhibition examines the role television plays in visual culture and art history. With this, the show highlights various artistic channels through which a group of international creatives have engaged with television including video, painting, performance and installation work. From advertisements to broadcast news, it considers the ways in which television can be employed as an object, a medium and a subject matter—and the ways in which television echoes and disseminates messages that reflect contemporary culture.

Proyectos Monclova will present a solo exhibition of work by Helen Escobedo, a multimedia artist from Mexico City who was mostly known for her sculpture work. Showcasing 75 pieces of art made between the 1960s and ’80s, the show includes sculptures, collages, drawings and paintings that are all distinct but inextricably linked. Beyond this, the work highlights Escobedo’s interest in how art can be integrated into daily life—in this way, her art practice, which often employed a critical or subversive tone, explores the relationships between public space and design as well as art and architecture.

In this exhibition, Galeria O.M.R. will showcase the work of french artist Yann Gerstberger, who creates tapestries made from household items and anthropomorphic sculptural figures. Employing imagery and sources taken from Surrealism, Nigerian folk art, graffiti and the Internet, Gerstberger’s tapestries border on representational and abstract. In this way, they bring the imaginary into the material world using hand-dyed mop yarns, which imitate the ways in which digital images can appear blurred and pixelated. Additionally, the show includes a site-specific mural made from chalk that acts as a backdrop for the tactile works.

Bringing together 22 works by Mexico City-based artist Bosco Sodi, this exhibition will include works on canvas and clay sculptures that were inspired by Sodi’s period of mourning and reflection following the death of his grandmother. Thus, the body of work explores the duality that is  intrinsic to human life including the relationships between light and darkness, joy and sadness, youth and old age, and positive and negative. The contemplative and textural pieces were created in his studios in Oaxaca, Mexico and New York.

Artist Cynthia Gutiérrez uses her work to bridge the past and the present as well as the serious and the humorous. Born in Guadalajara, Mexico, this dichotomy can be seen in the ways she employs pedestals and textiles as vehicles of deeper meaning, touching on themes surrounding history, collective memory and the temporality of humankind. 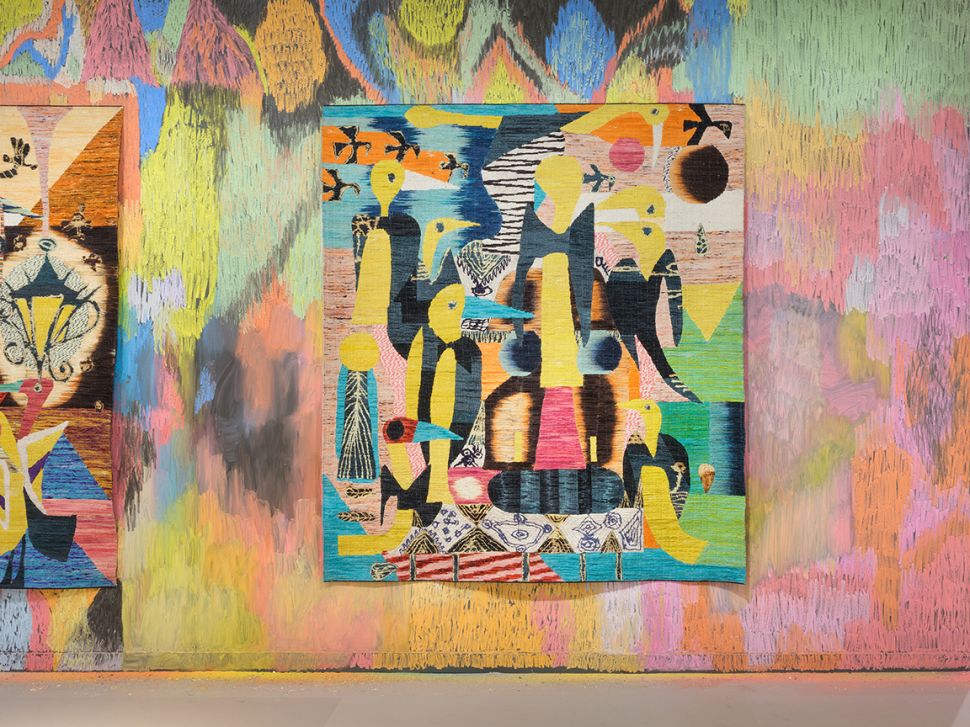