As someone who has personally spent too much time in too many art fairs over the past decade or so, I have become acclimated to a certain kind of art-fair art-viewing experience. Neon signs vie for attention with massive dayglo paintings, holograms in pristine plexiglass vitrines strive to out-wow the virtual reality experiences offered in Oculus Rift headsets, and row-upon-row of high production value chrome sculptures tempt viewers with #artselfie opportunities. It all starts to feel somewhat assembly-line and inhuman after a while, especially in the context of hangar-like convention centers.

There’s perennially plenty of all of the above to be seen at Zona Maco, Latin America’s largest and arguably most important art fair. But this year there’s also a quiet surprise: growing evidence of a renewed worldwide interest in traditional craft, from natural dyes and textile techniques to ceramics and processes that speak to labor.

And while conspicuous “making” has always had its moments of popularity in the arts—think of all the paintings about painting or the popularity of lumpy ceramics with drippy, hand painted glazes in recent years—this latest wave of artists exploring craft, especially in dialogue with traditional artisanship, feels somehow more sincere.

“Thinking with my hands”

In Porto-based Kubik Gallery’s booth, I meet artist Flávia Vieira, who lives and works between her native Portugal and São Paulo, where she’s writing her PHD thesis on the current resurgence of all things artisanal in the art world. Her installation combines traditional ceramic and textile techniques from Portugal and Brazil in a series titled Pandã, a Portuguese word that describes a combination of pattern and color. The fibers in her labor-intensive weavings are hand-dyed with natural pigments from Brazil—those rich blacks are painstakingly mixed from beans, charcoal and açaí. The ceramics she suspends in front of the tapestries seem to vibrate ever-so-slightly in tension with the clashing stripes. It’s an optical illusion so effective my camera actually had a hard time auto-focusing.

For Vieira, Pandã speaks to “a lack of hierarchies between objects.” The references she cites are as varied as Amazonian tribal body painting and the French artist Sonia Delaunay, whose underappreciated practice strove to break down distinctions between craft, art and design a century ago.

Why is there suddenly such a noticeable contemporary interest in traditional craft? “It’s a question I’m trying to answer!” Vieira, who is quite literally writing the book on the subject, replies. “Maybe we’re tired of plastic? We’re returning to these older technologies because we actually like the processes! Ever since Duchamp, people lost the will to make things, and maybe we’re tired of that! You know, art comes in cycles…everyone’s getting tired of staring at screens all day. There’s a global movement toward the DIY, and that has something to do with ecological concerns.”

A few booths down, I meet another fiber artist, Mano Penalva, with a solo presentation at São Paulo’s Central Galeria. “The art world has wanted the artist to be purely conceptual, to just think,” he offers. “But I like thinking with my hands!”

Part of Penalva’s manual thinking process is based in a frustration at his own lack of sewing skills: “I’m always looking for ‘easy’ ways to construct things. In Brazil, in Carnival, it’s all about the people realizing a very baroque idea with things like staples, hot glue, tape, and the hand…to me that’s the most ‘baroque’ thing—many hands working to construct an object.”

The Blurring Lines Between “Design” and “Art” Dealers

Zona Maco has historically had a small section of the fair reserved for design dealers, and notably, the distinction between those booths and the “fine art” booths is virtually nonexistent this year. This speaks not only to the explosion of traditional craft techniques supplanting paintings from gallery walls, but also to the curatorial rigor of the design dealers, which has remarkably improved over years past.

Design gallerist Lexing Zhang, who splits her time between Mexico City and her Miami space Art Lexing, has arguably the strongest booth in the whole fair. She’s showing a mix of designers who are so conceptual and artists with such design-oriented sensibilities it makes one question why we still consider them different professions.

The objects in the booth loosely trace the movement of ideas, materials, and people across the Silk Road. A sumptuous tapestry of overlapping weavings from the Dutch-Taiwanese Studio HVN references an eclipse and its importance in Chinese culture. HAWA Beirut Folding Screen by Lebanese designer Richard Yasmine celebrates decorative motifs and techniques that adorn the city’s architecture and interiors—from stained glass windows to tassels that look plucked from oriental rugs. It’s a surprisingly harmonious combination of textures and materials.

In the opposite corner, a porcelain iMac by Chinese ceramicist Ma Jun is a show-stopper. Were it not for its iconically 00s form, it would easily pass as an antique from a bygone, more elegant era. And perhaps it speaks to the questionable (but unquestionably soul-crushing) labor practices in the Chinese mega-factories where Apple products are assembled—this is what skilled labor looked like less than a century ago.

One of the fair’s most satisfying curatorial moves is the installation of chairs by architect-designer Oscar Hagerman, presented by powerhouse gallery Kurimanzutto. The chairs straddle an open space between the design booths and the section of the fair populated by local galleries. Hagerman began making them in the 1960s, each slightly adapted to fit the traditional techniques and local materials of a different region of Mexico. The result is a collection of furniture that’s cohesive, but, much like Mexico, surprisingly diverse. Kurimanzutto’s Miller Schulman concurs they’re a great representation of the country’s melting-pot ethos: “Mexico developed the world’s first truly cosmopolitan furniture, combining aesthetics from Europe and Asia with something uniquely American.”

For all the utopian connotations that come with evident craft and populist aesthetics—a celebration of labor, accessible materials and processes, the warm “aura” of the human hand—there’s room for dystopian critique as well. New York’s Tina Kim Gallery, for example, has a tidy booth of artists from South Korea’s resurgently popular Dansaekhwa movement. The loosely-defined style arose in the 1970s, when disenchanted academics developed an austere style as a subtle protest of South Korea’s authoritarian rule. Rejecting the somewhat conflicting images of “modernity” and nationalism the military government sought to promote, the artists of Dansaekhwa (literally “monochrome painting”) embraced repetitive processes and materials associated with poverty in solidarity with Korea’s oppressed working class.

Ha Chong-Hyun, for example, produced “paintings” by stretching burlap and pushing paint through the loose weave from the back of the fabric. The resulting compositions are hauntingly sparse, speaking to craft without displaying traditional brushstrokes we associate with beauty. Now in his 80s, the artist continues to work in his signature style, and he and his peers have found a booming international market for their eerie works after decades of relative obscurity.

Suki Seokyeong Kang, another Korean artist in Tina Kim Gallery’s booth, has a less angsty, but perhaps more ambiguous take on artist/artisan labor. She has tracked down one of the last craftsmen who make super-specific bamboo mats used in traditional Korean rituals. The process of producing the mats, involving a unique dying and weaving processes, is an almost dead art form. Here, she’s collaborated with a mat maker and framed their products behind intricate metal screens based on Korean musical compositions

Mexico City’s young-but-crazily-accomplished Galería Mascota presented a booth of works by Satan Ceramics, an art collective comprising J.J. Peet, Mary Fray, Pat McCarthy and the art star Tom Sachs. Everything in this booth is pretty great, but we have to end on this giant ceramic douchebag, embossed with the Seal of the President of the United States. It’s the perfect piece of craft kitsch for American artists to send to Mexico. 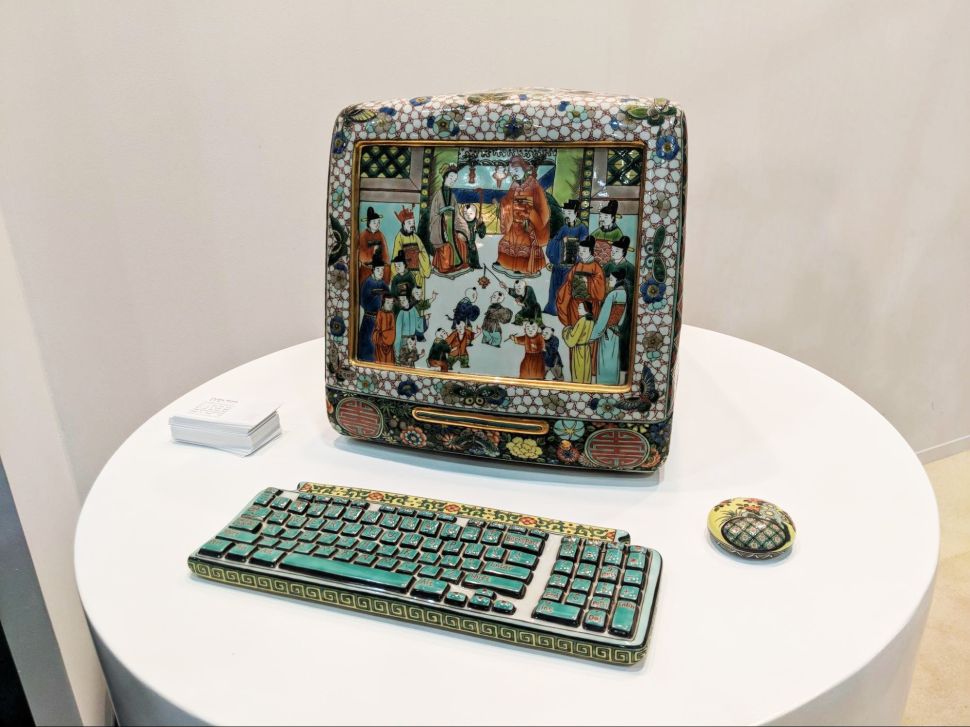