Since he appeared on a February episode of the “Joe Rogan Experience,” Yang’s candidacy has received worship from the most nefarious creatures of the far-right—with many highlighting his key policy initiative of establishing a universal ‘Freedom Dividend’ income to facilitate America’s transition to automation.

“It’s my perception that American nationalists are coming to grips with demographic replacement and hence welcome their Taiwanese overlord, Andrew Yang,” Faith Goldy, a far-right Canadian activist who changed her Twitter avatar in support of the candidate, told Observer. “Despite his many shortcomings, mass migration seems to be the result, no matter the president, and so $1,000 each month should steady their hands behind the wheel on America’s highway to hell.”

According to an analysis by Storyful earlier this month, the candidate’s name appeared across 4chan, Gab, and 8chan—three of the main social platforms used by the far-right—more than any other 2020 candidate. While some experts speculate this audience may be hyping Yang’s policies as part of an online disinformation effort to divide Democrats, the candidate himself is baffled by the support.

“It’s been a bit of a mystery to me,” Yang told Observer during a phone interview on Tuesday. “I’ve been talking about problems that affect truck drivers, the opioid epidemic that’s killing Americans in many communities. I think some people took my concerns for all Americans as speaking to a particular group. But anyone who takes five seconds to look at me and my background and what we stand for would realize that this campaign is built on the opposite American ideals that are held by people with racist ideologies.”

He claims those who harbor such sentiments have “no place in American society.” But Yang also sees his far-right supporters as products of a “hyper-corporatized version of capitalism” set to further displace millions of workers in retail, fast food and transportation.

“I do think economic insecurity can fuel a mindset of scarcity that then helps lead to xenophobia and racism and hatred,” continued the candidate. “If you can’t pay your bills and you feel like your future and your family’s future are insecure, and someone comes along and says ‘It’s their fault,’ you’re more likely to respond negatively to a group. I think getting off people’s throats through the ‘Freedom Dividend’ of $1,000 per month might actually help make people more reasonable and generous and accepting.”

It's not immigrants. It's automation. pic.twitter.com/e2M7F5KBei

The son of two Taiwanese immigrants, Yang’s worldview was informed more by “eclectic nonfiction” rooted in economics than philosophy. To support his policies surrounding “human-centered capitalism,” the candidate’s website features quotes from such American titans as Thomas Paine and Elon Musk.

“I get more interested in historical narratives than someone who talks about different theories of political evolution,” said Yang, citing his love for Robert Ford’s 2016 NYT bestseller Rise of the Robots. “I consider myself a presentist, which might seem like a futurist because our politics is decades behind.”

Having just reached the threshold of 65,000 unique donations to qualify on the Democratic debate stage, Yang also noted his supporters have told him he will “crush” President Donald Trump should the two ever go head-to-head on policy issues.

“I have many types of supporters, but I’ve gotten those comments from people in Ohio and other parts of the country [that voted for Trump],” said the candidate. “I’m personally of the mindset that we need to solve the problems which got him elected in the first place, which includes the automation of four million manufacturing jobs… and then beat him at the ballot box.” 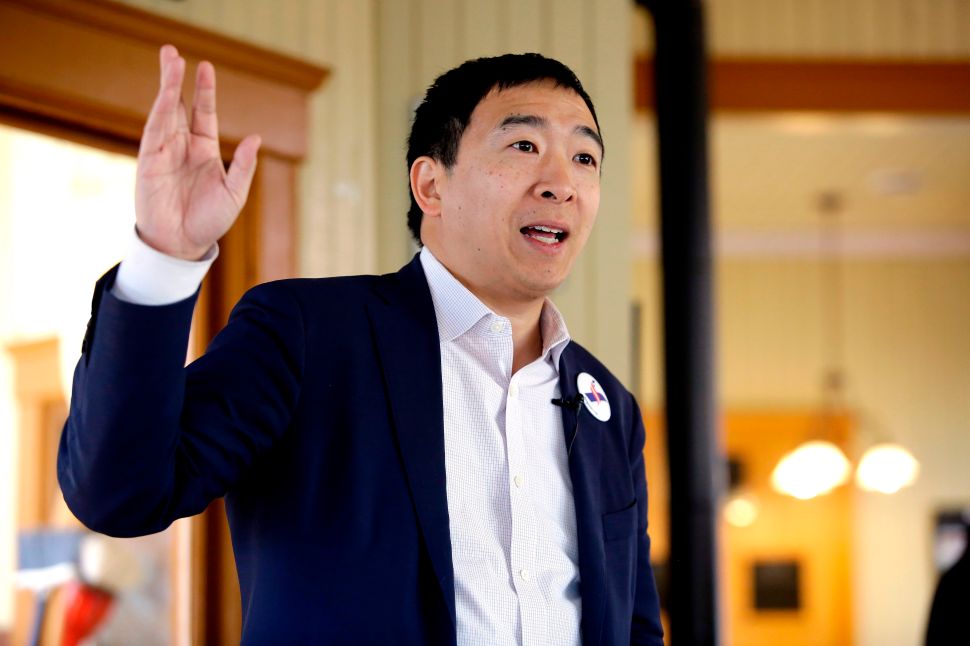