In the art world, at the center of every six degrees of separation story is an international shipper. To be a successful handler, the job requires a near photographic memory of faces, names, and art, an understanding of logistics and crisis management, and a good deal of charm. Who better, then, to see the Armory Art Show with than Jonathan Schwartz, founder of the 30-year-old esteemed art shipping company Atelier 4? For every work of art we saw, he had a story to go with it.

Seeing the show with Schwartz makes for a unique day, but in many ways, our tour was a typical Armory experience. If the structural issues that forced the last-minute closure of Volta were an issue for the fair, there was no evidence of it by Wednesday evening. As is common for the event, the VIP preview became near standing room only, the halls filled with A-list collectors and art professionals. This included curators Hans Ulrich Obrist (Serpentine), Alice Grey Stites (21 C Hotel and Museum) and Cecilia Alemani (High Line Art Program), mega-collectors Mera and Donald Rubell and the Hort Family, and New York Magazine art critic Jerry Saltz to name just a few. By 5 p.m., Saltz was crashed out on the couch. “I’m done with art fairs,” he told me. “You’re going to have to explain this to me. What is this?”

By “this” I understood him to mean the art viewing environment, which is singularly unsuited for looking at art. It’s not the so much the booths themselves that are an issue but that their proximity to one another overwhelms the senses. The experience feels a bit like going to a wine tasting in which there are a hundred wines to try but no palette cleansers. By the end, you’re passed out on a sofa with only a vague idea of what you’ve seen and done.

I didn’t have the heart to tell Saltz I didn’t think anyone, let alone me, could weather this kind of sensory overload. My solution was simply to buffer the whole experience with Schwartz. I’m not sure I was able to consume any more art or spot more trends, but I had a better time doing it. Our conversation and show highlights below.

Paddy Johnson: Let’s start with Pier 90, which hosted Insights (20th-century art) and Focus (invitation only solo and dual artist booths of new art). This part of the fair tends to attract less attention than its contemporary blue-chip partner on Pier 94, but it had its share of winners. For example, we both thought the Rosenfeld Porcini booth did a good job of pairing vintage furniture—the hairdresser hoods—with collages that were similar in palette and subject matter. (One showed figures at a hair salon.)

Jonathan Schwartz: That was the best-curated corner in the entire Pier. The cuteness of the figures could have been off-putting, but the use of different mediums like the pasting of CD’s over the eyes added a playfulness to the work. It wasn’t too kitschy.

Johnson: Yeah, the figures kind of looked like bobble head kids! I thought there was a lot going on with these images—variation of texture, beautiful light washes in the background, intricate patterning. They are really just a pleasure to look at—I could imagine them living in a home for years and never tiring of them because the compositions are so interesting.

Johnson: What about The Hole’s booth? I thought Alex Gardner’s paintings of black silhouetted figures really stood out in their spareness, and the sharp architectural elements of the booth design contrasted the soft curves of the figures and their sheets.

Schwartz: Agreed. I thought the use of colored gels over the lights really differentiated the booth from the others. When I looked in there I was transported out of the fair for a moment.

Johnson: The Hole is really good at exhibition design in general. Their booths at fairs stand out for this and so too do their gallery shows. There’s always some new floor treatment or blackened room that sets the work they sell apart from everything else. The simplicity of figurative rendering gave the paintings a real power, as did their lack of faces. The obscured face seems like a trend here and elsewhere. Also a trend: heavily patterned work assembled from beads, legos, seeds, keyboard keys. If there’s a mass-produced material that can be easily sourced, an artist has found it and made wall tapestry out of it.

Schwartz: Patterned work is a trend for sure. I’ve been seeing a lot of that over the last couple years from fair to fair.

Johnson: Also worth noting about this fair: too many dealers offering minor works by major artists.

Schwartz: Yes, we saw more than one booth with Morandi drawings, a major artist for sure, but those sketches were the most unimportant of his works.

Johnson: Susan Sheehan Gallery offers a reprieve from that problem. She has a great eye, and doesn’t settle for secondary prints by A-list artists, or those anyone can find. She handles Post-War Contemporary prints and her booth was another that stood out for its spare approach.

Schwartz: She’s been handling this work for 30 years, too, so people know to come to her for this kind of art.

Johnson: I nominate the P.P.O.W. booth for best booth at Pier 94, but with the caveat that the wallpaper map of the world backing Suzanne Treister’s drawings helps land the gallery in this spot. It’s very photo friendly. They’re bizarre, delicately rendered posters for female survivors in a post-internet apocalypse. According to the text in one piece, this is two million years after the weaponization of poetry. Even in our current dystopia, I find that kind of weaponization hard to fathom.

Schwartz: Agreed. This is a situation where if the whole wall was one piece [you know what you’re getting], but if the drawings are sold separately [and they are] what they look like here won’t be reproducible. So, it’s a bit misleading to consider this work as if it’s a giant wall piece even though that’s how it’s presented.

I loved the fantasy and psychedelia aesthetic, but was also drawn to a huge tank painting by Anton van Dalen.

Johnson: The juxtaposition of male and female perspectives in this booth was striking.

Schwartz: We missed David Nolan’s booth on our first pass, but I went back yesterday, and this Jorinde Voigt survey is my pick for best booth in show. Again, this is a fantasy of future—it looks like someone trying to figure out a physics problem, but you only saw this if you looked carefully. The hand was extremely confident and the exhibition as a whole spanned eight years. I really wished I could spend a lot more time here, but I can’t because it’s an art fair and that’s the way it goes. It’s why seeing art in museums is preferable.

Johnson: It’s worth mentioning here that we’re both successful art professionals and we missed this booth at the opening. Repeat visits are advised.

As gallery director Mike Egan told us at the fair, “this work requires context.” It’s a pool float cast in resin, in which she uses the design of an ISIS banner and replaces the text with the “Sha na na na na na na na na na knees, knees” from a Guns and Roses song. “She’s taken all these ISIS recruitment tactics and reconfigured them to appeal to youth culture.” Egan told me. Speaking to this, he lamented, “I’m surprised more people haven’t realized this is the selfie station of the fair.”

Johnson: It’s going to be hard to tell from the photograph, but the paint on these Zhu Jinshi canvases at Pearl Lam Gallery might be eight to ten inches thick. How long does it take for these to solidify?

Schwartz: You can take an oil painting with this much impasto and it’s 100 years old, stick a needle in it and it would come out with wet paint on it. Oil takes forever to cure. It’s freakin heavy. I think this is kinda nice. For what this is. I hate to say it, but it’s quite masculine. It’s aggressive. It’s strong. I wouldn’t say gestural because it’s too thick. It flows nicely.

Johnson: Yeah, I wouldn’t call it masculine, but all those other adjectives describe this painting well. This is a landscape literalized through paint—topographical, but also evoking the earth. You can actually see the gritty pigment in this piece—it looks like dirt.

Johnson: Federico Solmi’s painting-video hybrids resemble the early viral internet pages of Kenneth Tin-Kin Hung, which consisted of a near bottomless reservoir of United States iconography, collaged into schizophrenic politically-driven compositions. Solmi’s doing pretty much the same thing, but in the form of an object. In these works, the United States is cast as colonizer and oppressor. For example, in The Grand Masquerade, 2018, throngs of Native Americans fight colonists inside a football stadium. These aren’t messages viewers are supposed to struggle to decode but is that a problem? Is it overly simplistic?

Schwartz: I like to consider the context of the gallery. Ronald Feldman was the original Jeffrey Deitch. [Deitch has repeatedly made a splash in New York as a dealer known for launching exhibitions that verge on entertainment.] Feldman’s been showing very critical work since the gallery was founded in 1971, but he was always into spectacle. Yes, the imperialist military figures create a clear political message that’s not intellectually challenging, but sometimes that’s OK. I don’t know how I feel about it for a collection though. Maybe if you had a whole room of it?

Johnson: Right, so the more of it, the more the impact? These works use a carnival-like palette, a trending color scheme we finally settled on after having tabled “light-brite” and “magic loom” as possible descriptions. I guess we’re past the days of gradients. Anyway, I think the maximalist approach to this work matches my understanding of United States culture, so I’m OK with a simplistic message.

Johnson: Speaking of clear messages, this lightbox with the text, “Speak the truth, even if your voice shakes” by Sam Durant has been making the rounds on social media. It reminds me of the Nike Colin Kaepernick ad, “Believe in something. Even if it means sacrificing everything.” Durant’s piece was made three years earlier, though.

Schwartz: Literally, I agree with the message. But, if we’re talking about aesthetically, as a work of art, it’s not work that I’m totally into. Text based art is difficult. Maybe I’m just a little limited, but my favorite conceptual artists have been Duchamp and Yves Klein.

From my point of view, though, I’m also thinking about questions like, how am I going to protect this work? As a shipper, that’s always part of my perspective. 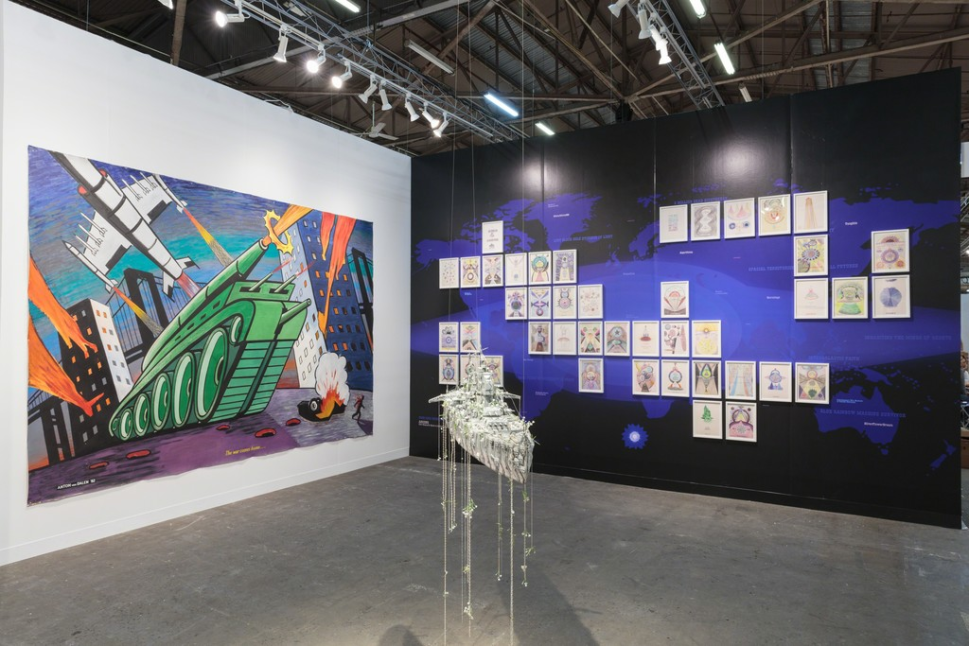