On Thursday, in honor of the life of Johann Sebastian Bach, Google has launched an interactive Google Doodle that features technology more than three years in the making: artificially intelligent software that uses “knowledge” gleaned from 306 separate Bach chorale harmonizations to generate music in the German composer’s unique style. Put more simply, if you feel like it, you can seamlessly write your own simple melody and the program will add harmonies for you.

“Bach’s music, it has all the rules of how to write good harmonies and melody baked in,” said Jacob Howcroft, a software engineer for the Google Doodle team, in a YouTube video accompanying the doodle. “It’s a really good resource for machine learning to learn music.” Obliquely, he’s referring to the precision of Bach’s compositions; the mesmerizing quality of inhuman perfection that certain works of art sometimes have.

Artificial intelligence, despite its impressive moniker, can be amusingly unreliable. The competence of technology that is meant to improve depending on how much data is fed into it is always a bit touch-and-go during its initial operational stages. Artificially intelligent chess computers, for example, were for a long time thought of as nothing more than dinky buckets of bolts that were no match for human grandmasters. “The only way a current computer program could ever win a single game against a master player would be for the master, perhaps in a drunken stupor while playing 50 games simultaneously, to commit some once-in-a-year blunder,” the psychologist and prominent chess enthusiast Eliot Hearst wrote in 1977.

But machines, like human beings, tend to comprehend things faster as they accumulate knowledge, and Google’s AI Bach program is no exception: the first two simple melodies I submitted to be harmonized resulted in compositions that were a bit garbled and discordant, but the more I used the tool, the more the AI improved. On my third try, I made a mournful, movie score-like sequence of notes that would sound right at home on a harpsichord.

Plus, the Bach generator is just plain fun (even addictive) to use. Those with more seasoned musical educations will be frustrated about the fact that you can only select quarter notes (like plotting points on a graph) and that there’s no option to hold tones for longer lengths of time, but what you can do is modify the B.P.M. so that your little song speeds up or slows down according to your preference. Go forth, budding maestros, and compose. 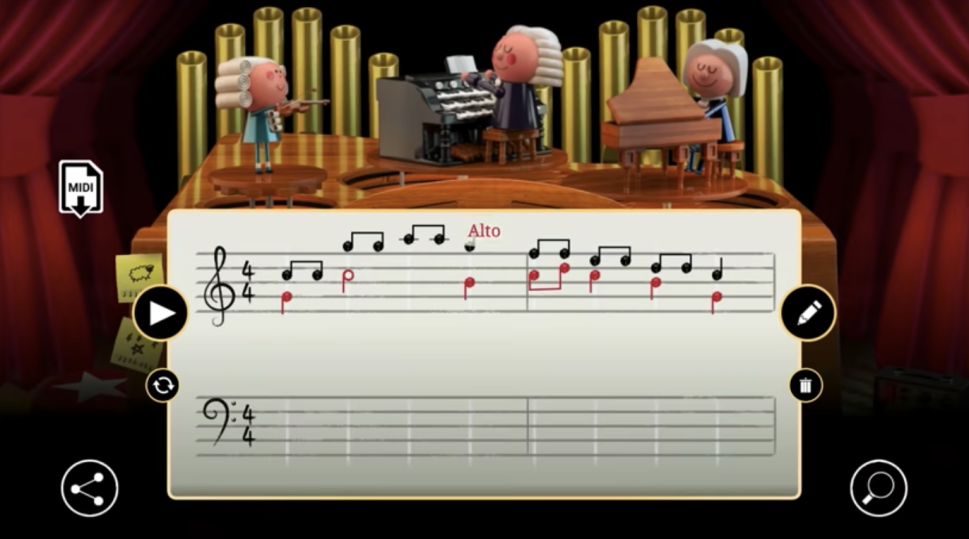