It’s unclear why Bret Easton Ellis chose to call his first non-fiction effort White. The sprawling series of interlocked essays—somewhere between a screed, a polemic and a lightly edited Medium post—gives the author, 55, a more capacious forum for what he does on Twitter: “to be a bad boy, a douche, to lead my own dance in this writer’s funhouse,” by his reckoning in White. Maybe the book’s title refers to the color of his skin, and that attendant privilege (one that he’s fine with acknowledging, but never apologizing for); maybe it obliquely alludes to how reading this book is a bit like being accosted by a sniffling cokehead who’s forgotten if he already told you how it’s actually liberal fascism that we need to worry about in the age of Trump. If Ellis’ fiction has birthed, in his words, a “gleaming nihilism,” then his non-fiction book serves up something less delectable: a stale nostalgia. Forget White—this collection could have been called Back In My Day…. Or, perhaps, Triggered! : Telling It Like It Is In An Age of P.C. Insanity.

And what a sustained bummer it is to be along for this ride. Ellis, as a novelist, has been capable of feats of genius and hilarity. He’s best known, of course, for American Psycho—both the 1991 novel and its 2000 film adaptation—yet that book looms too large over his reputation. Its brand-obsessed story of a Wall Street serial killer grows weary after the shock factor wears off (though it is redeemed by several unforgettable set pieces, like one in which Patrick Bateman and friends go to see U2 perform at the Meadowlands). But his 1998 epic, Glamorama, is a thing of wild beauty, an oddly prescient pre-9/11 story in which fashion-world insiders get sucked into a global terrorist conspiracy. And Ellis’ 2005 work of autofiction, Lunar Park, is also worth marveling over, starring a bizarro version of the author as a suburban dad, struggling with addiction and a haunted house.

Following the release of his most recent fiction, 2010’s Imperial Bedrooms, Ellis has more or less gone dark in the publishing world. He was moving away from “what I now saw as the fake enclave of the novel,” indulging in other media: a podcast, a Twitter account, a Lindsay Lohan film with a 22 percent Rotten Tomato rating. Ellis was no stranger to trouble and controversy, of course, and he’s been a celebrity since the mid-1980s, when he published his debut, Less Than Zero, at the age of 21, but suddenly people were becoming pissed off at him in new and different ways. He had no filter, and he was proud of it. In Twitter he found an outlet to scatter nuggets of irreverence and bile. The pushback to all that free speechifying seems to have provided the genesis for White, which is primarily a prolonged whine about how close-minded people have become, especially millennials (Generation Wuss, by Ellis’ coinage).

So what we get is a portrait of the artist as a middle-aged martyr, speaking truth to idiots. White is littered with a familiar, dog-whistling vocabulary—triggered, safe spaces, coddled, woke, virtue-signaling. (Of the word snowflake, he writes, “I enjoyed using this term because it seemed, amazingly, to push so many buttons.”)

The tone here often veers to a wistful, grandfatherly one, even when the subject at hand is the Golden Age of porn discovery (when a young lad had to get his smut via old-fashioned magazines, rather than having “every kind of sex act available on your phone within seconds”). White posits that the present sucks—everyone is uptight, easily offended and narrow-minded—whereas the past was just fantastic. There were no helicopter parents! Pre-teens watched horror movies and ran around, feral, unsupervised, without being murdered! Meanwhile, back in our stultifying current moment, a member of Generation Wuss was liable to erupt into tears over a tweet (or the fact that a massively corrupt sociopath had been elected president). “I never wanted to be the old geezer complaining about the next wave of offspring who were supplanting his own,” Ellis laments, “though certain people definitely thought that’s exactly who I was.” Shocking.

What’s maddening about White is the way in which Ellis falls back into a tired groove, diverting otherwise interesting essays back to the same bitter source. In one representative, 7-page passage, he begins by talking about his own experiences as a New Yorker on September 11—only to careen pointlessly into a long discussion of a Frank Sinatra documentary…and how Ol’ Blue Eyes would never survive in today’s culture: “A chief of the white male patriarchy! Toxic masculinity! Don’t buy his records, comrade!” The book saves its sharpest ire for our so-called culture of victimization, and yet the hero of White is the biggest, loudest victim in the room—an impish troll savaged by the prudes who can’t take a joke; a levelheaded dude who is sick of the anti-Trump resistance and its “constant shrieking of the unconsoled,” despite the fact that the writer himself “just wasn’t that interested in politics.”

“Feelings aren’t facts and opinions aren’t crimes and aesthetics still count,” Ellis says, “and the reason I’m a writer is to present an aesthetic, things that are true without always having to be factual or immutable.” That’s fine when Ellis is talking about fiction and art—it’s the sheer uncomfortableness and risk-taking of his novels that makes them great—but things get sticky when applied more broadly. Most confusingly, Ellis’ problem with the 21st century and its internet culture seems to be that divisive discourse is silenced and neutered—that someone like poor Milo gets his book contract cancelled!—and that what we need is more assholes who are willing to speak their minds. People like, say, Charlie Sheen and Kanye West.

This is all a shame, because there are genuine moments of discovery in White, submerged beneath the self-indulgent bloviating. There’s on-brand gossip—Ellis doing coke with Basquiat in the bathroom of the Odeon—and behind-the-scenes reminiscence about the author’s life in New York while he was writing American Psycho (in a “rented condo on Thirteenth Street, which had a futon mattress on the floor and some patio furniture scattered around, along with an elaborate stereo system that had an insanely expensive turntable”). There are astute, critical ruminations on films, from American Gigolo to Moonlight. But too often, White skips back to its main refrain: Bret Easton Ellis, like Donald Trump, is a “disruptor”; he’s too fearless, too honest, for our buttoned-up world to accept. The world was mean to Bret, and so Bret wrote an entire book in response: 261 pages rather than 280 characters. It’ll be a shame if Ellis never pens another novel, but perhaps an unexpected career turn is just around the corner. I’m thinking of a Fox News primetime show: Ellis with his co-host, late-career Louis C.K. They can own the libs and mock the Parkland kids. They can call it White. 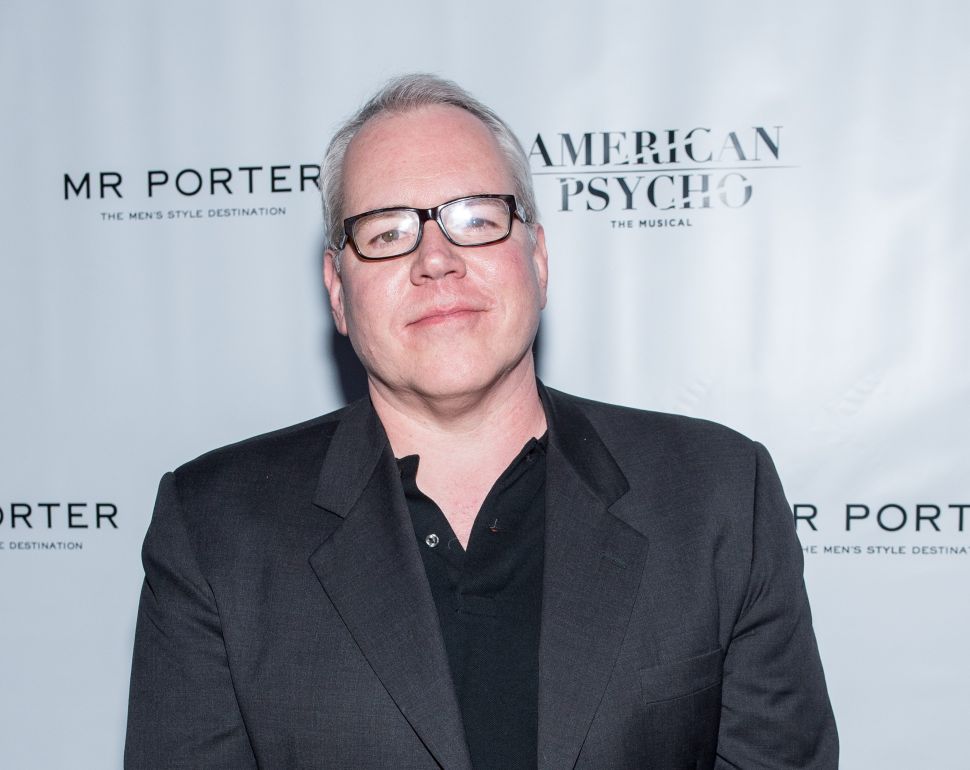