It’s a little like something out of a mid-1980’s horror movie: a seemingly innocent and objectively gorgeous outbreak of wild poppies springs up out of nowhere in the foothills of a California town, and for a while, all is well as the locals bask in nature’s gift. But then, the crowds appear; pulled towards the phenomenon by a force they themselves don’t quite understand. Like the locals, the out-of-town visitors are also passionate seekers of beauty, and the vivid orange blossoms they’ve seen in pictures seem to be nothing more than an offering from the earth that’s completely pure in its benevolence. But the crowds are starting to cause problems, and the flowers are perhaps not quite what they appear to be.

On Tuesday, CBS News reported that the innumerable beautiful poppies that have sprung up in Walker Canyon, the hills surrounding Lake Elsinore, had caused a public safety emergency over the weekend. Due to the fact that “tens of thousands” of people had descended on the town to check out the unprecedented spectacle, the canyon was briefly shut down on Sunday.

Fights over parking spots, flowers crushed by trampling feet and overwhelming traffic congestion were all on the table, according to mayor Steve Manos, who also told CBS that one of his employees was struck by a car in the commotion and that Lake Elsinore requires further assistance from both the state of California and the county. “Fortunately the freeways seem to be working fairly well so far, but we are full,” Manos said in an Instagram video posted by the city on Monday. “If you have the opportunity to come back here, maybe later or on another day, we would really appreciate that.”

It’s easy to make fun of the huge swaths of people with Instagram accounts who’ve come to check out the poppies and unwittingly cripple the city’s resources, but what’s harder to do is grapple with the question of why exactly the flowers are there in the first place. The super bloom’s glorious abundance is easy to read as vital and indicative of healthy soil, and some commentary on social media reflects this viewpoint.

But the rainfall that made the poppies possible is actually out of the ordinary. Springtime blooms in the desert are to be expected, but these Lake Elsinore flowers came about due to an “uncharacteristically rainy fall and winter season” which “effectively ended California’s longstanding drought,” National Geographic reported.

These are textbook examples of the increasing “precipitation extremes” predicted by UCLA climate scientists, who published research in 2018 which postulated that by the end of this century, California will see a dramatic increase in its number of extremely dry and extremely wet seasons, as well as a major uptick in the likelihood of flooding incidents. Therefore, it’s likely that the especially rainy California winter that prompted the Lake Elsinore poppies wasn’t an isolated event, but rather an indication that radical transitions in California weather are causing unprecedented botanical anomalies. These changes, UCLA researchers said, are due to “a warming atmosphere and warming oceans.”

“Other parks in the region are just starting to see their flowers bloom, which means poppy mania is infectious and spreading,” CBS said. Metaphorically speaking, “poppy mania” is actually a particularly beautiful way of articulating the consequences of the Anthropocene. 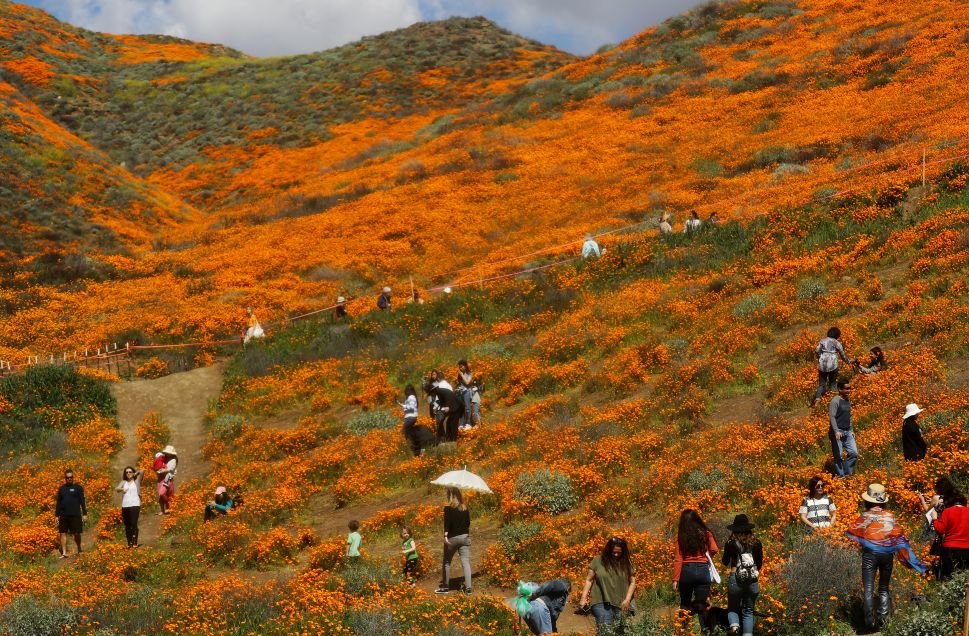