Yes, I’m going to go there.

As in down there, the below-the-belt line down there.

Waxing the City, part of the multinational fitness and beauty behemoth Self Esteem Brands, is coming to a street corner near you, and they won’t be satisfied until America has parted ways with all its cumbersome nose hair, bushy unibrows and, as Rebel Wilson describes it to Dakota Johnson in the 2016 chick flick How to be Single, that “hard ball of petrified curly fries” that carpets genitalia of all shapes and sizes from sea to shining sea.

Waxing the City—which originally started out as Denver-based “Wax in the City” until HBO cried foul and issued a stern letter of objection for infringing on its vaunted Sex and the City franchise mark—was scooped up by Self Esteem Brands in 2012. The new parent company, which specializes in acquiring and then quickly scaling health-related franchises, saw the potential for accelerating the business, and ever since, Waxing the City has been on, as they say, a real tear.

The company now opens an average of two stores a month and is present in 33 states, making it the fastest growing waxing franchise in the United States, second in total waxing studios only to Florida-based European Wax Center, which has been selling franchises since the early 2000s.

“We understand that waxing can be a bit awkward and intimidating,” said Waxing the City Brand President Angela Jaskolski, a longtime veteran of the beauty industry. “We know it might not be for everyone, but we also know that there is a large and growing number of women and men that want nothing to do with excess body hair. That’s where we come in, to make their experience as easy as possible.”

“Our studios are conveniently located, safe, clean, professional and efficient. Waxing is as good for the skin as it is for the psyche. Choosing to be smooth and clean down there gives many of our clients a boost of confidence.”

In declaring jihad on unwanted body hair, Waxing the City is unleashing a cultural zeitgeist with a notably Brazilian accent, as in Brazilian bikini wax—that South American import that everyone talks about but seldom lays eyes on. Waxing the City’s Brazilian—which, unlike many of their competitors, is offered for both women and men—is just one of the products on the company menu, but it is considered the franchise’s filet mignon.

Untangling the History of Humans and Their Pubic Hair

The history of pubic hair removal dates back thousands of years, and its popularity has ebbed and flowed with the tides of time. Ancient Egyptians reportedly considered pubic hair indecent, and are credited with inventing the original waxing technique which has evolved surprisingly little in the past 5,000 years. The Romans associated a hairless pubis as a sign of prestige—a vanity marker for members of high society.

We Americans, the progeny of those all-so conservative pilgrims that founded our country, have only recently embraced pubic hair removal. In the 19th century, a clean-shaven vaginal area was actually seen as a negative, suggesting that a woman might have been infected with pubic lice, or worse—a hairless muff could be a sign of promiscuity and an indication that a woman was suffering from syphilis, gonorrheal warts or some other variant of fin de siècle STDs. In fact, the concern over a hairless mons Venus was such that it gave rise to one of the oddest products humans have ever invented: the merkin, AKA the pubic hair wig.

This trend of American pubic laissez-faire continued through much of the 20th century, perhaps reaching its apex in the ’60s and ’70s, an era in which hair—in all its forms and in all the places it is grown—was seen as a form of protest of the war in Vietnam and a way of sticking a thumb in the eye of an increasingly conformist 1950s post-war America.

But all that changed in 1994 when the J. Sisters—Jocely, Jonice, Janea, Joyce, Juracy, Jussara and Judeseia—seven Brazilian sisters from Vitória, Brazil, who had emigrated to the United States in the 1980s, began offering full-blown bikini waxes at their famous Brazilian beauty salon on 57th Street in the heart of Manhattan.

The J. Sisters’ technique for removing all the hair down there, from front to back, quickly caught on among Manhattan’s trendsetters, and it soon spread around the world and became known simply as the Brazilian.

“Many times women will come into a studio and just want to do their eyebrows, or perhaps remove some unwanted upper lip hair, but they are curious about doing more. The simple procedures serve as a type of ‘gateway drug’ for more advanced ones. And once they try a Brazilian, they wonder how they ever managed to live without one before. It’s a very satisfying feeling,” explained Waxing the City’s Jaskolski.

Samantha McMeekin, writing for Glamour in the U.K., was more direct in describing the benefits of her recent first-ever Brazilian waxing, “The slippery smooth sensation of your first-ever freshly waxed puss is pure satisfaction. Just wait until you shower (it’s like a slide).”

Samantha, my dear, you paint quite the visual.

Of course, as any journalist worth his or her salt should do, if I was going to write about a fast-growing franchise chain of waxing studios, some original research was in order. I had to see the product for myself.

So, I took a deep breath, mustered all of my courage… and sent my wife, Gilda, to a Waxing the City studio.

Gilda is from Angola where the influence of Brazilian beauty techniques is well established; consequently, she is very familiar with what constitutes superior waxing service. Her report back from the field about her visit to a Waxing the City studio was overall quite positive. In addition to the professional and clean environment, she commended the work of their Cerologists™ (a term Waxing the City coined from the Portuguese word ‘cera’ meaning wax)—the highly trained staff which tend to you once you are in a studio.

(I would be remiss in my journalistic duties if I didn’t point out that my at-home inspection of Waxing the City’s handiwork also yielded positive results.)

Waxing Is a $10 Billion Industry—and Growing

According to industry experts, the global waxing industry is a nearly 10 billion dollar endeavor, with nearly a quarter of that revenue being generated in the United States. And it’s growing: forecasts expect the hair removal industry to double or treble in size in the next decade as more and more people get familiar with the Brazilian and companies like Waxing the City continue their Starbucks-like expansion into strip malls across the country.

For Chuck Runyon, the CEO of Self Esteem Brands, the parent company of Waxing the City, the expansion of new franchises is timed perfectly to meet growing demand. “We have just about reached the tipping point, where waxing—all types of waxing—is going very mainstream. We as an industry will soon be as commonplace as nail and hair salons in the very near future,” commented Runyon. “And our growth will not just be in terms of new studios and new locations, but it will be in new product as well. We are already rolling out an array of new innovative services—just recently we unveiled our ‘lash lifts,’ which are basically a perm for the eyelashes—moves like this will ensure we maintain a leadership position in the industry.”

At present still 75 percent of the waxing industry is comprised of small ‘mom and pop’ single establishment proprietors, but that is changing, as customers demand increasingly technical services and a consistent product experience for a clientele constantly on the move.

But the biggest competitor to Waxing the City isn’t these small establishments, nor the rise of another new competing franchise, its Gillette, shorthand for the status quo: razors and shaving.

But no razor, no matter how state-of-the-art, will get you that ‘ slide’ like the one Samantha McMeekin described. 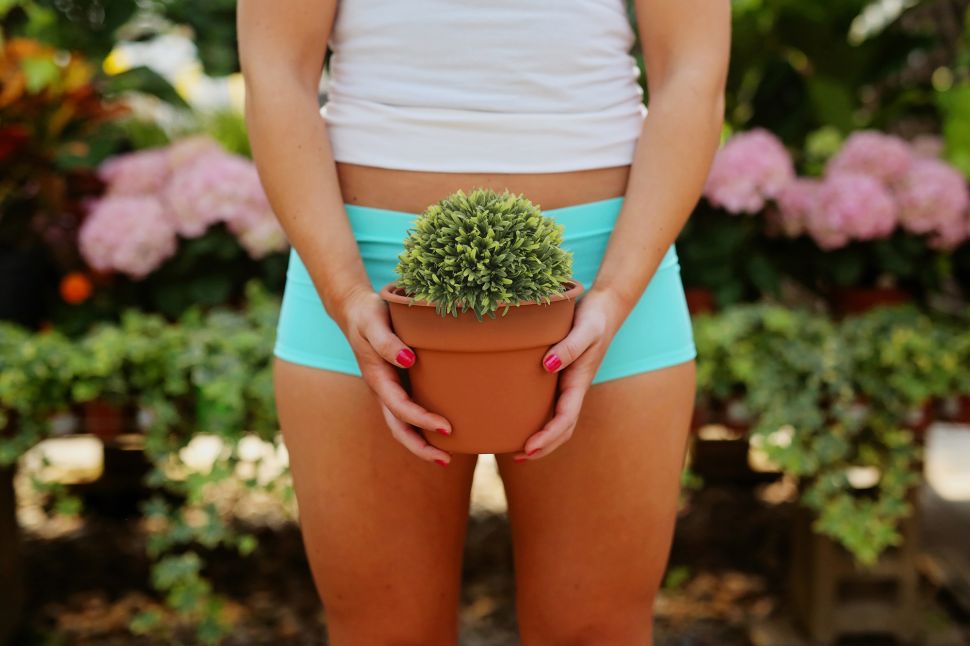