Whatever you think of Twitter and its corrupting influence on politics, the news cycle, people’s attention spans and general civility, it has brought us at least one great reliable thing: Catastrophe. Sharon Horgan and Rob Delaney’s beloved series may never have happened if she hadn’t followed him and he hadn’t DM’d her.

“When we’re in makeshift bunkers as the bombs fall, we can all say, ‘That was a fun sitcom. I think we all enjoyed it. And, in fact, it was worth it,’” says Delaney, who co-created and co-wrote the show with Horgan.

Catastrophe premiered in the U.K. in 2015 before becoming one of Amazon Prime Video’s breakouts in the U.S. Now, after strong three seasons, it’s drawing to a close with six final episodes, which all premiere March 15. “It sort of felt right,” Delaney says of the decision to tie up the acclaimed comedy. “As we started the fourth season we had a pretty good idea what the ending should look and feel like. We didn’t want to overdo it. We didn’t want to overstay our welcome. We were very proud of the first three seasons, so we thought, Let’s not beat it to death.”

The story thus far: Sharon (Horgan), an Irish school teacher living in London, gets pregnant after her one-night stand with Rob (Delaney), an American businessman and recovering alcoholic in town for work—hence the title. But it turns out the two are actually pretty well matched, so they decide to make a go of it as a couple. They get married. They have another kid. They deal with each other’s bonkers family (including the late Carrie Fisher as Rob’s mother). In Seasons 2 and 3, their marriage hits a rough patch: He starts secretly drinking again; she flirts with infidelity. Last season ended with a car accident that forced Rob to admit to Sharon that he’s fallen off the wagon.

Horgan and Delaney’s initial pilot script began in what essentially became the middle of the series: with their characters already several years and a couple of kids into their relationship. “We knew we wanted to write about a marriage—but a real, normal marriage, and as funnily and truthfully as we could,” Horgan explains, “but the people who were going to be putting us on the telly recognized the value in spending more time on that courtship era, showing what it looks like to get to know someone while you’re carrying their baby.”

Still, having a rough road map didn’t mean they knew the ultimate destination. “I think we’ve known what’s going to happen at the end of each season,” says Horgan. “But beyond that, there was never a sort of godlike overview of what we do to them in the last episode of the final season. That just came to us at the beginning of writing this season.”

They did, however, know they wanted to lighten the mood in Season 4 after dealing with some particularly heavy material last season: Rob’s drinking, the death of Sharon’s father, her grief, his crisis. A pair of off-screen deaths have also cast a shadow over the series: Fisher died unexpectedly in 2016, soon after wrapping her scenes in Season 3. And in early 2018, Delaney’s two-and-a-half-year-old son passed away after an extended battle with brain cancer.

“It went pretty hardcore and dark,” Horgan says. “So we wanted to make sure people didn’t think, That’s the route we’re on now. That’s the tone we’re taking.”

Horgan and Delaney’s electric chemistry is still there—the new episodes are funny as ever.  She’s still winningly caustic; he’s still the lovable papa bear who’s quick with the retorts. That said, maybe it’s the residual anxiety from last season, or the fact that a show called Catastrophe just can’t have an easy, sunny happily-ever-after moment, but it’s hard not to wonder when the other shoe is going to drop.

“Wait until you see the final episode,” Delaney warns. “We drop a big shoe on your ass. It’s like a big bucket of shoes!”

“We’ve sort of messed with people’s heads for sure,” Horgan adds. “But we like that. It’s nice that there was this false comfort there in the earlier episodes. It makes me happy that [viewers felt] that around the corner something bad’s gonna happen.”

But it’s hard to imagine Delaney and Horgan throwing anything at their characters that their marriage couldn’t withstand at this point. For them, Catastrophe is essentially a love story.

“It’s about the endurance of love should you choose to feed it and nourish it and take care of it,” Delaney says. “The thing about Sharon and Rob is they could easily split up. They disappoint each other, they lie to each other, they lie to themselves. They do things that could tear a relationship apart. But whether or not they’re consciously aware of it, they are making choices to remain committed to each other.”

He continues, “It’s all about this quotidian day-to-day stuff you have to do to make a relationship endure. Despite all their foibles, they really do do that.”

The fourth and final season of Catastrophe premieres March 15 on Amazon Prime. 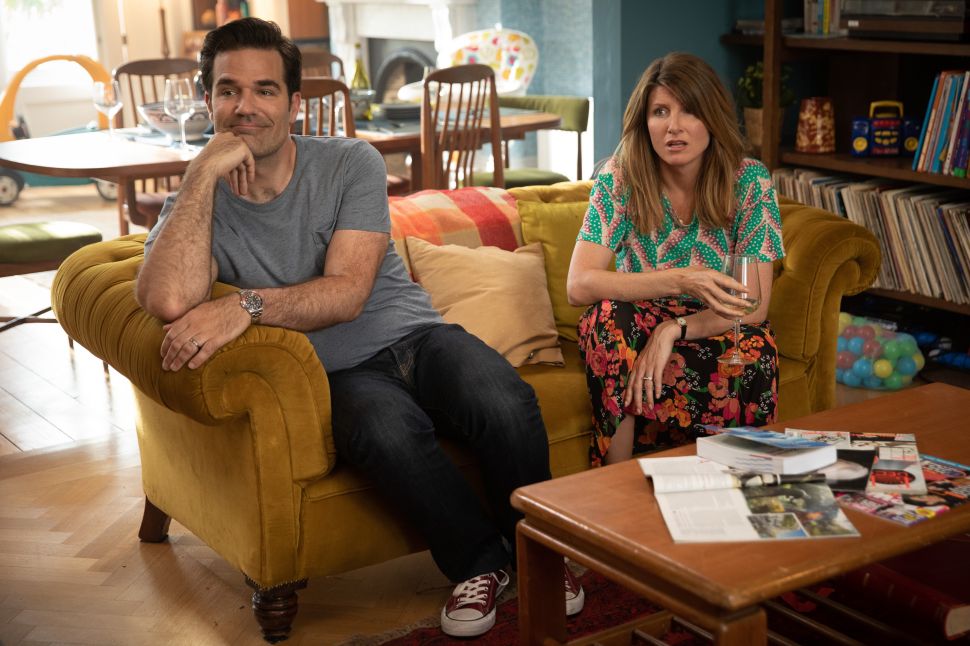