Christine Goerke admits she was nervous the first time she stepped onto the “machine.” Before rehearsing for her Met debut as Brünnhilde in Die Walküre, Goerke was already familiar with the infamous and once-controversial set design for the Robert Lepage’s 2012-2013 production of Wagner’s epic Der Ring des Nibelungen. The large wall can morph into a gateway to Valhalla or a ladder to the sky, but once came with a slew of issues ranging from noise distractions to the threat to actors’ safety.

The Met’s 2019 production of the Ring Cycle invested more time and innovation into the intimidating set piece, reworking the machine so that it would be quieter as it transforms from deep seas to mythic skies. “They not only reworked the machine to make it quieter and to ensure that it runs more smoothly,” Goerke explained, “but they have also put a huge amount of safety features that weren’t necessarily there the first time. And I have to say it’s really kind of fun.”

Whereas Goerke, who has sung the role of Brünnhilde to wide acclaim in Chicago, Houston and Canada, has only known the updated version of the “machine,” her costar Greer Grimsley is returning to his role as Wotan, which he held in the 2012-2013 season, but working with a whole new structure.

“I was still feeling somewhat new on the machine but I was having fun exploring it,” Grimsley told Observer. “With things safer, we’re able to trust things more and actually get out there and really play on it, which is fun. I knew what to expect coming back and [am] pleasantly surprised at the improvements that they made.”

Each of the four parts of the Ring Cycle—Das Rheingold, Die Walküre, Siegfried and Götterdämmerung—requires actors to heavily rely on the machine when suspended in air as they climb the vertical structure or balance on one of its several shifting beams. Now that the set’s latest iteration comes with several new safety features, Goerke and Grimsley say they can experiment more with space and engage with the structure in new and visually breathtaking ways.

“It was encouraging this time around to have a fresh look at not just how we interact with the machine but how we’re also clarifying our relationships as well,” said Grimsley.

Beyond the gravity-defying feats that are expected from the actors, the unusual set piece also creates a unique challenge for performers by way of acoustics. A structure as large as this will no doubt create new sound barriers onstage, and the ways in which actors are suspended in air can influence their vocal choices. With these new variables in mind, Goerke came prepared: “One of the very first things that I check in any theater is the acoustics and how sound travels around the theater. Having been up there, I had to wander [the machine] and see what hard surfaces we have, how much space there is and how far upstage I am.”

What Goerke discovered is that structure encapsulates voices from where they stand, even when suspended in air.

“The machine ends up acting as an acoustic shell, which is kind of brilliant if you’re singing Wagner. When you are up in the air on it, you know if it’s going to help or hinder you and then make a decision as to how much focus, how much space you get around your voice. But I think that we’re really quite lucky with this machine because it does, in fact, act as a shell more often than not.”

As a Wagner veteran at the Met, Grimsley noted that he makes subconscious adjustments based on where he is situated on the massive structure.

“A lot of times it does act as a shell and that helps with a lot of scenes,” Grimsley said. “When you’re up on the second deck, though, I, as a singer, don’t miss anything behind me because the acoustics in the Met are so good. And I feel I get just a little boost being up there anyway because I’m shooting out over the orchestra instead of being so close and having to sort of wedge my way through the middle of them.”

While the machine still comes with its own unique set of physical demands, the structure creates new opportunities for Goerke, Grimsley and their colleagues to experiment with their characters on stage. “I find that it necessitates concentration on the characters and on their relationships,” Goerke explained. “And if you watch Game of Thrones, you’ll love this.” 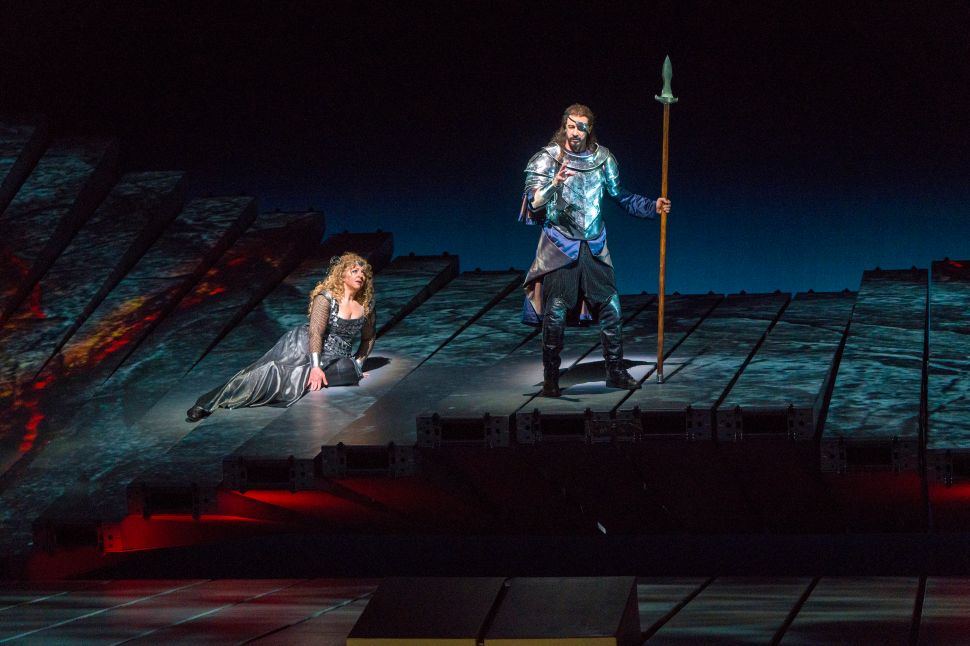