If there’s one thing Saturday afternoon’s Metropolitan Opera revival of Robert Lepage’s staging of Wagner’s Das Rheingold demonstrated, it’s that nobody involved has a clue what Das Rheingold is about.

To be fair, it’s a tricky question. The opera is not, strictly speaking, about gold from the Rhine, but rather about how the god Wotan commissions a big shiny magic castle with no clear idea of how he’s going to pay for it. (His first notion is to offer in trade his wife’s sister, though there are objections to that plan, chiefly from his wife and her sister.)

The only other wage the builders (a couple of giants) will accept is that magic titular Rhine Gold, but the hitch is that it doesn’t belong to Wotan. He has to steal the gold from the Nibelung Alberich, who in turn—earlier in the opera—has stolen it from its rightful owners.

Eventually, after two hours and change of plot complications, Wotan pays for the damn castle with his dirty money. (How dirty? Within five minutes one of the giants murders the other and transforms himself into a dragon.) The gods throw a flashy grand opening and parade into the castle over a rainbow.

But here’s the funny part: after all this double-dealing and theft and murder, the castle is useless. It’s just for show.

The one idea Wotan is kicking around is that it might make a cool dormitory for dead people he’s planning to re-animate if and when Alberich tries to storm the place. (That’s why it’s called “Valhalla,” meaning the Hall of the Slain.)

But even that plan fizzles: the next time we see Valhalla, at the very end of the four-opera Ring cycle of which Rheingold is only the first installment, the place burns up and falls out of the sky. All those warriors die (or re-die) in vain.

And so, in broader terms, what Rheingold is about is the folly of throwing untold amounts of money at a project that fails to accomplish its intended function.

Thus, it’s hardly a stretch to say that Wagner’s Rheingold is about Lepage’s Ring (or call it Peter Gelb’s Ring or the Met’s Ring): the tragic insanity of expending heroic effort on an enterprise doomed from the beginning to failure.

No, it doesn’t matter that at long last, after almost a decade of expensive retuning, the giant set piece nicknamed “the Machine” finally can do some of its specified tasks without either clanking like a demolition derby or simply, as it did at the premiere of the production, shutting down completely because of a computer glitch.

Even working at 100 percent of capacity, this production still utterly fails to recount the story in any vivid or exciting way. So far as interpretation or thematic point of view, forget about it. All we get is a gaggle of opera singers doing Tolkien cosplay while keeping their wary distance from the notoriously capricious set. About the only performers who dare to set foot on the Machine are stunt doubles.

A few of those singers created isolated impact through vocal power and sheer personality: debuting Tomasz Konieczny’s bass-baritone was one long snarl of outraged dignity as Alberich, creating a thrillingly ambiguous “villain.” The mezzo of Jamie Barton, not so much dramatic as vastly lyric, made the goddess Fricka’s virtues of monogamy and chastity sound downright seductive.

The majesty of Wotan was suggested by Greer Grimsley’s weathered but still assertive voice—though his dignity was undercut by his Party City costume. Tenor Norbert Ernst (styled as Mr. Humphries from Are You Being Served? on his way to the Folsom Street Fair) made admirably expressive use of the text.

I liked the briskness and transparency of Philippe Jordan’s conducting (the leitmotifs pinged out with striking clarity) but the performance felt top-heavy, without much bass in the sound.

It’s a pity they had to put so much energy and passion into what is obviously a lost cause. 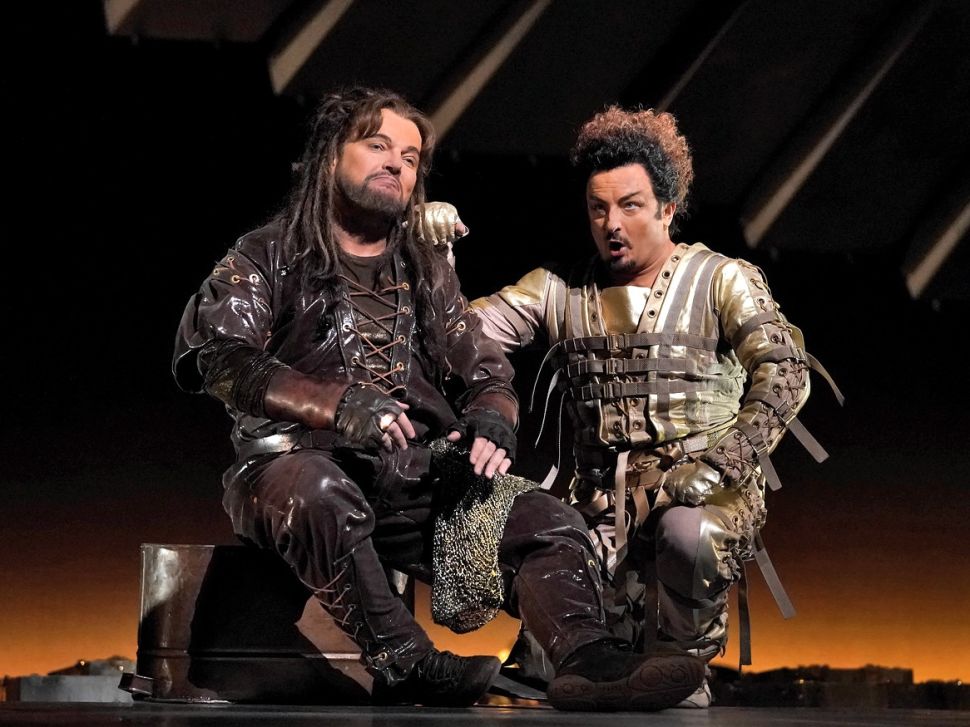