Steven Spielberg may or may not be marshaling forces against Netflix. The Academy may or may not have awarded Green Book Best Picture as a slight to the streamer’s unanimously praised Roma. A handful of power players in Hollywood still dismiss direct-to-consumer platforms as secondary hubs of entertainment. But they’ll be on the wrong side of history.

Some of cinema’s greatest filmmakers are flocking to the world of streaming, tempted by its deep pockets and creative freedom (hello, Martin Scorsese). Roma didn’t need to win Best Picture for Netflix to make a powerful point about its place in the  industry—with an increasingly ambitious library of original shows and films, the service has already become arguably the No. 1 destination for entertainment. Adding directors David Fincher and Tim Miller’s new animated anthology series Love, Death & Robots to the mix just further underlines that fact.

The creative duo, who boast three Academy Award nominations between them, originally viewed the series—a collection of animated short stories that spans various genres including science fiction, fantasy, horror and comedy—as a film. But up against Hollywood’s risk-averse studios, they could never get a firm green light. Enter Netflix, which has emerged as a home for the kind of daring, left-field storytelling we rarely see in mainstream cinema.

“We got a ‘yes’ [from film studios] for a while here, a ‘yes’ for a while there, and then everybody starts on the whole ‘Yeah, but anthology, yeah, but anthology,’ and, you know, ‘Is it going to be confusing?’ And it’s like, why would a buffet be confusing?” Fincher told Observer at SXSW. “Why would it be confusing that you can have fruit or pancakes?  Really, streaming services are kind of the perfect place to do something like this, because, you know, these [shorts] are distractions. But they’re really detailed in their execution, and a lot of love and care went into it.”

Netflix offered Fincher and Miller the opportunity—and a ton of freedom—to breathe life into their vision, so it’s easy to see why they ultimately landed there. The partnership helped Love, Death & Robots truly take shape.

“People [watching Netflix] understand when you’re making something that’s seven minutes or 11 minutes long that it doesn’t have to have this kind of, you know, sweep to the arc of the story,” Fincher said. “William Goldman once said, ‘If somebody’s got to deliver a whole shitload of exposition, do it in a speeding car.’ It’s like this allowed us to be able to go, ‘Let’s just cut to the chase.'”

This is a sentiment shared by Miller, who explained: “It’s all meat and no fat. But the practical logistics is that [Miller’s 2016 film] Deadpool had just come out the weekend of, so what does David do? David calls and says, ‘OK, so we’re going to use your newfound popularity to get our anthology movie made,’ and then literally like two weeks after that he said, ‘Fuck the movie stuff, let’s just take it to Netflix, because they’ll let us do whatever we want.’ And here we are.”

Fincher serves as an executive producer on the series, while Miller is a writer, director and executive producer. Miller was the driving force behind finding the stories that would form the basis of the show’s 18 shorts, which derive from a vast array of source material.

Netflix was an intoxicating draw for the duo, and the result of their collaboration with the streaming giant is a wholly original visual feast—one fans can finally enjoy when Love, Death & Robots hits the streamer on Friday March 15. 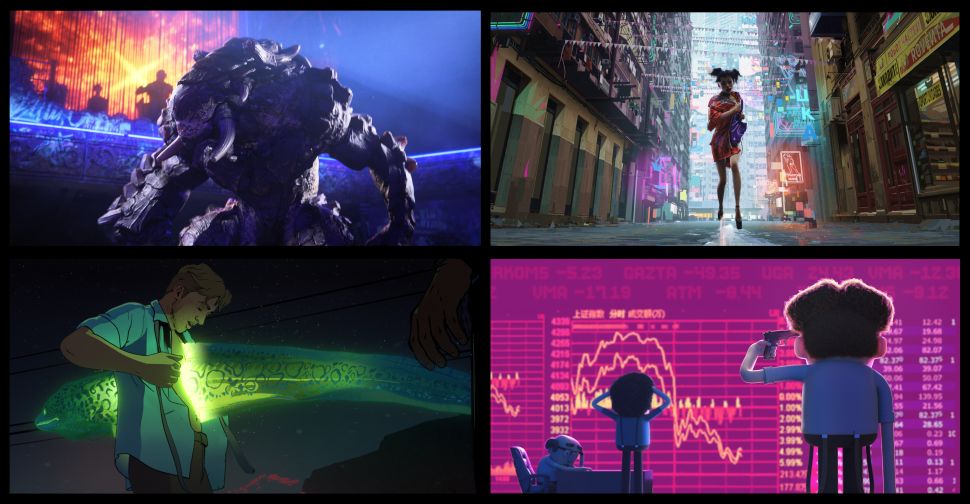