The second installment of Wagner’s Ring cycle, Die Walküre, is unusual among the operatic repertoire not only for its great length and mythic content, but also because it boasts two starring roles for dramatic soprano: Brünnhilde, the eponymous Valkyrie, and her mortal half-sister, Sieglinde.

At last night’s season premiere of the massive work (over five hours!), the casting seemed downright paradoxical. Although both divas were in only mediocre form vocally, one of them astonished while the other fizzled.

To begin with the more successful performance: Eva-Maria Westbroek (Sieglinde) was in as rough voice as she was in the fall in La Fanciulla del West, wobbling and falling below pitch on anything even moderately high.

And yet she was transfixing: her face, her stance, even the line of her body as her character lay unconscious—all echoing the noble desperation of her vocal cries. This was the stuff of high tragedy.

Beside her, the Brünnhilde of Christine Goerke felt unformed, even trivial. She was not so much feral as petulant; even after the character’s life-changing second act epiphany, she seemed merely sorry for herself.

Not only does she share Westbroek’s pitch problems, she exacerbates this issue with choppy, note-by-note singing. Low phrases sounded massive and organ-like, but as the voice ascended, she seemed to have a different placement for every note of the scale.

She was frankly a letdown in what was otherwise a superb cast: Stuart Skelton (Siegmund) and Günther Groissböck (Hunding) lavished on their warrior roles legato and sheer beauty of tone suitable for the most voluptuous bel canto confections, while pointing their words with chilling intensity.

As Fricka, goddess of marriage, mezzo Jamie Barton not only looked regally chic in a flowing gown of peacock chiffon, she laid out her case in such delicious honeyed tones that monogamy sounded downright sexy.

Yet even she took a back seat to Greer Grimsley’s Wotan. The veteran artist may have a trace of gravel here and there in his big, dark bass-baritone, but every phrase and every dramatic gesture proceeds organically from his vast experience in this role.

More to the point, he knows and feels both the character and the dramatic situation so well that he held the audience spellbound during Wotan’s long second act narrative—despite the distraction of video “flashbacks” projected into what looked like the Eye of Sauron in Robert Lepage’s dumbed-down production.

Yes, the notorious “machine” seems to have been tamed, emitting only token clanks and groans this time around. Without that distraction you can more clearly hear the lithe, almost breathless conducting of Philippe Jordan.

And once Brünnhilde’s sisters make their entrance—Lepage has them cascading down a sort of giant teeter-totter—what a big-voiced and well-tuned group they are, particularly Wendy Bryn Harmer as a clarion (and perfectly pitched) Ortlinde. 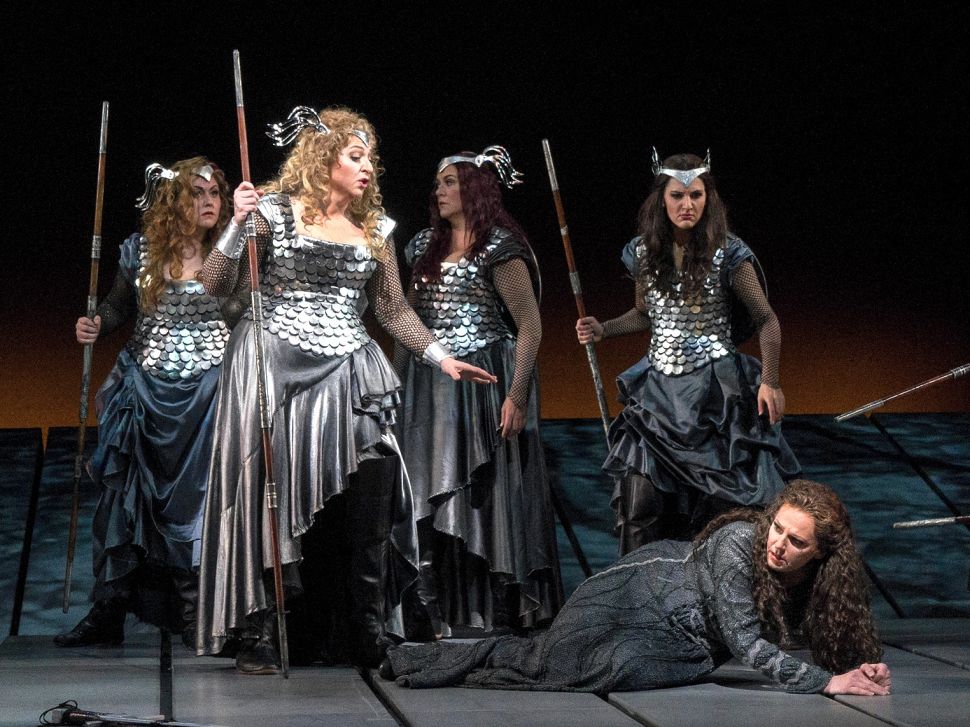