Driving through Lee County, Alabama last week was a sad moment—not just to see the devastation from the deadly tornadoes that hit earlier this month, but to also know that if recent politics are any indication, the victims can expect little government help, the result of partisan politics in which politicians seek to score political points at home by cutting or delaying aid to other states experiencing a disaster.

Shortly after visiting the devastation, President Donald Trump promised an “A Plus Treatment” for the people of the county affected. But that’s been said before. As USA Today illustrates, Puerto Rico received similar assurances. “Our hearts are with you,” Trump promised after Hurricane Maria mashed the island. “Will be there to help!” But in the end, he wound up accusing the island of using disaster funds to pay off its debts, even after his own administration tried to tap into Hurricane Maria disaster relief funds to pay for his border wall.

Even though he toured the California wildfires (like Camp Fire) and insisted on assistance, he wound up using Twitter to bash local politicians for environmental mismanagement, even though much of the state’s forested areas are lands in federal hands.

Trump may be well-intentioned at first, but his pride is easily bruised by any criticism. He is also quick to listen to the media voices that tell him to use excuses not to pay for any aid, a combination of anti-government pundits (shrink government) and shrewd political schemers (why give to states that don’t vote for you?).

NIMBY, or “Not In My Back Yard,” is an old phrase used by politicians to resist a smelly sewage treatment facility, or a dangerous nuclear storage facility, or some infrastructure nobody seems to want. When it comes to storm relief, the new acronym is NITBY, or “Not In Their Back Yard.” Money to help victims of natural disasters is voted against because it’s going to someone else, far from the politician’s home.

In fact, 37 members of Congress voted against aid to areas affected by Hurricane Sandy, including politicians like Mike Pompeo, Jim Jordan and congressional officials from California, Alabama and Georgia, but any guesses on how they voted when disaster struck their state, or how they will vote when it gets to their neighborhood? Texas GOP senators voted against aid elsewhere, but any guesses as to how they voted when Hurricane Harvey showed up?

And yet one, Alabama Rep. Mo Brooks, kept the argument going. “People have to protect themselves from the risks of weather, particularly if they live in an area that is periodically hit by substantial storms,” Brooks, who opposed hurricane relief, said. Betcha he doesn’t oppose funds for Lee County in his state, especially if he continues his statewide ambition for higher office.

Oklahoma senators were criticized for voting against help for New Jersey after Hurricane Sandy, but demanding aid for their home state when tornadoes struck.

Cool Coolidge Could Be Quite Cold to Storm Survivors

One could trace this back to when the Red River flooded in North Dakota and Minnesota in the 1990s, and budget bean counters sought to make an example of the region by holding up funds. But there’s an earlier case, even more insidious: President Calvin Coolidge and the Mississippi Flood of 1927.

“Rain in biblical proportions fell from the sky through the winter. Then, in the spring, the waters began to rise…” wrote Stephen Ambrose for National Geographic. “And the rains came. They came in amounts never seen by any white man, before or since. They fell throughout the entire Mississippi River Valley, from the Appalachians to the Rockies. They caused widespread flooding that made 1927 the worst year ever in the Valley. More , more damage, more fear, more panic, more misery, more death by drowning that [sic] any American had seen before, or would again.”

Ambrose noted that the area affected was the size of New England, but disaster response was nonexistent. Someone emailing me after an earlier column of mine about the Lee County tornadoes praised Coolidge in his critique of my position, seeking government assistance for East Alabama and West Georgia.

“The Federal Government (and I use that term loosely) is less capable of getting anything done than that which should be done by the states,” the writer told me. “Calvin Coolidge, often derided as ‘silent Cal weaned on a pickle,’ knew what the Federal Government was capable of doing and what it should steer clear of. After the Mississippi flood of 1927, people clamored for federal aid and disaster relief. Coolidge simply said no. Relief had to come from states effected [sic]. Otherwise every time a disaster happened, the fed would be expected to rush in with assistance.”

As cold as Coolidge turning his back on the victims was, it did not compare to what he did next. “President Coolidge did nothing,” wrote Ambrose. “Despite pleas from governors and mayors and other officials in the flooded states, he refused to visit the area. The radio network NBC asked him to broadcast an appeal for relief funds on an historic nationwide hookup. He declined.”

Trump is certainly more engaged than Coolidge when it comes to disasters. But he’s still going to need to demonstrate a greater commitment to storm relief and FEMA, and prove to those affected by disaster (or those who might one day face such a nightmare scenario) that he can get the job done. 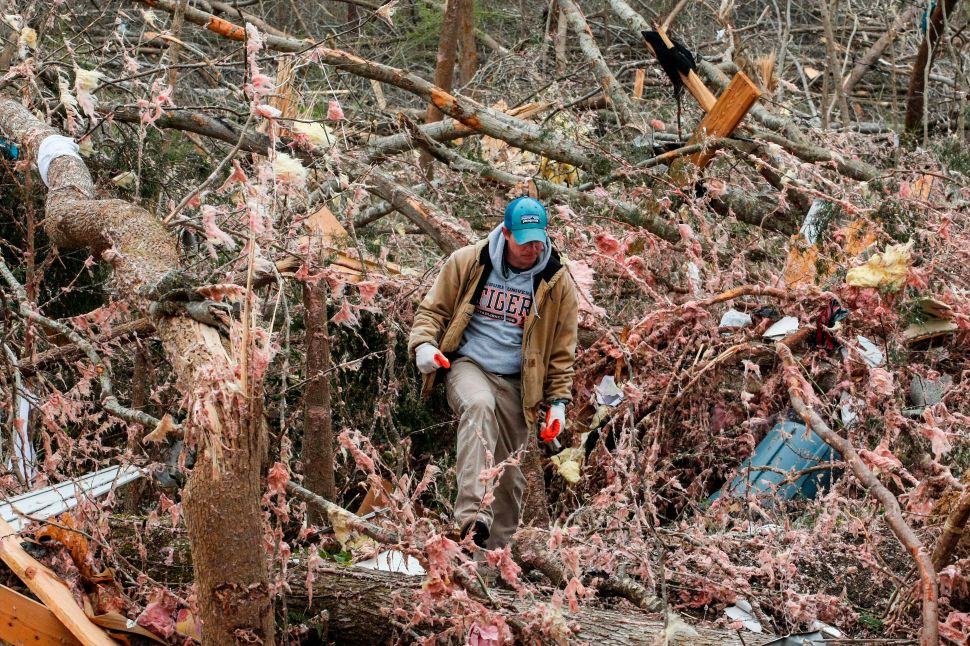