There were two significant developments in federal cannabis policy reform this week. You probably missed them and their significance, because individually, they were both relatively mundane and predictable events.

Together, in the current context, they mean that President Donald Trump is going to say, probably relatively soon, what he thinks about marijuana legalization. (Or at least a close-enough approximation of what he actually thinks, if he does ponder this at all.)

Considering that America’s great grease-trap president is an amoral empty shell, a dry and desolate landscape except for naked desire for the next big greasy win, there is every reason to think Trump will probably say he likes weed, or is at least OK with it.

Whatever. If you like weed and you don’t like the president, and if your sense of identity is wrapped up in either, this is probably something you should prepare for. This is also an altogether positive development, because it should force every major presidential candidate to actually have a coherent and nuanced position on this issue—which is exactly what drug policy has long required but politicians have thus been able to side-step.

The two developments that will cause Donald Trump to join the marijuana gravy train were a thing and the absence of a thing. The thing was a fundraising-slash-policy-manifesto email from Beto O’Rourke. Rather than challenging someone who tweets Mussolini quotes for a Senate seat, Beto is currently not running for president in the same way that carbon emissions are not altering climate patterns. Consistent with someone who might skateboard and also appreciate an upscale fast-food hamburger—while preparing to run for president—Beto declared that cannabis should probably not be illegal.

The other was Ohio Sen. Sherrod Brown’s announcement on Thursday that there was simply no room in the clown car of Democratic presidential candidates for a principled progressive populist who is also palatable with moderate liberals.

This means, as Vox helpfully pointed out on Tuesday, almost every Democratic candidate with a decent shot at winning the nomination supports marijuana legalization. (In this, Brown was the truly bizarre outlier, seeing as he represents a state where medical marijuana is legal but so scarce thanks to burdensome regulations that his constituents are risking arrest to go to Michigan to get some.)

This is a huge shift from the past few election cycles, when Hillary Clinton triangulated her way to an anodyne middle ground and Barack Obama reneged on a 2008 campaign promise and let federal drug warriors loose on state-legal medical cannabis. You must remember that Trump’s accidental stumble into the White House came courtesy a margin so thin that if it had a Slavic accent and heels, he would have declared it fuckable.

Thus, there is every logical reason to expect that Trump or someone on his team will grasp the obvious—or at least read the poll numbers, which clearly indicate that a wide majority of Americans think marijuana should be legal, a fact that is true across almost every divide there is in the country. This means “Donald Trump supports marijuana legalization” is a headline you will likely read sometime in the next year.

The other option would be to go hard against what a majority of voters want in some forlorn hope to shore up his base—maybe by resurrecting Anslinger-era tropes about jazz musicians and Mexican workers, because the tired line about kids and gateway drugs just doesn’t work anymore. While not impossible, this would be such an act of chaotic self-harm with no upside, it is hard to see even Team Trump trying it.

This is not to say that Donald Trump really thinks about cannabis, or gives a shit about it, because I don’t believe he does. It’s just not part of his Queens-to-Midtown worldview. There are many indications that Trump’s thinking, his understanding of his surroundings and what is in it, has remained largely unchanged since the 1980s.

If the New York Police Department had also used spurious marijuana charges to railroad the Central Park 5, maybe weed would have slipped on to Trump’s radar. But it didn’t and so he really doesn’t seem to think about it. The drugs coming in from Mexico are no longer cannabis, so the cruel white-supremacist nativist angle doesn’t apply. If anything, the random synapse in Trump’s flaccid french fry-fueled brain might fire and lead him to realize that Jeff Sessions didn’t like marijuana—and Trump does not remember his first attorney general fondly.

No, friends: Trump is going to be OK with pot. Someday, he or the very good boys who share his name may even try to brand and sell it. This may put you in the unfamiliar and—sorry, #Resistance—unenviable position of finding yourself in accord with Donald Trump. While uncomfortable, this territory is not unfamiliar. Plenty of awful people like things that are mostly good, including legal marijuana. Even Hunter Thompson allowed he had common ground with Richard Nixon beyond football. “We both wear belts,” he observed. “We both spend American money.” The realization that Donald Trump is possibly not wrong about everything is one you will have to come to eventually.

What this does above all is point out that it’s not longer notable or even interesting for a politician to say they like marijuana legalization. This statement is now banal. It is like saying they are for jobs or for peace or for making America great. Well, wow! No shit. But what does that mean? That is what reporters should be pushing Democratic candidates to elaborate on. Are they for regulations so bad they amount to capitalist wet dreams? Are they for guaranteeing the black and brown communities who sold white people weed for decades be allowed into the industry—or are they OK with licensing fees so obscene that only venture-backed fuckheads have a shot? This, not some vague litmus test pollsters realize will work with millennials, is what matters. 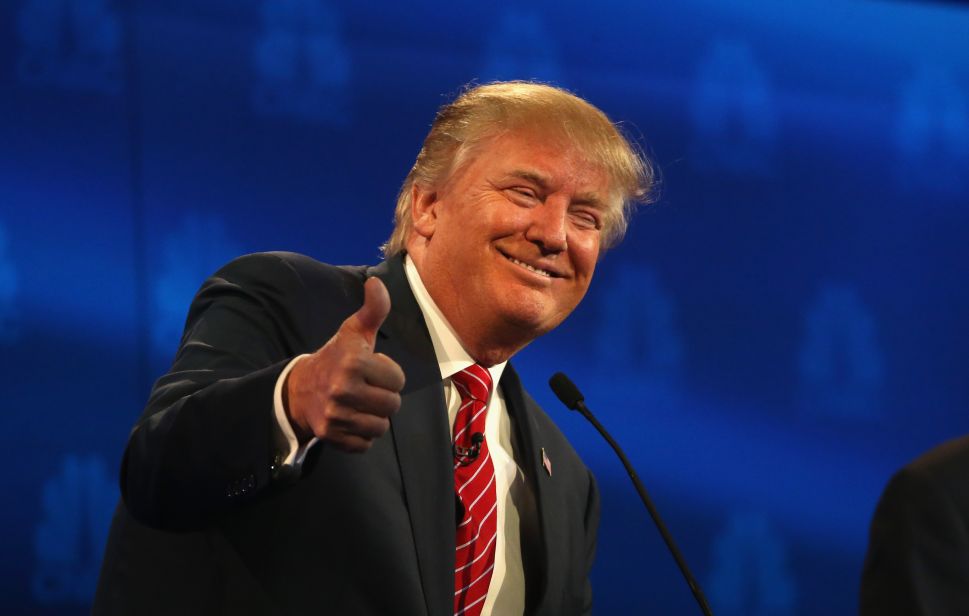