American Beauty, painted by Morris Hirshfield around 1942, is an oil painting, four feet in height, of a seated nude red-headed Venus holding a mirror to herself. Next to it, hanging on the wall at the Galerie St. Etienne, is a drawing on paper—same figure, same size—with marks suggesting where the drapery around her might be sewn together, as if in a dressmaker’s pattern.

Hirshfield (1872-1946) knew dress patterns. An immigrant from Poland, for years he ran a company that made garments. Without ever attending art school, he began painting at the age of 65.

Steps away from Hirshfield’s work in this exhibition, which celebrates the gallery’s 80th anniversary, are paintings by Grandma Moses (1860-1961), whose real name was Anna Mary Robertson Moses. Like Hirshfield and the other artists on view, Grandma Moses never went to art school. By the late 1940s, she was a household name.

Moses was introduced to the American public by the Austrian-born and newly-arrived refugee Otto Kallir (1894-1978) whose legacy (along with longevity of the business he created) is celebrated in the show, called “Looking for America.”

The show’s title came from Jane Kallir, 64, the dealer’s granddaughter, who became co-director of the gallery after Otto Kallir’s death in 1978.

“I was really thinking of the Simon and Garfunkel song,” she said, looking across the eighth-floor space on 57th Street that the gallery has occupied since 1960. Before that, it was in a brownstone, now torn down, on the same block.

“What I wanted to do was to take my grandfather’s search for an authentic American art and place it in a broader context of America constantly redefining itself, and the constant recalibration that goes on because of the differences between what we’d like to believe we are and what we really are,” she said.

The gallery is better-known to some for its other specialty, the works of Egon Schiele, Gustav Klimt and other Austrian artists of the early twentieth century. A show of Schiele works closed last week. (Otto Kallir compiled the first Schiele catalogue raisonne. Jane Kallir is author of the two most recent published versions, and a new updated edition online.)

With eight decades behind it, the gallery is a rarity in today’s art landscape of pop-ups, consolidations and, unfortunately, closures.

The secret? “To stay in business over what’s essentially two or two-and-a-half generations, at a certain point you have to have a generational shift, things don’t stay the same,” said Jane Kallir, surrounded by armies of young girls painted by Henry Darger. The Chicago artist was a janitor by day who worked in secret, creating paintings, drawings, collages and a 15,000-page novel about interplanetary war. The gallery represented Darger’s estate for five years from 1999 to 2004, after the artist’s “discovery” became a market sensation.

“Discovery,” says Kallir, is a “repugnant” notion. “It’s like Columbus ‘discovering’ America. The artist was there. America was there, albeit under a different name.”

“You have to be in a position as things change to remake yourself. If you look at the 80 years, it’s divided exactly 50-50—forty years my grandfather and forty years me,” she said, noting that she co-directed the gallery until last year with Hildegard Bachert, a refugee from Nazi Germany who began at the gallery as a volunteer, and who read the newspaper to Otto Kallir to help him learn English.

“What I perceived when I was coming into the gallery in the 1970s, when I was 24 years old, was that what had been a contemporary gallery was becoming historical or had already become historical,” she explained.

Not that there weren’t bumps along the way in the early days. Works by Schiele and Klimt, now unaffordable, were unsellable in 1939. The U.S. would soon be at war with the Nazis, who drove Otto Kallir out of Vienna.

Kallir was drawn to Americans like the self-taught John Kane (featured in the anniversary exhibition), to Hopi and Navajo weavings, and to the scenes of Grandma Moses. But some of his most beloved outsider practitioners were a hard sell, at times. Though they found popularity during the 1940s, that acclaim was envied by other mainstream artists, and many attacked the Carnegie Museum in Pittsburgh for showing the self-taught John Kane (1860-1934) because he painted over photographs, a practice which breaks no rules today. A 1943 Hirshfield show at MoMA enraged the same artists and emboldened museum trustees to demote MoMA’s director, Alfred Barr. MoMA and other institutions “dropped the ball,” Kallir said, and it took at least three decades for self-taught artists to show again at major museums.

Looking back, Jane Kallir said, “art dealing, for almost anyone, is a matter of trial and error to some extent. There are artists you might be attracted to, and they don’t do well, and you realize that there’s a reason you don’t do well.”

“Then there are artists whom you’re attracted to and they do exceedingly well,” she explained, “then there are artists you believe in fervently, as my grandfather did with the Austrians, and although he couldn’t sell them for the first 15 or 20 years that he was in the United States, he stuck with them, whereas other things kind of fell by the wayside.”

“What he made money on in those early years were French artists, when he could get them, the American ‘outsiders,’ and Grandma Moses,” she said.

“Imagine, for this refugee guy who scarcely spoke English when he landed here, by 1945—by the time the war was over—she was the hottest artist in America.”

Eight decades later, Grandma Moses is still on the wall, and Jane Kallir is still arguing on behalf of artists like her. “A great self-taught artist is in no way different from a great trained artist,” she said. “They work, not in exactly identical ways, but in very similar ways, as they assimilate visual inputs and turn something that is not theirs to begin with into something that’s original.”

Update: And earlier version of this story incorrectly attributed an exhibition of work by artist John Kane that took place in the 1940s to the Museum of Modern Art in New York. It was held at the Carnegie Museum. 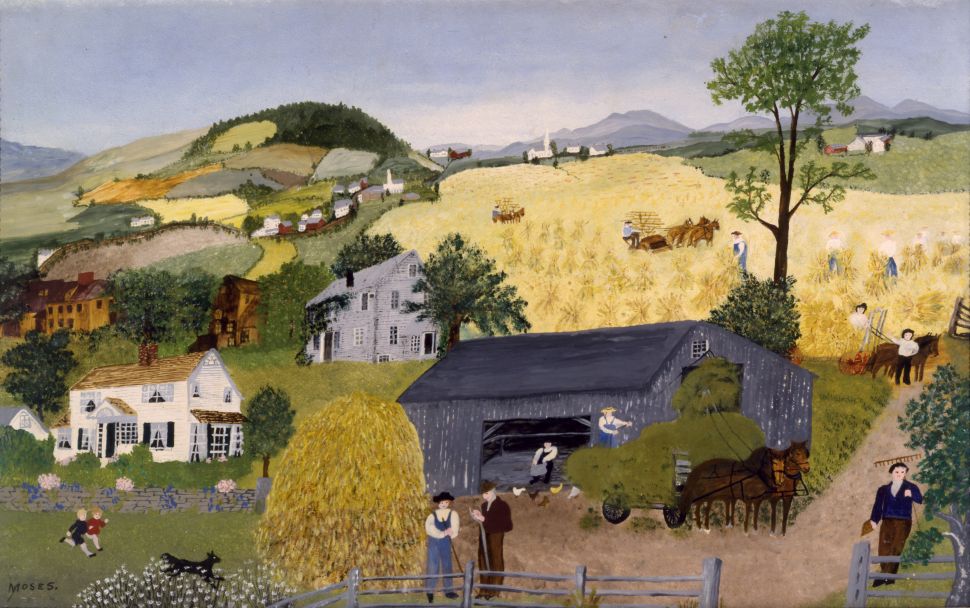