We’ve speculated and marveled and predicted and projected. Now, our time of uncertainty is coming to a close. The final season of HBO’s Game of Thrones is nearly upon us, and after months of clamoring from a hungry fan base, the first real trailer for the last new batch of episodes has arrived. The official Game of Thrones twitter released the footage Tuesday morning and, well, there’s a lot to unpack here.

The trailer is here. #GameofThrones pic.twitter.com/L48jOwsUzn

The trailer opens with Arya, bloodied and terrified, running through the halls of Winterfell. Who is she running from? Or is she running to warn someone? Spot that moving shadow running behind Arya at the 17-second mark? “I know death,” she says in a voiceover. “He’s got many faces. I look forward to seeing this one.” Shit is going down!

Then, Bran’s voice can be heard over shots of forces marshaling for both Stark and Lannister. “Everything you did brought you to where you are now,” he says. “Where you belong…home.” We see shots of Winterfell and King’s Landing—an obvious juxtaposition—flash across the screen. Bran and Sam figured out the truth regarding Jon’s parentage last time we saw them, so we’ll be waiting for those two to break the news to the White Wolf this season. That’ll make for some awwwkwardness between him and Dany.

We’ve got Cersei smiling maniacally (twice actually) and the combined strength of Daenerys and Jon. Chills. Pure chills. (It looks like Cersei has indeed brought the Golden Company into the fray as well. Fingers crossed they don’t try to shoehorn Young Griff into the final story.)

And it wouldn’t be a GoT trailer without some dragons. Drogon and Rhaegal look particularly menacing, though we can’t help but continue to mourn the loss of Viserion, who now flies as a resurrected weapon of the Night King. Speaking of…

“They’re coming,” Jon says in his patented dour northern accent. (Gotta love that brooding King in the North. )”Our enemy doesn’t tire. Doesn’t stop. Doesn’t feel,” he intones ominously as we see scattered shots of action, presumably at Winterfell’s big battle (the longest in cinematic history, FYI). By the way, we get a brief glimpse of Gendry in this trailer and he may be the only living smith who knows how to rework Valyrian steel. Just sayin’.

Jon and Dany are in the Winterfell crypts, which is a sight to behold for fans of Westerosi history. It’s a sacred Stark burial ground, so the inclusion of not one, but two Targaryens is just a hoot for all sorts of reasons. We expect Jon to learn the truth of his lineage somewhere in this sequence.

Tormund and Beric Dondarrion are confirmed to have survived the Night King’s attack on the Wall from the Season 7 finale, along with acting Lord Commander of the Night’s Watch, Dolores Edd. That’s a nice little update. Elsewhere, it’s intriguing to see the culture clash going on at Winterfell—Northerners, Wildlings, Dothraki and Unsullied all under one roof? That should be the next Game of Thrones spinoff (if we get one!).

Jaime then declares he “promised to fight with the living” and that he intends “to keep that promise.” This must be where he makes his case for inclusion in the army instead of, you know, letting the Starks behead him. His split from Cersei is the last major hurdle of his character development, and he is fully committed to the good guys now.

More dragon flights; Dany and Jon approach them with determined looks on their faces, which absolutely screams to us that Jon is about to ride Rhaegal—who is named after his father incidentally. (Could they be riding North to the kingdom of the dead, which we first saw in Season 4’s “Oathkeeper”? There’s speculation the conflict could be resolved there in some manner). Then we have Arya doing some cool flippy action, Tyrion looking skyward pensively and the Night King approaching the army of the living. 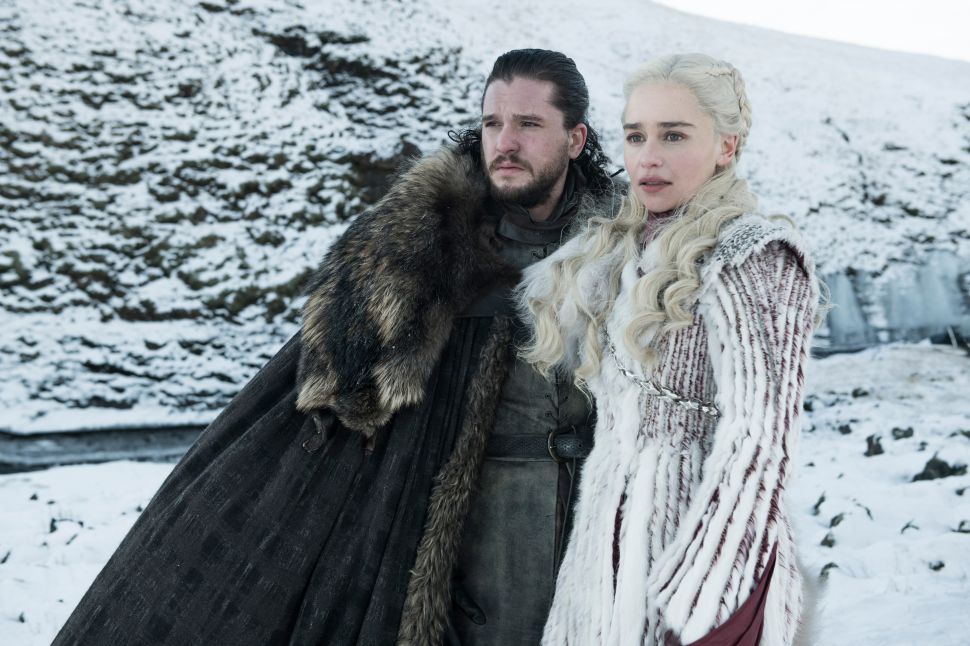