Gloria Bell is Chilean writer-director Sebastián Lelio’s unnecessary remake of his Spanish-language film Gloria (2013), but this time the story is transported from Santiago to Los Angeles in English with the enchanting Julianne Moore (who also executive produced) in the role of a middle-aged woman, divorced for 12 years with an ex-husband who is remarried and two grown children who barely show any interest in their mother at all.

It’s a sad, down-market tale of loneliness and survival for women over 50, but the star is radiant throughout. Good as she is, I still wonder if she’s the right actress for the role. Hard to believe Moore, even hiding behind oversize horn-rimmed glasses, is forced to go it alone against her will, in Los Angeles or anywhere else.

Gloria is an insurance adjuster who works all day, drives around singing along with cheesy pop tunes on her car radio, comes home at night to a lonely glass of wine, and spends her empty nights in bars and discos looking for guys to dance with, sometimes going home with strangers she never sees again. Her kids are poor company who do nothing to alleviate her boredom.

Her son, Peter (Michael Cera), has a new baby and a disenchanted wife who disappears for long stretches trying to “find herself,” and her daughter, Anne (Caren Pistorius), is a yoga instructor who is moving to Sweden to live with her surfer boyfriend. Sometimes Gloria lunches with her self-centered mother (Holland Taylor), and sometimes she confides in her married gal pal Vicky (Rita Wilson). But happiness is something that successfully eludes her.

One night on a bar stool she meets Arnold (John Turturro), also divorced and looking for a new start. A relationship starts to build, in and out of bed, that shows signs of changing Gloria’s situation at last. But Arnold is shy and awkward, with no social skills and a cell phone that rings at the most embarrassing moments with frantic calls from his two daughters and domineering ex-wife, all of whom treat him like a spineless, easily manipulated jellyfish.

In one emotionally explosive scene, Gloria brings him along to a dinner to meet her own family, and Arnold is so passive and out of place that he disappears without saying goodbye. Trying again to pick up the pieces, the couple takes a promising romantic weekend trip to Las Vegas so disastrous that Gloria ends up alone again. Finally realizing Arnold is emotionally inaccessible, a hopeless case and something of a heel, Gloria returns to her single life of desperation and struggle, this time reconciled to the unsettling fact that she must learn to live on her own terms, confront life’s mortal coil with forced resolve and accept loneliness as inevitable.

It’s a sad, bittersweet finale with a lesson that will leave many of today’s female overachievers skeptical and unmoved, but Moore carries it off with her usual naturalism and warmth (not to mention an excessive amount of total nudity). Structurally and thematically, it’s nothing special or surprising as a movie, but it gives off good vibes. For a film about a woman too young to give up and too old to start over, Gloria Bell could also face the challenge of finding commercial success. But to miss it would be a shame, because you won’t find a more spellbinding performance than the inimitable star in the title role. 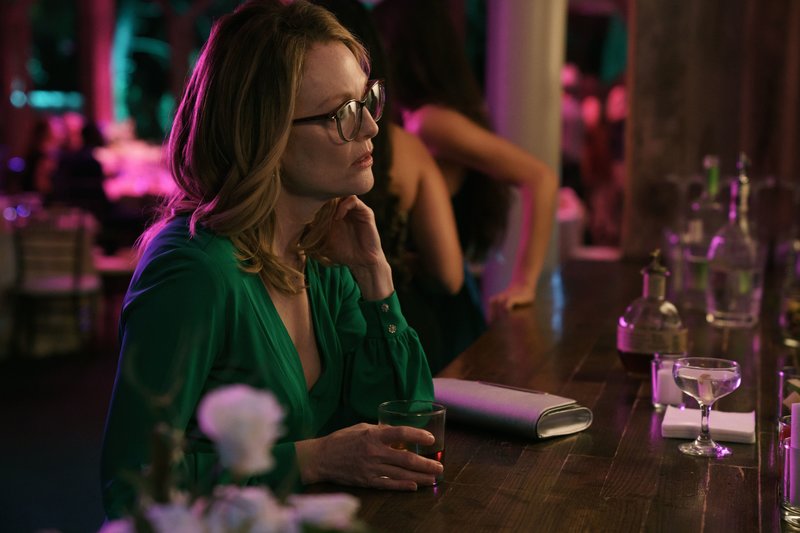