Public art rarely comes without friction; it’s always too expensive, too ugly, too disruptive to the actual, lived choreography of a place. And yet the initial ire directed at the Vessel—a gleaming, 150-foot tall structure whose elaborate stairwells rise above the landscape of Hudson Yards—was operatic by the usual standards. The Guardian dubbed it “a 15-story high answer to the question: ‘How much money could a rich man waste building a climbable version of an M.C. Escher drawing?'” It was tough to know what to actually make of the copper-colored eruption that—given the ongoing debates around hypergentrification and corporate tax breaks, from Amazon to Hudson Yards—somehow became a recognizable symbol of all those ills. It’s a big burden for any single reflective, sculpture-adjacent thing to carry.

The Vessel opened to the public this past weekend, with ribbon-cutting cameos from both Chuck Schumer and Big Bird. Prospective visitors can sign up for free tickets online—a logistical hurdle meant to stave off lines and keep capacity to no more than 700 climbers at a time. While some have cheekily compared the structure to a shawarma, its closest public-art cousin is Anish Kapoor’s Cloud Gate in Chicago, which proved that the thing people most love to do is take pictures of themselves. The Vessel feeds that same selfie impulse, but does it one better—providing a little exercise, and a lot of sweeping views of the surrounding neighborhood.

Of course, “neighborhood” isn’t the right word. Hudson Yards isn’t one, in any sense of the word—it’s a mall, augmented with luxury housing units and a sci-fi-inflected arts center known as the Shed. (The homegrown simplicity of all these names seems engineered to offset the development’s own focus on the 1 percent.) And while it’s not quite fair to judge the Vessel by the baggage that Hudson Yards brings with it, it’s also impossible to divorce the work from that context. The structure’s $150 million price tag may have been paid with private money, but the Vessel is still, inevitably, a top-of-the-funnel lure: Come for the free public art; stay for Tiffany’s and Louis Vuitton.

Unsurprisingly, the project’s creators—Heatherwick Studio of London—didn’t have shawarma in mind when they conceived of the Vessel. They weren’t even thinking of M.C. Escher, according to Heatherwick’s group leader Stuart Wood. What inspired them were performative spaces, he said—amphitheaters, or theaters-in-the-round—as well as subterranean stepwells in India. Wood calls the Vessel an “intensely social piece of three-dimensional public space” that’s meant to be “open to interpretation and use.” Even the name is just a placeholder; Related, the real-estate company behind Hudson Yards, plans to consult with the public over the coming months to arrive at a more organic moniker.

Wood imagines ample opportunities for the space; as its name suggests, it’s a sort of curious receptacle meant to filled with…stuff. He spitballs some hypothetical future uses: yoga on the platforms, or performances staged within the Vessel’s interior (or on the surrounding plaza, with audiences watching from the stairwells and terraces). Mentioning the popularity of weddings on the nearby High Line, Wood jokingly proposes a vision that is one part Escher and one part Bosch: “The Vessel could have 80 simultaneous weddings or bar mitzvahs, bat mitzvahs, who knows…” As for criticism of the project and its cost, he defends the Vessel as a public good. “It doesn’t cost you anything to go on it,” he says. “It doesn’t sell you anything when you’re on it. That speaks volumes about its intent. Whether people do or don’t like the rest of Hudson Yards is, in a way, their own business—they’re welcome to their own opinion.”

This past Monday—a brisk, clear day in Manhattan—the handful of Vessel visitors I spoke to seemed heartened by the experience. John Schiller, a photographer from Pittsburgh, said he spent about two hours exploring the structure with his wife, Denise. “The architecture, and the sculpting, it’s just stunning,” John said. “Every level, every direction—and then also bringing in the other buildings around it…from a photographic point of view, it’s phenomenal.”

Retired dancer Roger Preston Smith, a New Yorker, admitted that he’d been a bit biased before his visit. “Most people have told me that it was a waste of time and money,” he said. Despite his initial hesitations (“I was kind of like…Why?”) Smith was won over. “It was so much more spectacular than I imagined….It’s also much easier than people think. I’m nearly 70 and I had no trouble at all going all the way to the top. You’re just suddenly there: Wow, how did that happen?”

All this was an appetizer for my own ascent. Before tackling the Vessel, I also spent a while ambling around the nearby shopping complex, which is an upscale version of nothing special. The rhythm of stores—Uniqlo, Neiman Marcus, the horror show known as Avant Gallery—is punctuated by mural-style installations by Will Cotton, Francesco Clemente, Jeanette Hayes and other artists. The familiar architecture of the mall, its escalators and vague sense of claustrophobia, put me in a certain headspace. And so when I finally entered the Vessel, it was difficult not to interpret its own structure as a deconstructed mall itself: staircases without the shops, but with scenic overlooks, and a breeze.

“One of the things that perhaps we’d underestimated is the photogenic nature of the project,” Wood told me. Heatherwick Studio, amusingly, hadn’t foreseen the full extent of “the appetite to document,” which indeed is what most of my fellow Vesselites were doing. The ground floor of the Vessel sports a circle of glowing, sub-surface lights; placing one’s iPhone in this exact spot, for instance, allows for a pristine, straight-up selfie. “Clearly that’s the view that everyone wants to capture for their Instagram accounts,” Wood said. “It was quite hilarious to see people queing up to take that photograph before they go up—we hadn’t anticipated that.” (The effect from above is actually unnerving, as if a small mob of people had suddenly decided to gather around and worship a particularly miraculous phone.)

I sincerely wanted to enjoy the Vessel, but obstacles were in my way. For instance: In my new role as an aging grump, I had deleted my Instagram account. And while it might aspire to be a meeting place or an experience, it’s hard not to see the Vessel as mainly a series of intriguing vantage points. The interior view—the one that has led to the M.C. Escher and beehive comparisons—is busy and gently confounding; likewise the views of New Jersey across the Hudson River. And yet the Vessel’s 150-foot height isn’t monumental enough to inspire proper awe (just wait until Hudson Yards’ 1100-foot Observation Deck opens).

It’s hard to love an experience that basically exists for photographic purposes. Beyond that, the actual pedestrian sensation of the Vessel is…well…pedestrian. This was in some ways the point. While Wood said the structure’s armature partially refers to the “heroic bridges” of Manhattan, its beneath-foot interior is quieter. “The material palette has a strong New York flavor to most of it,” he explained. “The paving stones are very straightforward, concrete pavers—like a piece of street. That was absolutely intentional—to be honest, concrete, [a] rough-and-tough streetscape….Once you get on the project you’re almost comforted by the normalcy of concrete and glass and steel handrails.”

There’s a thin line between comfort and boredom, of course. And if you’re not using your time here to achieve the perfect selfie, the experience can feel oddly empty. I remember an afternoon I once spent in a Moscow mall, hiding out from the rain. I was struck by the number of wedding parties that were wandering around, smiling brides and grooms mugging in front of luxury shops and advertisements. (What I had assumed was a depressing plan-B due to inclimate weather turned out to be something else—a happy habit of soon-to-be-betrothed, commerce-obsessed Russians.) The Vessel felt a bit like that afternoon. There aren’t any obvious status markers around—if one doesn’t count the looming Neiman Marcus signage, or the luxury apartment buildings themselves, that is. But this “three-dimensional public space” left me cold. At least the High Line, with all its crowds, can get you from point A to point B. The Vessel brings you up, and up and up, but the experience falls far short of transcendence. 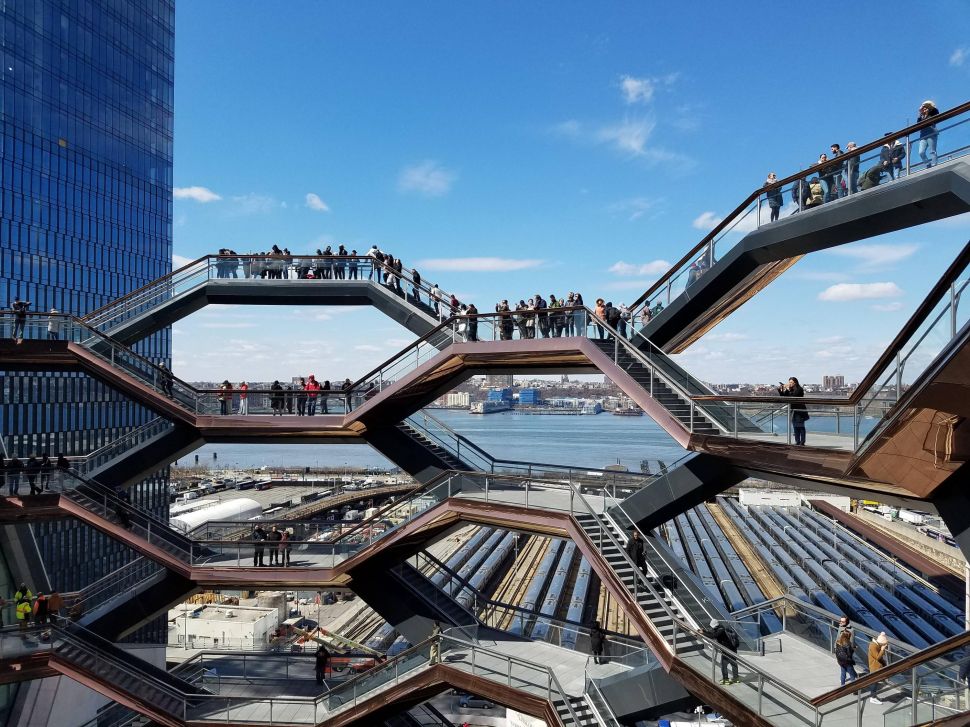