On a recent Saturday night at the Copacabana club just north of Times Square, buff male strippers ripped off their outfits, from cop to military uniforms, down to their skivvies, g-strings or thongs, in front of a shrieking female audience. Hunk-O-Mania, as the show is called, is an interactive male strip show geared toward female audiences. It was created 21 years ago by retired stripper Armand Peri and now operates in 19 U.S. cities.

As throbbing hip-hop played and the club’s overhead disco balls swirled, various women sat in the “hot seat” on stage during strip routines. They were theatrically straddled, adored or gyrated against (it’s prearranged and costs extra) by scantily clad male strippers. Simultaneously, roving male strippers with physiques ranging from ripped bodybuilder to skinny and tattooed, even a long-haired Hozier look-alike, gave lap dances to game women in the audience, some sporting tiaras, veils and sashes as Hunk-O-Mania is a popular engagement party outing. Friends screamed in hysterical delight, shoving bills down the strippers’ underwear or snapping photos; some women simply stared in disbelief, not accustom to the unfolding scene.

Peri remains passionate about Hunk-O-Mania 21 years later and is an involved owner, answering phones and working behind the scenes. He never dreamed his company would become a multi-million dollar business. Originally from a small town outside Porto, Portugal, Peri described Hunk-O-Mania’s evolution, the female gaze and the stigma of stripping.

First, describe the Hunk-O-Mania experience.
We’re a very interactive show; we’re not like Chippendales. My show is more like fitness guys doing a little bit of dancing, posing, walking around and really giving women the right kind of attention.

It’s been forever that men have had the opportunity to see similar shows, we’re here to provide a service for women. Hunk-O-Mania is an important outlet for women to enjoy being a woman.

Who are the male strippers? How much do they make?
We bring in guys who are professional fitness models, fashion models, we have guys in med school, we have a real cop, we have someone who works on Wall Street, musicians, actors, and they love it. It’s kind of like a dream job.

Can males sit in the audience of a Hunk-O-Mania show?
Our audience is predominantly women, we are very upfront about that, but if a male patron wants to attend—gay, straight—everyone is welcome to come in and have a great time.

You were a bodybuilder and stripper yourself?
Yes, my initial goal was to become a pro bodybuilder; I competed from the age of 17. I was winning, placing top five everywhere, becoming very well known, and I realized there wasn’t a lot of money in bodybuilding.

I was competing during college, and someone at school introduced me to the stripping business. It was a way for me to make extra money and stay in shape. It was petrifying the first time I went on stage, deep inside I was very shy.

Did you have fun despite the shyness?
I did. It was a great feeling hearing the girls scream, having them get excited. It makes you feel like you’re not an ugly duckling anymore, they don’t laugh at you anymore. When I first came to this country at 12-years-old, I was different, at times the girls in class would laugh at me.

So, I learned to feel comfortable on stage—you take one piece of clothing off at a time in a fun, exciting, entertaining way. The movie Conan the Barbarian with Arnold Schwarzenegger was out at that time, so I ended up doing a barbarian theme, I called myself “Armando the Barbarian.” [Laughs.]

It sounds like stripping was enjoyable and lucrative, why launch Hunk-O-Mania?
I saw a void in the nightlife industry. Plus, I got tired of working for shady people, driving three hours to a gig in Connecticut that’s not happening. Initially, when I first started Hunk-O-Mania, I did everything: the door, I was the MC, the host and the dancer.

It’s grown since then.
After meeting my second wife [Fran Peri] 14 years ago, I’ve expanded from just New York City to 19 cities. She’s given me a female point of view. Prior, it was only me and men making the decisions. But this is a business with a predominantly female audience, so she gives me insight and I tremendously value it.

There is an enormous amount of touching between the Hunk-O-Mania strippers and audience members, which can be tricky, no?
There are guidelines. I always remind the new guys, “This is not Funland, you’re here to work. So if you don’t follow the rules, you get fired.”

Has your business been impacted by the #MeToo movement in any way?
No, I don’t think so. For the most part, especially after a few drinks, the women are the ones who are more aggressive than the guys.

Do they grab?
Oh, yeah! The guys have to have a certain amount of tolerance. I tell them that if someone tries to grab your private parts, tell her that you can get fired, rather than, “You can’t do that!” because then she might get upset.

Do you think being an immigrant from Portugal influenced your career choices?
I was bullied when I came to this country as a kid; I didn’t even speak English. Back then, there was a much bigger gap between Europe and America, styles and fashion. I looked different, dressed different.

Looking back now, it really helped me become who I am. So the fact that I was bullied and laughed at was good for me, it made me stronger. I’m an immigrant kid who comes from nothing and created an empire.

Maybe it’s me, but why do I think a male strip show for women is celebratory and good fun, while a female strip show for men is kind of distasteful? Is there a double standard?
It’s less sexual for women. Women come in groups and it’s more like a comedy show. It’s an excuse to sort of get back at their husbands or boyfriends [laughs] and have a good time. Where as with men, it’s more of a sexual thing, and they don’t necessarily need to go with their friends.

How realistic is the male stripper movie Magic Mike?
I don’t think everything was 100 percent accurate. For example, if any of the Hunk-O-Mania strippers took drugs, like in the movie, they’d never last. You have to be physically fit. Nevertheless, I’m glad the movie shed light on the industry, brought it into the mainstream.

What about the stripper stigma in general, how do you explain the business to your suburban New Jersey community, the PTA?
They know what I do, I don’t hide it. They see my personal Facebook, and my wife occasionally posts things about the club. And her friends from the PTA? They actually went to the club and had a blast! If anyone has anything negative to think or say about me, that’s their problem, because I love what I do. 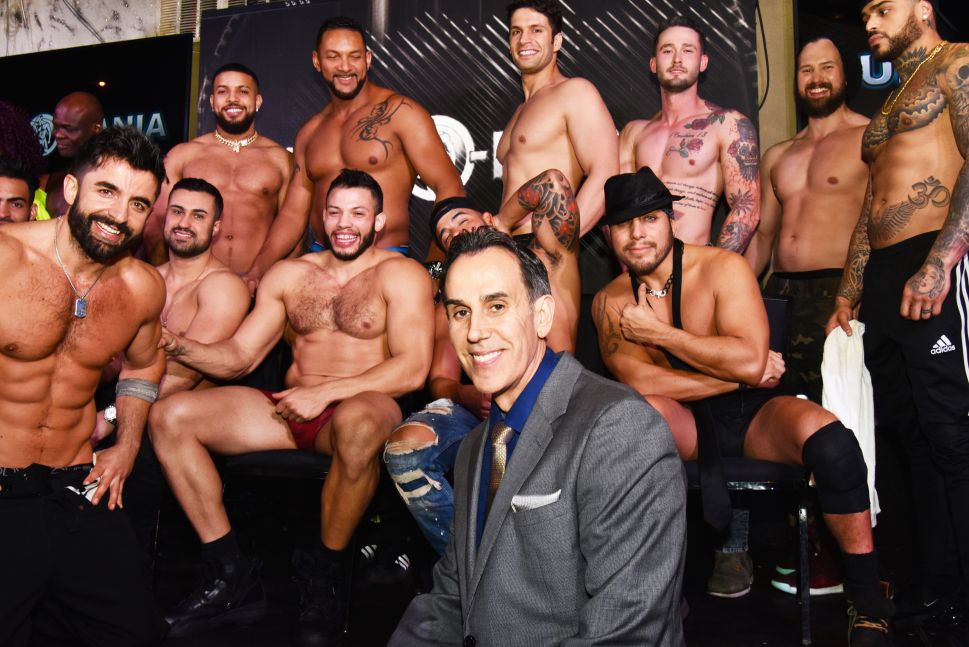