One of those earthy anthropological studies so familiar to viewers of the National Geographic channel, Iceman is a gritty caveman epic about the daily struggles for survival experienced by a Neanderthal named Kelab who lived 5,300 years ago. It is based on a real iceman called Ötzi, preserved in glacial ice and discovered in 1991 by hikers in the Austrian Alps.

The world’s oldest surviving “wet mummy,” Ötzi is now kept at minus 6 degrees in a museum in Bolzano where 250,000 visitors per year view him through a porthole. Scientists using DNA and other technology have pieced together who he was and what his life was like, and their findings form the basis of the film German writer-director Felix Randau calls Iceman. From a mythic premise, he has crafted a movie that holds interest with thrilling resolve.

The idea is nothing new. Movies about creatures from the evolutionary past have been made before, most memorably in 1984 by Australian director Fred Schepisi with the great Chinese-American actor John Lone as a cryogenically preserved body traced back to 40,000 years ago, not to mention the famous frozen sci-fi menace in Howard Hawks’ classic The Thing From Another World. But Kelab, played by the extraordinary German actor Jürgen Vogel, is shown in life before death and glacier preservation.

For his well-researched script, director Randau unearthed an early version of the Rhaetic language, which means you won’t understand a single word or sound in it, but it doesn’t matter. The action is so simple you get everything that happens just from the images, and sex is sex in any language. There’s plenty of that—and natural childbirth, too. Nothing that happens to any of these Neanderthals looks like much fun.

Crawling through their caves of mud and climbing steep boulders, they all look like they need a chiropractor. What they get instead is marauding savages from another tribe who drive stakes through the men, rape the women and burn the children alive. Kelab, who comes closest to a leading man, comes home from hunting for food, finds the remains of the slaughter, and spends the rest of the movie getting even. The nonstop blood and gore this retribution entails is relentlessly grim.

The film is so realistic and remote from any modern reality that you will never once imagine a catering truck parked nearby or makeup mirror for the actors to check their wounds. Kelab is quite a guy. He scoops up the tribe’s one surviving newborn and learns how to milk a goat. He meets a few friendly faces in the forest, including a young man from the killer tribe whose life he spares in a rare moment of compassion, a woman who nurtures the baby and a couple of savages humane enough to share a meal that looks alarmingly way beyond its shelf life.

But Kelab perseveres and pushes on in the direction of a horror-movie ending. No man or wild beast is safe from his bow and arrow, and he’s an ace when it comes to finding animal skins and fur coats to keep from freezing to death. One can imagine Richard Harris or Charlton Heston in the role, but without any star power, Vogel does quite nicely.

Beaten and battered by blizzards, hacking his way through ice floes, climbing frozen hills with his bare hands, Kelab is forced to show physical skills beyond those required of macho men in the usual Hollywood action flicks. It is not always clear what he’s doing or who he’s doing it with, but if nothing else, Vogel has stamina to spare. He has a rough time of it, and a hot shower is out of the question. So one wishes him a more comfortable film for his next assignment, like a drawing-room comedy. 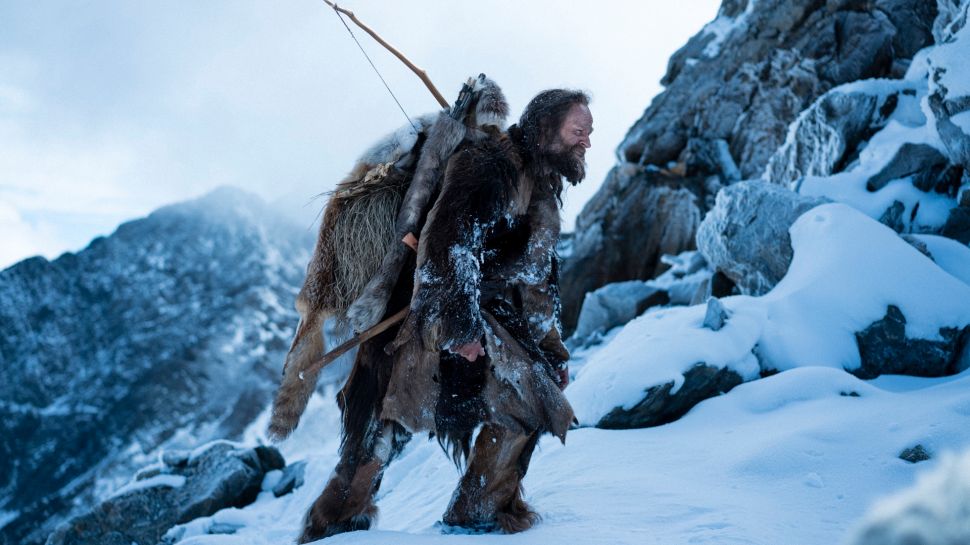