The grand literary tradition of finding out where writers go to get drunk is as self-perpetuating as a cyclical bender, followed by recovery time. The locations may change and the major players will eventually hand off their batons to a younger generation, but interest in “writer bars” is as much of a cultural certainty as a happy hour with your coworkers that ends up running just a little too late into the night.

“Literary tourism,” in my opinion, was a myth created and distributed by writers in the hopes that the public would be tricked into believing there’s a general interest in writer-adjacent ephemera. But if caring about what writers do and where they do it is a bit of a niche pastime, one thing is for sure: The watering holes associated with writers, both celebrated and more discreet, have an enduring, potent charm. There’s something life-affirming about thinking of the dimly lit pool halls that inspired great work, and I mean this entirely unironically. Certain writing is alienating, either because of its tone or because of the narrow audience it was written for. Bars, however, can be great equalizers (and, of course, the perfect place to procrastinate).

So on that note, here are six excellent “writer bars” that are well worth your time.

The consensus always seems to be shifting with Diamond Reef, which is located in Prospect Heights. It’s huge and somewhat impersonal, which has led some of my acquaintances to dismiss it witheringly. However, it’s also an indisputably perfect venue to host a joint birthday party if you need to accommodate two considerably large writerly friend groups.

The drinks are good and the backyard is notoriously cavernous; many a humid summer night there has been punctuated by regular puffs of Juul vapor slowly dissipating into the humid air. Here, you will rub elbows with too many friends of friends to keep track of, and you will get way too drunk—because, frankly, there isn’t quite enough seating, so the only thing to do is pace back and forth to the bar until you get tired. The criss-crossing twinkling lights, without question, are a sight for sore eyes.

One of those haunts you’re not supposed to write about because writing about it kills it (sorry!), Lucien is a French bistro on First Avenue and E. 1st St. that always seems to be bathed in naphtha-flare lighting and consistently packed to the gills with elegantly dressed people. Its walls bear evidence of its legacy: Pictures of famous actors share space with snaps of Jean-Luc Godard.

I once interviewed to be a hostess there, but it’s a high-stakes job, and I’m far more comfortable lurking, drinking and flirting while seated at the narrow bar. Denizens pointed me towards novelist Gary Indiana for comment on what makes Lucien both so comfortable and so intimidating, but Indiana was busy doing his taxes and politely declined to weigh in. This, too, seems indicative of the Lucien crowd: If you know, you know.

The media landscape is currently defined by the looming threat of layoffs, which makes for a discomfiting environment of low-grade anxiety that never abates, like a menacing Trent Reznor synth on a David Fincher soundtrack. Perhaps one of the darkest days in recent New York City memory was the simultaneous destruction of Gothamist and DNAInfo by billionaire owner Joe Ricketts, who shut down the sites in November 2017 after its employees successfully voted to unionize. DNAInfo and Gothamist staffers and their friends subsequently gathered at The Magician on Rivington and Essex to get fucked up and curse Ricketts into oblivion. The dive bar still lives in our hearts as a site of solidarity, hard-earned indignation and free-flowing liquor.

If Lucien is a space suited only for experts of barbed remarks looking to hone their banter, Caribbean-American barbecue joint-cum-cocktail bar Sally Roots is its disproportionately welcoming fraternal twin: cozy, accommodating and not at all concerned with putting on airs. Located in the liminal space between Ridgewood and Bushwick, this is the place to go to order generously priced cocktails with brunch (the tacos—God, the tacos!) and reveal a little bit too much about your personal life to someone with whom you’re friends on Twitter. The lush patio is ideal for long conversations laced with gossip about just how much money brutally incompetent columnists are making.

Tucked away on 13th Street between Sixth and Seventh Avenues, Spain is a place you pretend you’ve already been to when you’re invited there for the first time. Luis Marques and Julio Diaz, both in their 80s, opened the restaurant and bar together and act as the avatars of its namesake; the attitude of Spain lives and dies by their fluctuating degrees of prickliness.

The cuisine is loyal to the Galicia region, where the owners grew up, and the portions are fucking huge. I’ve spent evenings there saying little while surrounded by art critics way cooler than I am, covering up my shyness by scarfing down shrimp cocktail. Spain can best be summed up by freelance writer Chris Randle: “It’s like the hotel bar from The Shining, but sometimes they give you tapas.”

This is a space for dancing, imbibing, listening with rapt attention to a speaker holding forth and catching up with comrades whom you haven’t seen in months. Starr Bar announces its political proclivities with its inventive cocktail recipes. On one occasion I ordered the “TDKF (This Drink Kills Fascists)” because I couldn’t resist the name and then found myself laboring to swallow its jalapeño-infused tequila, hibiscus-infused simple syrup and fresh lime. This was my fault; I should have read the menu more closely and realized even a “lil’ spicy” would be too much for me. The talks I’ve had at Starr Bar with friends, best friends, crushes, former crushes and editors have all been burnished with a manic celestial glint. If you’re looking for a relaxing evening, stay at home with a craft brew. This is where shit gets done. 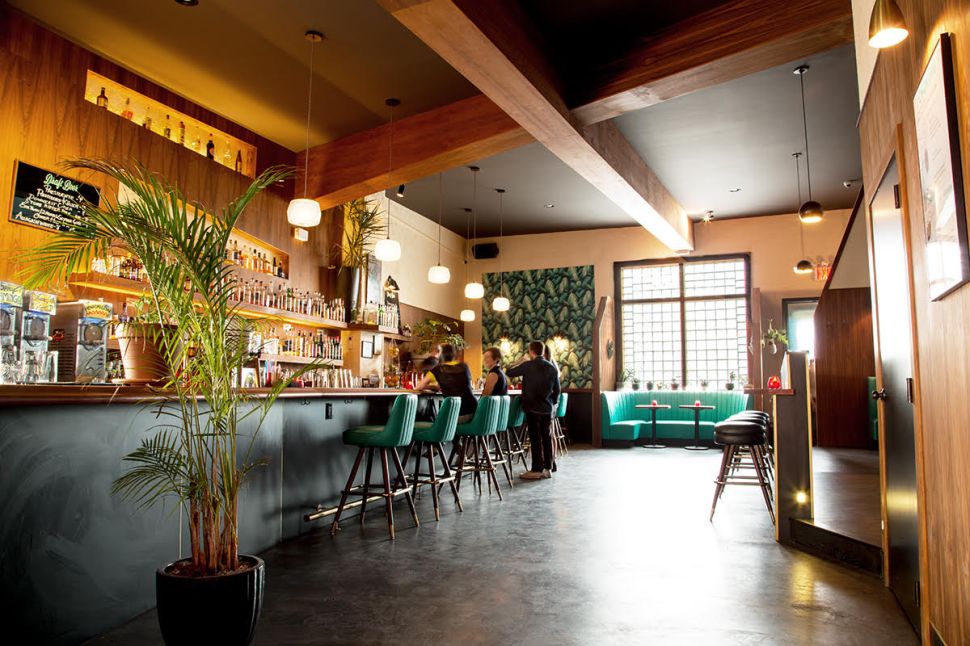