Rumors are swirling around that former Vice President Joe Biden—who has not officially announced his 2020 presidential candidacy… at least, not yet—is already considering an interesting choice for his own vice president: Georgia gubernatorial candidate Stacey Abrams. Does it show strength or weakness for Biden? Does Abrams really want to play second fiddle in this campaign? And does picking a running mate before the convention really help a candidate or not?

A History of Early VP Choices

This isn’t the first time a presidential candidate has considered picking his or her running mate so early in the contest. And the results have usually led to disaster for the candidates making such an early choice.

Ohio Senator Robert Taft toyed with selecting General Douglas MacArthur for his VP nominee, but the move backfired when Republicans made it clear that they liked the freewheeling army leader more than the crusty conservative legislator.

California Governor Ronald Reagan had a good race against President Gerald Ford, with enough delegates to prevent Ford from winning on the first ballot. Sensing he needed to appeal to moderates, Reagan chose Pennsylvania Senator Richard Schweiker, who had a rating of 89 from the liberal Americans for Democratic Action (ADA), only a few points lower than Walter Mondale, Jimmy Carter’s VP nominee. The move cost Reagan almost as many conservative Republicans as he won over from the moderate camp, and Ford won the nomination. Supporters of Reagan insist it wasn’t a mistake, but Schweiker was nowhere to be seen when Reagan ran again in 1980.

Another California Governor, Jerry Brown, sought to try and wrest the 1992 Democratic Party nomination from Arkansas Governor Bill Clinton. Fresh from his upset victory in Connecticut, Brown thought he could keep the momentum going by suggesting that Rev. Jesse Jackson would join his ticket. Brown must have forgotten that New York was the next big primary, and how poor of a reception Jackson received in the state for calling New York City “Hymietown.” Brown performed so poorly that he finished behind Massachusetts Senator Paul Tsongas, who had already suspended his campaign. Brown even lost his home state to Clinton in a landslide.

Finally, there was Texas Senator Ted Cruz. Trailing Donald Trump after winning the Iowa Caucus, Cruz considered adding ex-Hewlett-Packard and California Senate candidate Carly Fiorina to the ticket in the middle of March, when it might have made a difference with women. Instead, he dithered and waited until the end of April, when his loss was almost a foregone conclusion. She and her campaign faltered, literally, including this memorable moment when she fell off stage. Cruz dropped out seven days after picking her, nearly a third of the time Thomas Eagleton was on the ticket for George McGovern.

As interesting as a Biden-Abrams ticket is, it may not work as well as it appears on paper. There is some look of desperation on Biden’s part, as such an unorthodox early selection may reveal that he’s concerned about his electoral prospects. First of all, he may get ganged up on by progressives like Bernie Sanders and Elizabeth Warren in the primaries, and may feel the need to pick up Abrams supporters. Second, the same thing may happen when facing Cory Booker and Kamala Harris in the primaries, among African-Americans. Some of those 1980s votes on crime may come back to haunt Biden among an increasingly liberal Democratic Party. Moreover, some of those candidates like Beto O’Rourke and Peter Buttigieg are pretty young, and Biden is not. But Abrams is.

Moreover, there is some feeling among progressives that Stacey Abrams doesn’t need Joe Biden. Why should she play second fiddle to a candidate who has lost his last two presidential races (1988 and 2008)? Perhaps she could beat him in a primary!

Yet, many of these previous vice president situations are very different from the one Biden faces. Taft was a colorless character who made the mistake of picking a more likable running mate. Reagan picked his ideological opposite. Brown had the right idea, but the wrong candidate in the wrong state. Cruz’s pick smacked of last-minute desperation; after Iowa, it might have given Trump trouble with women and conservatives.

One factor that really works for Biden, which failed for others: timing of the pick. Rather than being a liability, an early selection can be an asset. It shows a strong level of decisiveness that Cruz lacked by waiting until the last minute to make his choice. Abrams is an exciting national pick, like General Douglas MacArthur would have been in 1952, but Biden, for all of his gaffes, is far more appealing nationwide than Robert Taft.

Also, Biden would be sacrificing the “surprise pick” before the convention that would build up hype, showing that a solid choice matters more than ratings in the summer of 2020. Biden may be a little more moderate than Abrams, but having met Abrams and attended one of her speeches, the two candidates are not worlds apart, like Reagan and Schweiker.

Having a vice presidential candidate named early reduces the uncertainty over who will be picked, giving voters a chance to know in the primaries who will represent both spots. Biden and Abrams can cover twice as much ground, and that’s not a small detail in a crowded campaign. Abrams proved to be a dynamic campaigner, and giving an effective response to Trump’s State of the Union Address proved she can handle prime time. She also came within an eyelash of winning a red state, having never run for statewide office before, against a statewide office holder. Such a ticket would have geographic balance (Delaware-Georgia), racial balance, age balance, some ideological balance (moderate-progressive) and gender balance, of course.

While history is against a premature pick, this particular team could break that trend, and possible set the tone for future campaigns. If a Biden-Abrams alliance is propelled to a commanding lead, we just might see Sanders, Warren, Harris, O’Rourke and others follow suit and make their own early selection. 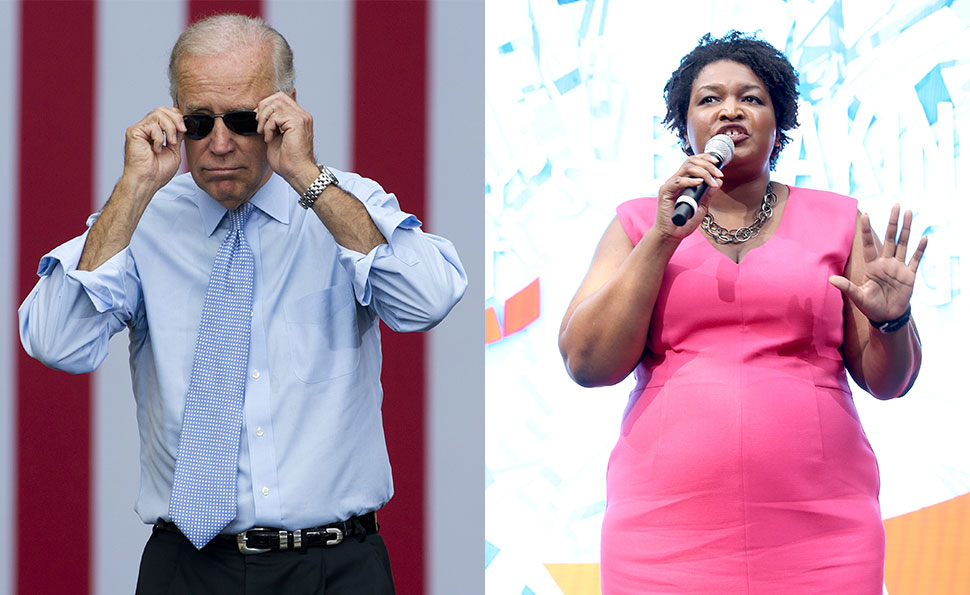