I don’t usually obsess over actors’ buttocks. My job is to evaluate the work, not anatomize the talent—much less ogle and rate their physical attributes. But here’s Kelli O’Hara and Will Chase in Kiss Me, Kate, putting the boot into each other’s gluteus maximus multiple times as the congenitally quarrelsome stage couple Lilli Vanessi and Fred Graham. Each gives as good as he or she gets. And we’re not talking dainty rump-punts; this is full-extension ass-kicking, over and over again. My own hindquarters began to throb in sympathy. Costume designer Jeff Mahshie must have sewn in heaps of padding, or else they keep buckets of ice in the dressing room.

The cause of said bum battering is, naturally, love. Fred and Lilli, divorced a year, have reunited for a musical version of The Taming of the Shrew, readying for its first out-of-town tryout in Baltimore one sweltering summer day in 1948. Lilli, who’s playing shrewish Katharine, got flowers from Fred—which were intended for ditsy ingénue Lois (Stephanie Styles). When, mid-scene, Lilli reads the card that came with the bouquet, the knockabout world of Shrew collides with the one onstage. Lilli is furious, breaking the fourth wall (and the fifth, sixth, and seventh, probably). Fred must tame his leading lady if the show is to go on…or is it she must tame him?

It’s a measure of how skillfully director Scott Ellis and book-tweaker Amanda Green navigate the antique attitudes of the material that we view the vicious scrapping of these ex-spouses as hilarious, not creepy or lopsided. In Kiss Me Kate 2019, there’s still plenty of trigger-worthy antics: workplace sexual impropriety, inappropriate double entendres, bullying—but you’d have to have a heart of snow not to find it utterly, deliriously fun. In the original, the first act ended with Fred snaring Lilli with a bullwhip, but here, it’s O’Hara who cracks the whip. And for Lilli’s reconciliation song, “I Am Ashamed That Women Are So Simple,” Green has judiciously substituted “people” for “women.” Such landscaping touches tilt the playing field to a more equitable level.

Not that Lilli, Fred and the rest need saving. These are show folk, after all, a breed hardened to humiliation, defeat and abuse. Their bodies and moods are their currency. The show must go on, no matter what reviews say. Showmances are part of the game. So are monster egos and temper tantrums. Of course, “that’s showbiz” doesn’t excuse gender bias or harassment, and Kiss Me, Kate—not to mention Shrew—carries plenty of laugh-killing misogyny and patriarchal baggage. This version softens the lady-bashing while not sacrificing the sexiness and humor.

Above all, it’s acted and staged with consummate style and grace. O’Hara’s angelic soprano navigates the quasi-bel-canto passages Cole Porter wrote for Lilli, not to mention salty comic numbers such as “I Hate Men.” Chase exudes the perfect oily charm and exasperated panic as the actor-producer who finds his show coming apart at the seams, as well as decency under the bluster and swagger. Charming Corbin Bleu returns to Studio 54 (after his scene-stealing turn in the otherwise bland Holiday Inn) as hoofer and inveterate gambler Bill Calhoun, and his tap routines are sensational. Overall, choreographer Warren Carlyle’s routines are spectacular, performed by a winning ensemble under veteran music-maker Paul Gemignani’s flawless baton. I had to check my program twice to confirm that Styles is making her Broadway debut; the petite comic powerhouse is poised to join the lineage of Peters, Chenoweth and Ashford.

John Pankow and Lance Coadie Williams have the small but unforgettable roles of two mobsters trying to collect on a gambling debt they mistakenly think Fred incurred. These wise guys warble the classic “pick-up-dames-by-quoting-poetry” number “Brush Up Your Shakespeare.” That novelty song, with its tortured rhymes with titles of Shakespeare’s plays, has been the gateway ditty for many a youth previously unfamiliar with Cole Porter. I hardly need to extol the smutty, nutty, indelible Porter score, with heaven-sent numbers such as “Too Darn Hot,” “Tom, Dick or Harry” and that deathless show-folk anthem, “Another Op’nin’, Another Show.”

Speaking of openings, a Tony Award side note. By end of April, there will have been just two musical revivals in the 2018-19 Broadway season: This and Oklahoma! Two Golden Age titles that opened five years apart from each other. Producers for both found distinct ways to make the male, white assumptions and prejudices of the material resonate in today’s world. Oklahoma! does it through subversion and distancing of musical-comedy tropes; Kiss Me, Kate through surgical cuts and rewrites, within a traditional framework. It will be an interesting Tony race.

Of course, you should see both. The Roundabout revival is so blissfully staged and packs such a delightful comic punch, it made me retroactively regret missing the last Kiss Me, Kate mounting, which ran on Broadway from 1999 to 2001 and starred the late, great Marin Mazzie opposite Brian Stokes Mitchell. That revival was praised to the skies. Then again, two decades ago was a different universe. We didn’t have Green’s elegant, sensitive emendations, and Bill Clinton’s sexual slapstick was barely in the nation’s rearview mirror. An outstanding revival makes you faintly nostalgic for an earlier time, but still very grateful to live (and love) in the present. In other words, a worthwhile revival needs a little kick. 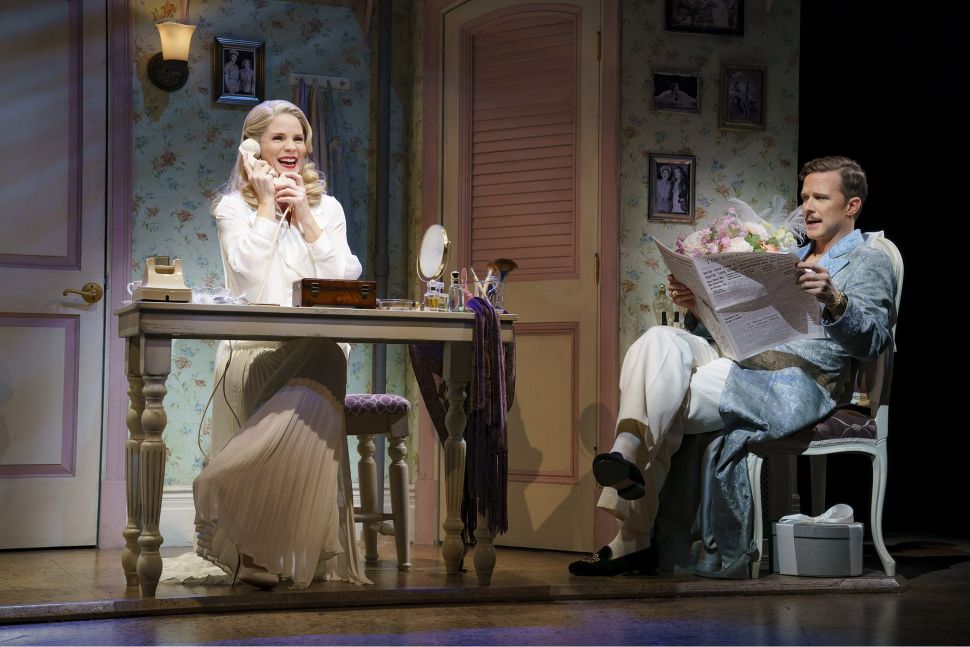