Though he lived a brief 34 years, artist Yves Klein’s life was so incredible that his story would be the least believable part if included in something like Velvet Buzzsaw. He was a world-class Japanese-trained judo master by age 26, an art world disruptor (helping to pave the way for Pop Art), and left the world a staggering number of amazing quotes. On his deathbed, for instance, he said, “I am going to go into the biggest studio in the world, and I will only do immaterial works.”

To celebrate the 90th anniversary of the artist’s birth, French paint manufacturer Ressource has partnered with the Yves Klein Archives to create and release a pigment that celebrates Klein’s most recognizable and widespread creation: International Klein Blue.

IKB is a shade of ultramarine blue that Klein developed and prolifically used to express the intangible and unnamable aspects of human existence that beguiled and fascinated him. In Klein’s words, “Blue has no proportion, it goes beyond proportion.” His hue is particular not only for the exact color, but the binding agent that gives the work a matte finish. Klein also registered the concoction as his invention under French law.

Ressource’s paint is $100 per liter, which comes with the required undercoat, and will cover about 85-square-feet of whatever you want to paint. Since this bucket-o-bonafide-IKB is sanctioned by no less an authority than the artist’s Archives, this presents do-it-yourselfers with an interesting opportunity to recreate their own favorite Yves Klein masterwork. Klein’s paintings are in the world’s best modern and contemporary art museums, and sell for six and seven digits on the open market. Below, we’ve included a few of his best, most expensive, and easiest to recreate works alongside some calculating to figure out how much it would cost to make them.

This rather large work is in the permanent collection of MoMA in New York, and therefore, priceless. The museum is never letting go of this piece and it is, therefore, unattainable for collectors of any income bracket. In Klein’s words, monochrome painting was an “open window to freedom, as the possibility of being immersed in the immeasurable existence of color.” At less than 29-and-a-half square-feet, “Blue Monochrome” would cost $34.71 of paint to recreate. Factor in about a half an hour to assemble and $50 for an affordable canvas and cheap paint brushes and you’re out the door for $84.71, you thrifty sophisticate.

Another monochrome that offers some perspective on the larger one above. This piece was sold in 2008 for $17.4 million at Sotheby’s New York. At 17.67 square-feet of space, it’ll take just $20.90 of Ressource’s pigment to recreate. The canvas being quite a bit smaller, plan a budget of around $60.

Klein’s philosophy was pretty deep, but the 10-cent description is that he was interested in the human condition. If your human condition is looking for a cheap date night activity with frisky implications, then recreating Anthropometrie Le Buffle (ANT 93) has you covered. The organic quality of this abstract mass comes from the fact that it was created by Klein smothering nude models in IKB and having them bounce against the canvas.

The canvas has an area of about 53.72 square-feet, and let’s be generous and say that two-thirds of it is covered. So, that should only require 35.78 square-feet of paint, for $42.10. Luckily your implement is your body, so that shouldn’t add any cost (unless, can you itemize that if you find a way to legally sell these?). However, a 110-inch canvas is kind of a specialty item and might cost upwards of $500. That’s not bad, considering the real Anthropometrie sold for close to $12.5 million in 2010 at Christie’s. If you’re doing this on a shoestring budget, then substitute the canvas for any kind of white material and you’ll have basically the same effect. Final cost to recreate will be variable based on whether you use canvas or substitute for something cheaper, so let’s say between $100 and $500.

Now we’re getting into something a little more involved. Klein’s early life was tied to the Mediterranean, and it’s clear skies and briny depths are thought to have been part of his lifelong affair with the color blue. Archisponge is part of his Sponge Relief series that plays into that nautical past. Klein sealed pigment and sponges under resin for his $21.4 million version of this. So, for recreation purposes, we’ll go over the one-hour version of the project. That requires a couple of natural sponges, Ressource’s IKB, a little bit of black pigment, some brushes, and a pretty large canvas. Put down a layer of the IKB, just like the monochrome works, dip the sponges in the IKB, and plop them down on the canvas to add their texture. Touch-up with the black, adding shadows around the sponges for volume and throughout the work to simulate that seafloor, pebble effect. At 35.52 square-feet, the cost of IKB pigment is $30.19 plus around $150 for the canvas and other materials. $180.19 out the door. 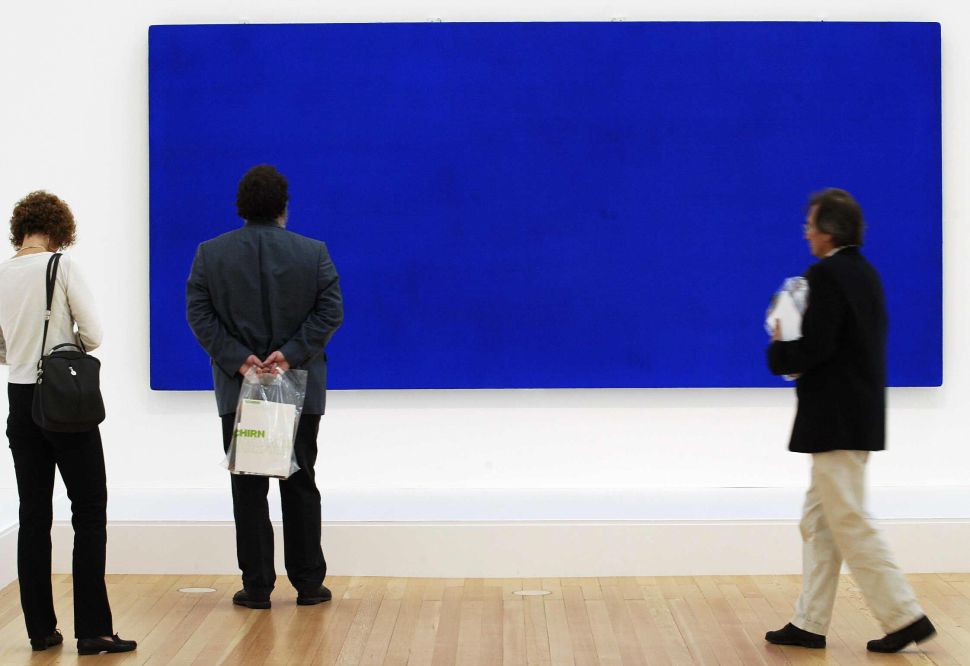