This year, feminist writer Lindy West spent International Women’s Day answering questions about Shrill, the new Hulu series based on her 2016 book. West developed the show with Elizabeth Banks, who executive produced it with her, and co-wrote the first season with its star Aidy Bryant. Using West’s work and life as a loose template, Shrill is the fictional tale of Annie (Bryant), a writer at a Portland alt-weekly whose boss (John Cameron Mitchell) underestimates her, whose mother (Julia Sweeney) tries to micromanage her diet and whose slacker boyfriend (Luka Jones) doesn’t deserve her.

“It’s not like she’s a mousy little wallflower—she’s someone with personal style and confidence, to a degree,” West says of Annie. “The whole point is to tell a story about a fat woman that is not the same as the stories we’ve heard a million times. This is not a weight-loss narrative. We wanted to show a woman who reacts with defiance and tries to figure out a new way to live in the body that she has.”

A week before all six episodes of Shrill were set to drop, West chatted with Observer about casting a version of herself for TV, “fat awakenings” and why she hopes her former boss Dan Savage watches the show.

Observer: Happy International Women’s Day! Have you had the opportunity to enjoy an Ariana Grande Cloud Macchiato today?
West: [Laughs] No, I have not. I don’t even know what that means!

She’s launched a coffee drink for Starbucks today.
Oh, my god, what is it? Do you have to be a woman to get it? Can men order it?

I don’t know. I didn’t do much research on it.
I am so intrigued. I’m going to go research it after this and let you know.

You’ve adapted your book of essays into a fictional TV show. How closely did you want the show to mirror your own life?
As much or as little as it would take to make the best possible TV show. I mean, I didn’t have any kind of precious, territorial feelings about making sure this was my life or my story. The idea was to make the best TV show we could make, and so some parts of it came from my life and some parts came from Aidy’s life. Obviously, once you’re in a writers’ room, it’s totally collaborative and you’re pulling from all kinds of people’s ideas and experiences.

Were you adamant about keeping or changing anything in particular?
There were some tentpoles from the book and from my life that I wanted to make sure were in there: the abortion, her dad being sick, having this contentious relationship with her boss. I think that’s really a catalyst for having to grow up a little bit, which is what Annie’s doing in the story. All of that carried through to the show, but we built a fictional world around those things. Annie isn’t me, and she’s not Aidy. She’s a new person we made in the service of making a great show.

How did you want Shrill to be different from other comedies on TV and streaming sites?
I didn’t sit down and compare our show to a bunch of other shows, but, just organically, it was really important to me to have true, meaningful diversity in the cast and in the writers’ room and in the crew—to make sure we really are making a show that isn’t just for straight white people. Selfishly, that’s not what I’m interested in watching, but also those stories have been told, and if I get to be in the lucky position of making a television show, I want to create the kind of show the future deserves—especially in this horrible Trump World.

Let’s talk about casting Annie. What was it like trying to find an actress to play a version of you?
Well… [Laughs] I mean, there aren’t a lot of options! Here’s the thing: Aidy was our first choice from the very beginning, and she would have been our first choice even if there was a field of hundreds of hilarious fat actresses. Aidy is magical and this is her moment and she’s a star. But, that said, there aren’t hundreds of hilarious fat actresses. There are five. So, the options were: Aidy—which was the ultimate dream—or probably casting an unknown. So, when Aidy reached out because she heard we were developing this project, I couldn’t believe that had happened!

I have no idea where the show would have gone if Aidy hadn’t been interested. We didn’t really have to go down that road. I would have loved to have broken the career of a young, struggling fat woman trying to make it in Hollywood. That would have been great too, but I’m happy with where we ended up.

I was surprised where we find Annie when the series begins. I think I expected a much more confident version of the character, someone living her life unapologetically. Why did you decide to show her blossoming?
I think a lot of times, especially since I started writing about being fat in general, people—other fat people especially—come to me and say, “I wish I could be confident like you.” And I wasn’t always confident. I had to go through the same process. You absolutely can be confident like me. It’s long and slow and hard, but you’ll get there. With Annie, it was really important to me, and I think to Aidy, to show the beginning of that journey when you’re not there yet. At the beginning, she is still on a diet. She’s eating weird plastic diet garbage, and she thinks her relationship with Ryan is what she deserves. In terms of TV, you have to give the character somewhere to move to, but I also think it’s valuable for people to see that.

I remember looking at women who seemed impossibly confident and being like, That could never be me. And now it is. I don’t want to say that if you’re not there, there’s something wrong, or it’s because you’re not trying. It’s just really hard and takes a long time. I’m very privileged in some ways, which made it easier for me to get here. But I’m just saying, you can do it.

One of my favorite scenes is when Annie encounters this stranger on the street and instead of going to meet her flaky boyfriend, she follows this super-confident fat woman around. Does that moment come from your own life?
It actually happened to me on the Internet. I remember starting to read fat acceptance blogs, seeing pictures of fat women just being happy and having fulfilling, fun lives and being in relationships—all these things that felt out of reach for me. The pool party scene does this in an even bigger way.

It’s just making it real in the show. It’s showing Annie having that fat awakening and being exposed to the fact that there are other ways to live in a body like hers. I can’t remember whose idea that was. It’s such a beautiful idea. It’s this dreamy little moment in the middle of that episode that disrupts this bad pattern she’s in with Ryan. She’s about to go back into this destructive cycle, but she’s distracted from it by essentially her own potential—the promise of a different future. There’s something so beautiful about that. I wanna do a whole episode where there’s no dialogue—just Annie following that woman around!

I’m guessing John Cameron Mitchell’s character is at least partially based on your own former boss Dan Savage. Has he seen any of the show yet?
I have no idea. I have not talked to him about it. I wanna emphasize that the character is not Dan. [Laughs] Obviously, the situation is based on my situation with Dan, but John really took that character and ran with it. And John made sure not to read the book. John actually doesn’t know anything about my fight with Dan and deliberately said he didn’t want to play Dan. None of us wanted him to play Dan. We wanted to create a new character to fill that role. John came up with a whole backstory, the character’s whole history. He’s a true genius.

I hope that Dan watches it and does not see himself in this character. There are similarities—he’s a powerful gay newspaper editor. But Nick Denton was my boss too. I had another powerful gay editor! [Laughs] 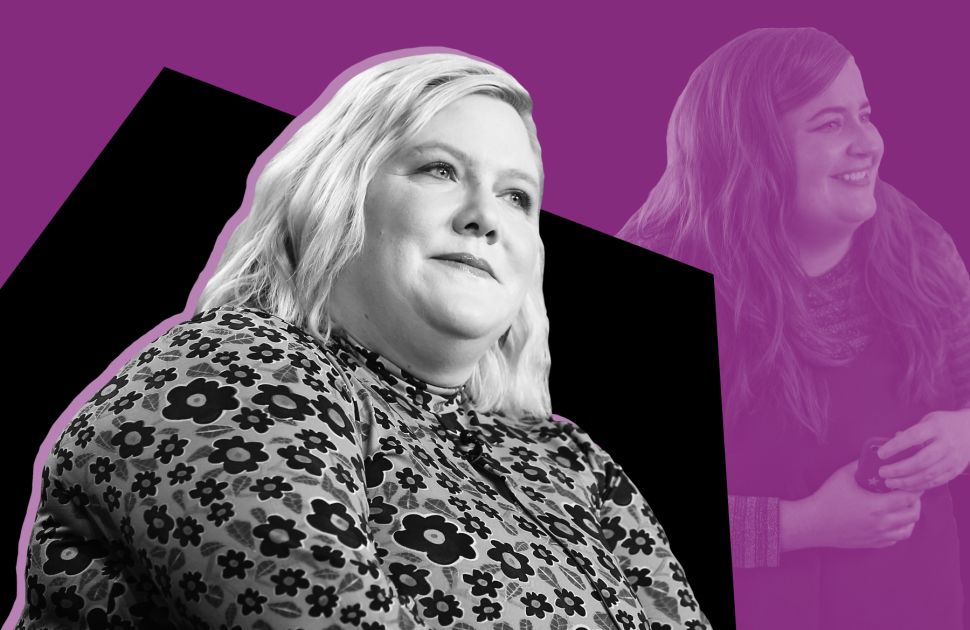